I had a heated debate with one of my students, where they claimed that this was a terrible movie, and I felt the need to defend it. I even decided to take my nostalgia goggles off and re-watch it, just so I could either admit to caring for this movie for emotional or reasonable arguments. I can now tell you all haters, cause I will prove to you that you have been wrong for years! 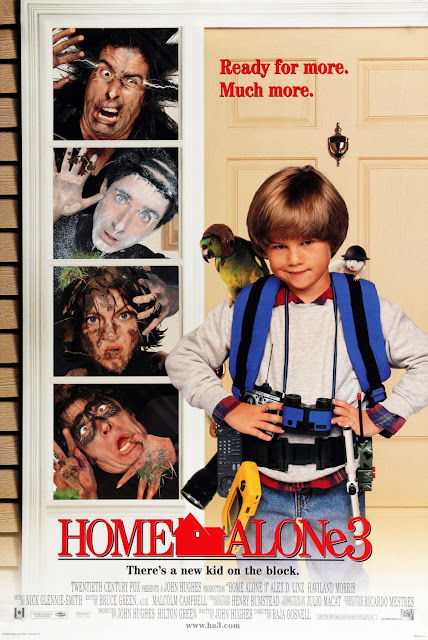 A group of terrorists plans to sell a chip to an organization, but due to a mistake it ends up in the hands of a young boy by the name of Alex. As the terrorists try to retrieve the chip in his neighborhood; not knowing yet where it might have ended up, the terrorists are at a disadvantage and Alex decides to protect himself and not let them hurt anyone. 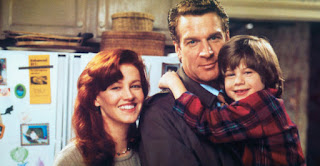 My first question is: have you actually seen this movie, or are you just part of the group of people who goes and assumes that sequels are worse than the originals? Because I am fine with you not liking it, if you have truly seen it... I saw this when I was either eight or nine, a friend lent me their VHS tape, and up to today, I have to say, it is not nearly as bad as they make it out to be. I will now list the things that I think make this a good movie with a great premise. One, there are no spiders in this movie. Two, as far as villains are concerned, I was always disgusted by the two bums/burglars in the first Home Alone movies, because that is real, that is something that can happen to me, that is something that I am literally scared of. And the thought of being a small child, who can come up with things (and I can't), to protect myself was never reassuring. 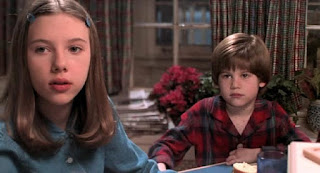 Three, I hate the idea to be forgotten by my family. It is literally the worst thing I could think of that can happen in my little life. My favorite thing about this movie is the fact that everyone cares for this little boy: his parents are not leaving him alone because they forgot him! Actually, they spend all of their time making sure that he does not have to be alone. The mom cancels meetings, the father puts off flying, they make sure the older siblings come home sooner... really the circumstances are just so much more real that it reassured my little heart. His brother and sister too might tease him, but once it is outsiders who want to hurt him, they step up and protect him. I like the way this family is set up and I like the kindness they teach to their son. Four, his sister is played by young Scarlett Johansson, and if that is not reason enough for you, then maybe I should give up convincing you at this point... Five, looking at the enemies, it might be a stretch that he can defeat terrorists, but I thought of it this way: they are not used to pranks, they are used to professionals. The latter I think are far more predictable, if you work in the same environment as they do. And this argumentation also goes for the first two movies, because we all know that people cannot comprehend a little child beating adults... and I might agree with you, but then this is the part where you need to admit that you have a problem with the whole franchise and not just the third installation! In this movie, you have the smart, the dumb, the overachiever and the so called professional... ultimately they are all just there to be comic reliefs, and they do a fine job at that. All of these movies are enhancing physical comedy, do not act as if the final showdown between Alex and them was not what we were all waiting for. And even that did not take more than 15 minutes, which means that this movies spent a good amount of time setting up the story. 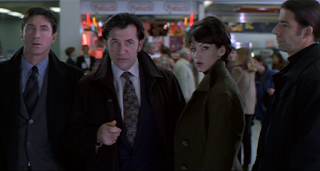 Six, and my favorite, Alex is treated unkindly by the bitter old lady next door, but when she needs help, he goes out of his way to save her. He was kind to someone who was mean to him, because that is what he was taught! This is a great kid! Even if I understand Kevin's struggles, I wouldn't going around saying what a great role model he is... Again, I understand it, I was kid too, I too dreamed of having the house all to myself, but I simply cannot, no matter how many people love it, watch the first two without feeling in my stomach that this is wrong... which should have been the moral lesson of it... but was it? I mean really. Alex even calls the police, I mean come on, this little boy is a model citizen! The one thing Kevin has got going for him is the fact that he protected his home, but he could and should have called the police sooner... I'm just putting it out there, but did he? I dunno, I hate those movies, I haven't seen them in a long time. Anyway, this sequel movie is not a 4,4 imdb... (fine, the final scene with the women and her broken bones was a bit too much for me too, now, as an adult!).

In the past years I have started to grow a resentment towards movie that try to be more then they are... no, I will not get invested, no, I will not think about it, no, there is no further moral value to the story! Even if you include character development, to me an action movie should be about action, romantic ones about romance and superhero movies about superheroes! Some movies can be so pretentious and you sit there questioning why you wasted 90 minutes of your life for? This movie was meant to be a third movie, to a classic, with a whole new cast... let's be honest, it could simply not be good enough for anyone, the playing field was not leveled at all! I am sure you can name other sequels like it. And yet, based on what I listed up here, I think it deserve a re-watch on the part of everyone who hates it for no other reason than it missing Kevin or anyone from the cast of the original two.