What's The Next Item On My List? While You Were Sleeping

In the vain of old movies that made a great deal to me, I decided to write about one that is also a Christmas movie in my book. Perfect for the holiday season!


While You Were Sleeping Lucy has spent all of her life hoping for more: family, love, traveling, everything really that would make her feel like there is more out there. One day, she rescues a man who falls onto the train tracks and by a mistake, she ends up being surrounded by everything she ever hoped for, and even more. But she cannot go on without telling everybody about the mistake that made everything possible. 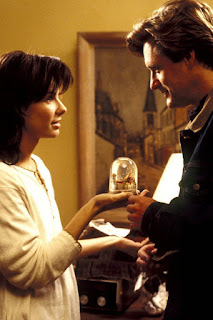 I think I was about six when I saw this movie for the first time, and I have seen it at least 20 times, in English... and in Italian... and well in Hungarian too. Gotta say, dubbing was quite great back then, a lot has changed since then. Going back to the movie, it was also the film that got me to fall in love with Sandra Bullock, and my love for her has never ceased to exist. She is one of the best actresses I know out there, and it is always an absolute pleasure when I get to see her in literally anything. She makes every movie wonderful, even the ones for which she receives Razzies, seriously, I loved the bad movies too.
This, however, is not bad, it is beyond awesome. When I think about all the stories that try so hard to push the Christmas spirit down our throats... here you have someone who just wishes for her never ending loneliness to be over. I love the scene where the family celebrates Christmas a few days later, because family and holidays are about the feeling, not a date in the calendar. I cannot even imagine what I would feel like, if my son ended up in the hospital on Christmas. To follow, even if he wasn't about to marry the girl who saved her, I would still be thankful to her and cherish her for taking care of him. And on that note, to find out that she is such a sweet girl? You know, I also love the small but important lesson, that sometimes good people are alone. Most of us suffer from loneliness, at one point or another in our lives, and we end up asking the question of "What is wrong with me?". Particularly in the Christmas season. This is another reason why I hate those romantic movies, that have people already in a relationship and then they find their true love like... you were about to settle for something you don't really want... that isn't in the least romantic. Good commentary on society's pressure though. 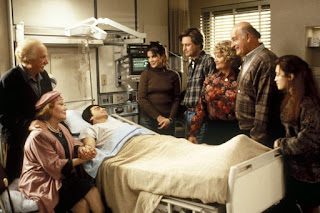 So here you have a heroine who seeks her prince charming, and she finds him in the most unlikely way possible, as he turns out to be the brother of the  man she wanted in the first place. All of her life Lucy did one thing: she did not settle for less than perfect. That is the main reason she is alone, and the movie very smartly showcases how the pressure of the holidays can weigh in on someone's loneliness. This pressure made her forget that she wants the kind of real love her parents had, not just something to get her through this time of year. It is when she realizes her real feelings, does she conclude that even if she has to be alone again, it isn't worth ending up with someone she wasn't meant to be with. I find that to be a wonderful moral lesson. Moving on from that, another thing I loved about this movie is the side characters: I am fed up with romantic comedies where the main character's best friend is an asshole. Parents, grandparents, siblings... everyone in this movie is charming, but down to Earth at the same time. Okay, I just realized that I could go on for hours about how great this movie is! You should just watch it.

Conclusion? How have you now seen it yet? I honestly fear for everyone who missed out on wonderful movies from the 90s that did now fall into the same terribly boring tropes that were brought on by the second half of the 2010s. I'm sorry, but if you look around, most movies are about the same things lately and here you have a festive holiday film with lovely characters and a lot of little stories that make me want to re-watch over and over again.