I wanted to wish everyone, even those who do not celebrate it, a wonderful holiday season, and ask them to stop for a moment and be thankful, really thankful, for the things they have. Now, an unlikely holiday treat, a movie about turkey's: 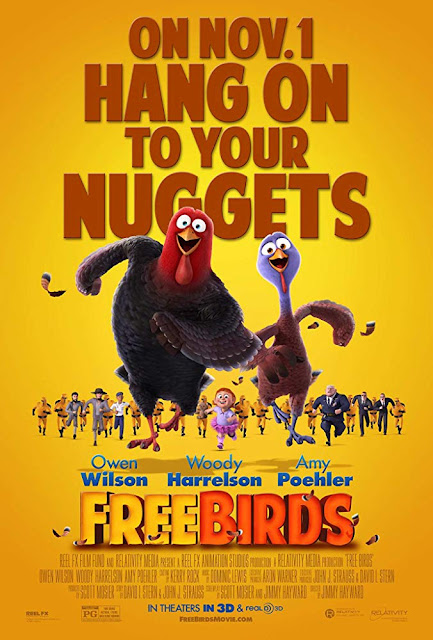 Two turkeys steal a time machine and travel back in time, to make sure that they are not the menu on the first Thanksgiving back in 1621. At first, they are hesitant, but slowly realize that being among their kind might have more to offer than 21st century technology... 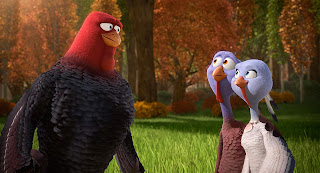 I need to say that I am terribly mad at this movie. The animation on the birds is fantastic, but when it comes to the people... not only was the quality terrible, but it felt like I was watching another movie. I understand that maybe that is what they were going for, or at least I hope, showing the ugly within humans, but dear lord it was just hard to look at... and that made me super mad, because this movie had some wonderful jokes. It is essentially a children's movie, but there was some great buddy comedy, and physical humor that did leave me breathlessly laughing at times. But the trailer fooled me, because I thought there would be more jokes, and I definitely did not see coming the horrible animation... To me this movie is just a one-time thing in its entirety, but as far as my favorite jokes are concerned, I could rewatch it anytime. That is also a reason why I know that they had good things on their hands, but it just didn't entirely come together in the end. And, need to admit, the story itself wasn't bad, just the arch of the villains... give me more to care, the only reminder that the evil humans will eat them isn't enough for me. Think of great villains from Disney cartoons, or even Dreamworks: they might not be good, but at least they look good! Give me a real conflict, make me care, get me involved in a story about turkeys! You know you will not make anyone turn over to tofurky... but at least try to do that with good animation. No, I will not let it go.

Watch it? Well, there aren't many Thanksgiving movies out there, so I do recommend a watch, and the little ones waiting for dinner to get done will have something to do for a good hour and a half. It is not one of those cartoons, however, that is intended for a mature audiences. You have seen this story multiple times, but now it is with birds. If you like time travel and funny physical humor, you'll be in for a treat.