My fascination with movies from the 90's comes from the fact, that I grew up in the 90's! I kept seeing parts and halves of these movies in TV and later on, like today, I wanted to recall what they were about, what the story was, who were the actors, if I remembered correctly that I liked them or if simply they stood the trial of time. One of my favorites of this kind was this very movie, which I think I have seen a hundred times, and even today, when I feel strong winds coming, I feel the need to re-watch it! 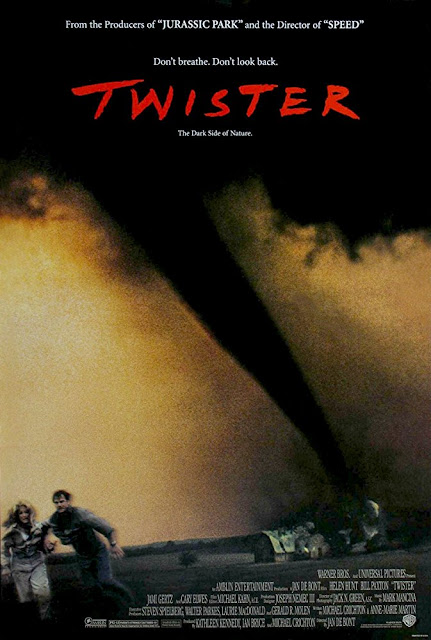 A young group of scientists wishes to find out more about the structure of hurricanes in order to help those who live in areas where tornadoes are frequent. One of the leaders of the research is divorcing her husband, who is stuck following them around to make sure she signs the papers. 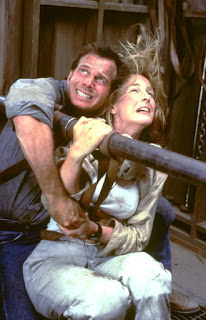 I don't even remember the first time I saw this movie, my brother cared for it and we recorded it on VHS back when we lived in Rome. I think I saw it in Italian more times than in English. Something drew me to this movie, it might be just the fact that I care for the little towns in America. All my life, it has never been the big cities that attracted me, for one exception, Chicago, but I think that was more due to my favorite shows being set there, rather than wanting to live in a big city myself. Getting back to the point, I am fascinated with this movie, it is one of those that I could watch back and forth over and over again. I love the actors, I love the story, the colors, the songs, the small jokes, but the seriousness of it all as well. The movie works on several levels, on the whole it is about a divorce, and there is this great metaphor for the hurricane being their relationship too, at least in my opinion. The individual characters too develop as they face off the natural monster in front of them, and it isn't only the main characters who learn their lesson the losses they have to endure because of the life they chose to lead. I know that my review is a bit all over the place, but what you all need to understand, is that the longer you keep thinking about this movie, the more aspects of it you get to understand, and each opens another door. Oh, and there was a book, of course, this is an adaptation, but still, the glimpse that we are given into the life of these people makes me want to go back on this adventure with them every single time.

Watch it? Definitely. I think most people my age have their favorites from the 90's and I personally keep going back to it because the way movies were made, the way stories were told, was simply different. There is a simplicity to this movie, it doesn't want to be more than it is, it does not want to teach you the ultimate lesson on life or relationships, and yet, somehow, it still does. If none of this makes sense, just go watch it!