FRESH FROM THE THEATER: Ocean's Eight

I have been waiting for this movie since the minute they announced it. My best friend introduced me to the original remake series with George Clooney, and I wanted so bad to see it with him, so we watched it to celebrate our final state exams from university. 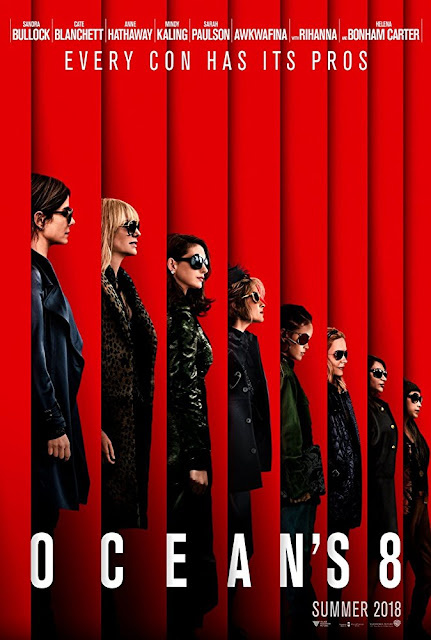 Once released out of prison, Debbie Ocean decides to do a big job in order to get revenge on the person that put her into prison. She requires a crew of eight in order to be able to pull off a jewelery heist she had been planning for five years. Not only does she get what she wants, but she does that with style! 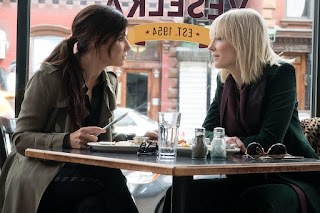 The moment Sandra Bullock comes on screen I just lose my mind. She has to be my favorite actress, I swear, there is no one like her out there.  I cannot think of one movie she has been a part of that I don't adore. I always forget somehow until I see her on the big screen and I just stare in awe. Counting, this being 8, maybe we'll have Ocean's 9 and 10, who knows? I would love that, because although it is a remake, it is essentially a new story as well, even if there are nods, conversations, returning cast members, the twist in the end and the heist itself were completely different. This story could exist without the originals and in my opinion that is what makes it a good movie. 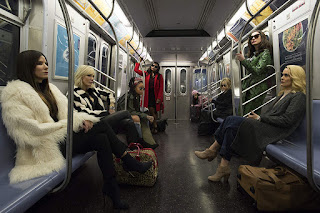 If I had to be critical, I need to add, that I feel Cate Blanchett was incredibly underused. She is more than the character they cast her for. And honestly, I wouldn't mind if a sequel focused on her a lot more, the way it did with Brad Pitt's Rusty in Ocean's Twelve. That having been said, I cannot think of anything negative to say about the movie. It was witty, funny, creative, with great music and wonderful dialogue. I was waiting for the end of the movie because I wanted to know the twist, I wanted to see how they will surprise me and I was not disappointed!
People who complain about this movie simply because it is an all women's cast... they can go f*ck themselves. I love this movie and I wish they would make a lot more like it, and by a lot, I mean A LOT. This all star cast was simply the best thing I could ask for. I hope I will see these ladies in other adventures as well.

Watch it? Dear god yes! Go go go! I can't believe the bad ratings, I mean what the fuck is wrong with people, seriously? How does someone not recognize a good movie when they see it? What is the point of going in with expectations if you don't allow them to fade away at the thought of enjoying a story? This is a great movie. I can't wait to see it again!