I had a class on Italian movies this semester, and we covered famous Italian directors too, because they have a special style to them, and our first class focused on Michelangelo Antonioni. 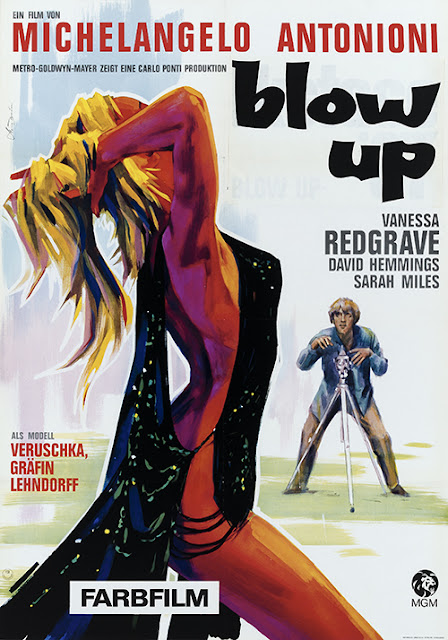 This turns into a murder mystery from a simple photographer being at the wrong place at the wrong time. Thomas encounters a woman, whose affections toward an unnamed man make for a good picture, and he ends up documenting the murder of a man in a quiet English park. He has to accept that he cannot in any way change what happened and the evidence of the murder are confiscated from him. 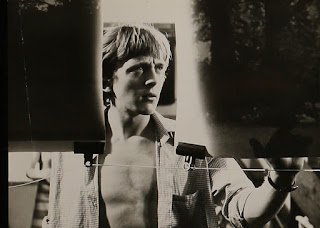 I really enjoyed this movie. First off, I had no idea what it was going to develop into, and the fact that it surprised me so much made it wonderful. I love to be surprised, I love movies that go the extra mile to add a twist that is bound to blow one's brain (pun intended). Second, the movie is simply absurd. You have a young man who does what many of us struggle with: live for the day (he stays at a shelter, then has sex with models and wannabes, has artist friends, enters a concert and leaves with a piece of the band's guitar, and so on). He is the only one around really, who is able to enjoy simple things, as everyone else bears the weight of life on their shoulders. And thus, it is Thomas who is then faced with how quickly a life can end and fade away as well (as the corpse is removed and he no longer has evidence of what happened). Finally, the main reason why I wished to write about this movie, was the ending. Each article and review I encountered detailed how the ending is questionable and the meaning of it left open on purpose. I personally decided to come up with my own version and wished to share it. Thomas, in the same park, encounters a group of mimes playing tennis in an open court. They throw the ball out and wait for him to give it back to them. He walks up to it and decides to throw it back, as if it had really landed near him. To me this was the acceptance of what had happened, in other words, the willingness to pretend that nothing has indeed happened. No corpse, no mysterious woman, no conspiracy, no robbery, just a simple afternoon in the park.

Watch it? Definitely. Some people in the class complained that it was slow, but I felt no such problem with it. It is unique, as today you would not be satisfied with an ending of the same caliber, you would need revenge and for the truth to triumph, and Thomas would probably be in danger, or something like that. This movie intends to remain simple and it is that simplicity that shines a light on a lot of very smart questions. Among them the question of how one values life.