I wanted to see this because of the cast for a long time and I just kept putting it off and off and off and decided that I have waited long enough. Let me tell you, when playing Six Degrees of Kevin Bacon, this movie is a godsend! 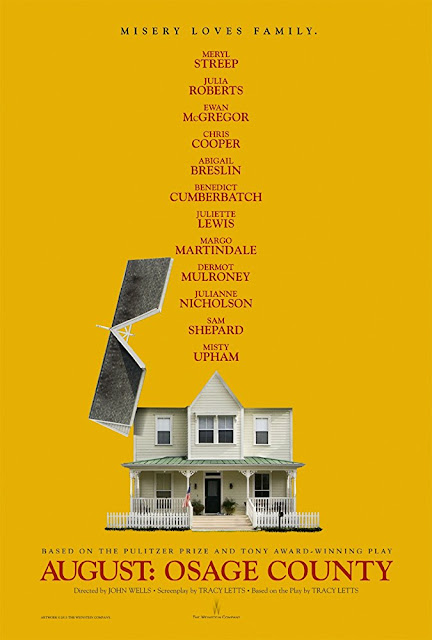 The patriarch of a family goes missing and he is assumed dead by all. His family gathers to say their goodbyes, but a series of lies and secrets come to light as none of them can keep on pretending that everything is alright.


"My last refuge, my books... simple pleasures, like finding wild onions by the side of a road, or requited love." 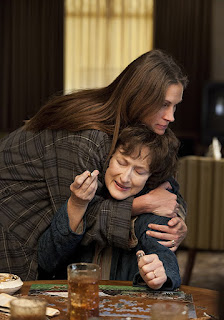 This won't be a super detailed review for one very simple reason: I do not wish to give too much away. I do not know how I feel about this movie. You see, as far as acting is concerned they have cast the best people. I am sure that actors have won several awards with their performances, as this is originally made for stage, and the script itself is marvelous. That said... the messages are quite mixed. I just do not know what to think... This family is f*cked up alright, nonetheless, their interactions are spot on... this is not just for dramatic effect, truly, what I see here is something that I have had in my own family (that's a joke, allow yourself to laugh!). But what is love? What is blood? The story raises a lot of questions and doesn't really give an answer to them. Sometimes the end does not justify the means, and I think this is what is at core here. All these people have been forced to put others in front of themselves and resent those who were selfish. How can one go on living without ever putting themselves first? And when are you just going overboard with it? Ultimately, what makes a good mother a good mother? You have three here, who all made mistakes, and two who should probably never have families of their own because of the background they are coming from. The question that remained with me is if we are ever able to break the cycle that our families have forced us into... or are things set in stone?


"Thank God we can't tell the future. We'd never get out of bed."

Watch it? Yes. I think my mixed feelings are also a confirmation of it being a good story. I don't necessarily need answers to all the questions raised, but I am also not a big fan of those movies that just want to poke the monster in me. That said, many might still enjoy it tremendously. It is a good movie, that is for sure!