My sister and I love watching cartoons and I was waiting for this one to finally come out because I fell in love with the trailer right away! I loved the animation and the idea, not to mention the excitement over the voices featured in the movie... overall I was too excited and scared that I might not like it. But I did! 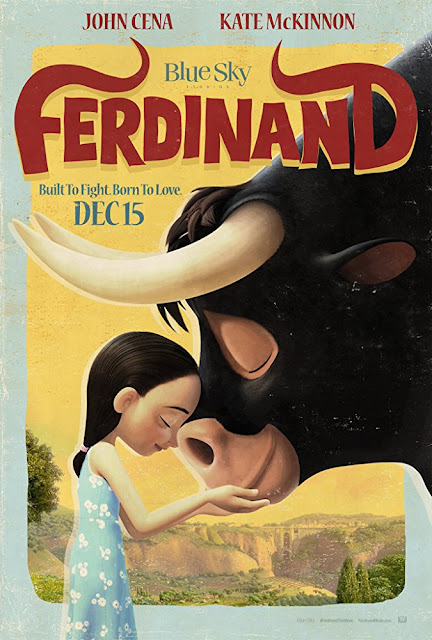 This is a story of a bull that was made to love instead of fighting. Other bulls look down on him for being the way he is, seeing that they believe that the only way to survive is to fight. Ferdinand, however, knows that even if he is the strongest, even if he defeats the matador, he will still never really win. He decides to help all the other bulls escape the hands of those who only see wild animals in them, to live where they can be free.

I think that my favorite scene of all time was that of a literal bull in a china shop. Ferdinand is mistaken for a ferocious and dangerous bull and is taken back to his old home, a place he managed to escape after his father passed away. There he finally understands why his father never came home, why people are scared of him and why his old friends believe that brute force is the only way. A matador comes to their ranch to select a bull, but Ferdinand fights hard to make sure they all get out alive.

Honestly I kept laughing and then crying, and laughing again and crying and this cartoon just kept playing with my emotions in a good way. It was not a 'your parents must die because Disney' kind of feeling, but it focused on the reality of how we treat these animals. Which, as heartbreaking as it is, is the truth. Us humans are sometimes forced into a place where we do not fit, and I loved that this story showed the same dilemma for a bull. I'd like to believe that indeed they are not seeking a fight but are forced to do it (and they are, I mean really... they don't get rage from color red, for example...). The idea of a bull only wanting to smell flowers is incredibly endearing!

There was, however, one thing that kept bothering me: communication. Ferdinand somewhat refused to say out loud what he was feeling and thinking when he was surrounded by new people. He had a new friend, Lupe, a goat that always wanted to be a coach and Ferdinand never really says out loud that he has never fought and never wishes to fight and I did not understand why. There were plenty of chances for him, not to mention that him and Lupe develop a great friendship, but he still waits for her to find out on her own. If I was forced to do things that I hate I would scream my head off...
And that is all the bad I can name. I loved every second of this movie. From the asshole German show horses to the Scottish highland cow that can't see right: It was simply adorable.

Watch it? Uhm, YEAH! I teaches children to not judge based on appearances. It also teaches you to be patient and to let all flowers bloom. We treat animals awfully... we just do. But not all of us and this is a tale of how seeing past what you think you should see might show you something that you'll love. I think that is a great moral.