What's Next On My List? Rambo: First Blood II

Growing up I was a big fan of Sylvester Stallone. And this is the fourth year that I am dedicating February to Stallone movies. And why wouldn't I? They are awesome: even the silly ones have charm to them. So please enjoy this years last review of the the fourth installment of #StalloneMonth. 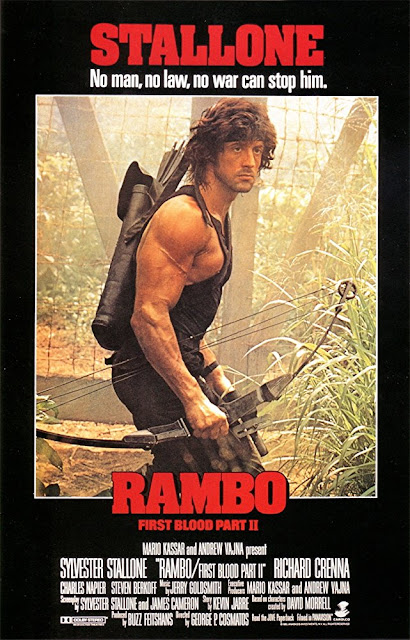 After being incarcerated at the end of the first movie, Rambo is now working off his debt. One day he is freed by his colonel from the war and is tasked with a top secret reckon mission in the jungles of Vietnam. There he discovers that his life is secondary and that it is money that decides wars and not the time and effort that the soldiers put in to save their country. At this point he becomes a one man army and he takes care of things his own way.

"- Rambo, you can feel totally safe because we have the most
advanced weapons in the world available to us.
- I've always believed that the mind is the best weapon."

Gotta say, this won't be my favorite movie of all time, but I was again amazed by the acting skills of Stallone. Rambo is not what you think of when you are talking about Academy Award winning stories, but... It was amazing to me that years passed again between movies and I could not tell. Stallone got back into the skin of Rambo as if he had never left it. This character is very different from the others he played, he is taciturn and capable and clearly suffering from PTSD, which is understandable after the hell he went through. Because of the jungle they had to include all kinds of disgusting animals and those in particular did not make this story particularly attractive to me... but that is literally the only bad thing I can say about it.

All these have the feeling of being senseless action movies, but in the end Rambo always says something that has me crying. "I want, what they want, and every other guy who came over here and spilled his guts and gave everything he had, wants! For our country to love us as much as we love it! That's what I want!", I have read articles of soldiers claiming that being told 'thank you for your service' is not their favorite thing... and I can understand that, seeing that it can become something without actual value. The Vietnam war in particular left a scar in the American society that I find has not healed yet, especially with the addition of the Iraq war on top of it.

If you have seen Hot Shots! Part Deux you will know exactly what were the things in this movie that they made fun of and I kept laughing under my breathe :D Not to mention that there is a scene were Rambo describes that he is expendable and I immediately realized that is where he got the idea for his series and I loved that! Funny thing is that if you watch this movie you'll think that it has a series of cliché, but then you need to remind yourself that this was the first one: all the cliché that you see today are based on this movie and not the other way around!

Watch it? Sure, it is incredibly satisfying to see Rambo shoot a bunch of stuff like there is no tomorrow. I will go on with the series next year, in the next #StalloneMonth, until then if you would like me to review something from his movies let me know, I am already compiling the list of possible things for the next season!