What's Next On My List? Blue Jasmine [also, f*ck the Academy Awards]

Before I head into this review I just need to get something off my chest: I f*cking hate the Academy Awards. Because... what is it really about? Is it about the best? Because if it is, then it is all wrong. What defines if somebody is the best? And do not get me wrong, I think that every actor who ever won deserves the awards they got, but so did all the other ones nominated in that category... Best movie? According to who? Because if it about the opinion of the 'academy' than I sure hope they did not award Leo DiCaprio because people kept bitching about it... (and if I have started this rant, let me add, that I did not understand what the fuss was about... he played the same effing neurotic yelling character in at least 4 movies, if you are doing the same thing you are not going to win... he did deserve it for The Revenant but otherwise fans just went nuts for no reason...). If we are awarding art... then I need to ask, why does Disney win every award in animation? And song? I mean... is Let It Go really that good? REALLY THAT GOOD? Let's ask any of the mothers and fathers who had to listen to that four-chord sh*t one-hundred times. I am tired of people getting nominations just because their name is in something... I remember exactly where George Clooney and Brad Pitt's movies got shit: when all they wanted was to get an award. I loved every single movie they made previously but I just vomit from all the damn crying they expect you to do... this guy dies, that one has famine, this is about a small town girl that can't write... I do care for these stories, don't get me wrong, but how many COUNTLESS movies are out there that never get the reception they deserve because the stupid award season comes in and highlights 5-10 movies (because they can't even keep the categories intact..) and so many others get lost... I have cried more and laughed more and applauded more the acting in a superhero Marvel movie than I did with ANY of the movies that have been nominated in the past 10 years. It is a rigged system, a disgusting one at that, and I am not even going to go into the lack of diversity because you all know it too well. No, I want to focus on the movies... I wanted to write this review because I told someone that I did not like it, and he said "The Academy Award disagrees" and I got so pissed... because I am tired of people who are unwilling to make up their own mind about something. As if I can't dislike something because it was nominated for all kinds of awards... so what? It's okay to have 'guilty pleasures', hehe, I like it even if you hate it, but it cannot work the other way around? People having different opinions is the most beautiful thing in this world and nobody can tell me otherwise. I accept the opinion of anyone, for example, even if I disagree with the Academy and am outraged that Amy Adams has not won anything yet, I accept their decision. So everyone can now bear with me as I share my opinion of this movie: 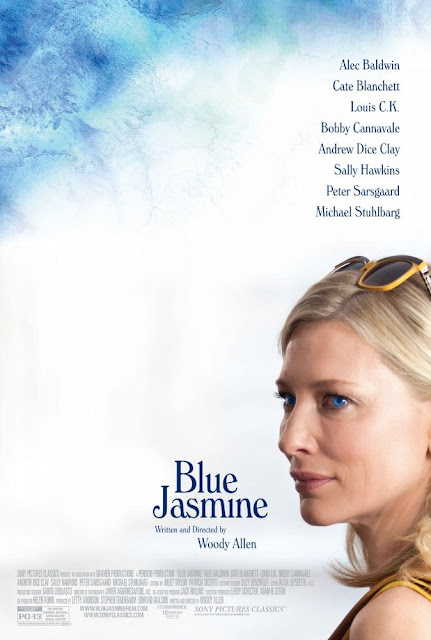 It is a story riddled with flashback, where Jasmine tries to get a new life without any qualifications and with a past that haunts her. In the present she is living with her sister, trying to study and become a self-sufficient, as previously she was always taken care of by others. In the past, she is a happy woman with a husband, but soon that marriage comes crumbling down on her as it was all built on a lie. 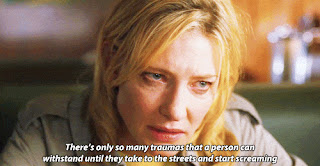 I hated this movie. And before I go into why, because trust me, there is a good reason why, I want to point out that Cate Blanchett is a wonderful actress who deserves all the credit she is given. If anything made this bearable it was her. The fact that I want to go back in time and find this script and f*cking burn it derives from everything else that was in this god forsaken terrible mess. And I am just tired of people making excuses because it is a Woody Allen movie. Guess what, Allen movies have been SH*T since Match Point (2005). All of them are done in random places around the world and he is clearly doing them so he can travel himself... he made the funniest movies that have already made history, and then he showed us that he can do serious and I was mesmerized and then... then... everything since then has been a huge fart. They are. They are all incredibly terrible... You can put his name on anything but that alone will not make it quality for me, and I can tell you that I am the one who is most sorry about all of this. I go every time saying, "Hey, this should be good!" and it never is. Having a bunch of A-list actors in your movie is not a recipe for success, you should know that, because the more actors the worse the movie...

This movie... It was slow and in the end NOTHING happened. I am not sorry to say anymore that movies that have given me nothing after I have watched them are bad movies. What was the moral of this story? What did I learn from this? This woman needs help. Professional help. Does she get it? No. For one second I felt like I was perhaps proud of her, since she did go back to school and did not give up for a long while. Then the moment she got someone who would take care of her everything just went out the window. Great. Great moral kids, if you can have someone who will pay for everything than give up on your dreams right away! Everyone she touches is ruined, and you know what? I can't really blame her, because if I look at these people apart from her they are all awful as well. Was that the moral? That people are awful? Because you know what? Home run on that department.

I know that this was supposed to be some kind of  modernization of A Streetcar Named Desire but even that was so horribly done that I did not realize it (although I have written two essays and a done a presentation on it). This is a problem with modernizing things, many times it will not work because the historical time of the story is the reason why that story makes sense. This woman needs help and that could have been given to her if anybody cared. Speaking of caring, her sister... There is one beautiful scene where she emphasizes the fact that her sister deserves better, and you know what, her ways might have been rugged, but she did mean well. Her sister keeps making terrible choices and blaming her and that is not fair. Is that the moral then? People will blame you even when you want just good for them? I mean what kind of a lesson would that be? And if it is highlight it in some way... Giving random clips of a woman talking to herself, drinking and taking pills will not help me understand her and or care for her. In the end she is blamed for the suicide of her ex-husband, as he went to jail because she gave him up to the feds. Honestly... if you can't handle being caught don't do something illegal. I am sorry that she blames herself but do not care that he killed himself. That is how little the movie has done to make me care about any of these characters. He died? Tough shit.

I am just done. Don't watch it. You know why I did? Because I thought I should. I thought, hey, so many awards, hey Cate Blanchett and all these actors I love, I'm sure I will enjoy it. I did not. I kept asking myself why am I watching it. If it had not been for me waiting for something good to finally happen to this woman I am certain I would have turned it off after the first 10 minutes. And the ending... Nevermind.

Until the next item on my list, and oh, do enjoy the award season!