As December has rolled in I am thinking about writing about movies that make me feel Christmassy, although they are not considered as such by others. Now, a lot to cover here, but first I wanted to talk about a favorite of mine from my childhood. 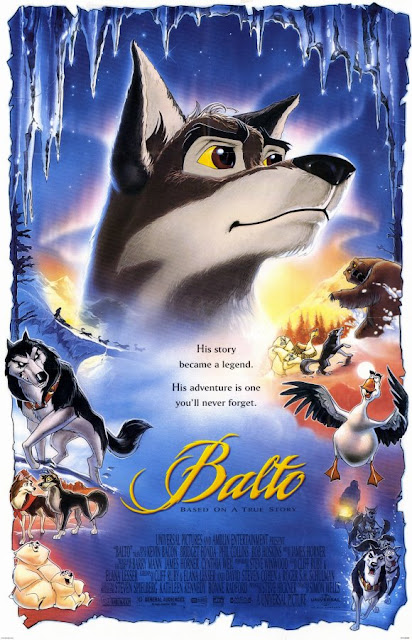 An outcast, Balto, lives on the outskirts of the town on Nome, Alaska, where most dogs look down on him for being half-wolf. For this reason he is not allowed near humans either, but that does not stop him. He has feelings for a husky girl, Jenna, and when her owner Rosy falls sick with the other children in town he is determined to help. 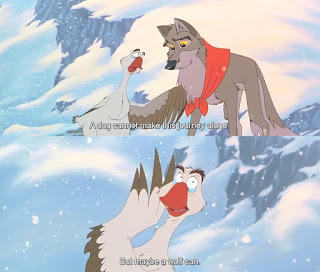 This is of course a romanticized version the story that inspired this movie. Balto was a Siberian husky and sled dog who led his team on the final leg of the 1925 serum run to Nome, in which diphtheria antitoxin was transported from Anchorage, Alaska, to Nenana, Alaska, by train and then to Nome by dog sled to combat an outbreak of the disease. The serum was transported by many, not just the team led by Balto, and actually many were offended that he was the only one receiving attention. When the other dogs were awarded for their part in the adventure Balto was not invited. (You can read up on it here!) His story is the basis for many other children's stories, out of which this cartoon might be the most famous as it has two more sequels.

Now, the snow and the setting and the story... all of is makes it Christmassy to me. The fact that there is a miracle in it just makes it that much more seasonal! Snow in general just makes it feel like Christmas to me, it might be just my thing, but I am sure others find it so too. I adored this cartoon as a child, an outcast who becomes a hero... when you grow up feeling that you might not fit in then you are sure to fall in love with this adorable half-breed. My favorite is his best friend, Boris, a Russian goose who has some of the best one-liners out there. Their friendship is very moving. Yes, I have cried several times whilst watching it. On top of that there are two polar bears that can't swim but love hugs and cuddles and I relate to them on an emotional level!

Watch it? I do recommend it whole-heartedly. It teaches a lot of good lessons and it is a good reason to look up real life heroes. It is a wild and very adult adventure but with no real losses or tragedies (compared to a Disney movie, for example). It also has an outstanding soundtrack!