Why Should You Enjoy Scooby-Doo In Spite of Public Opinion

Of course nobody liked it, I am yet to find someone who will enjoy a movie made of a childhood favorite, but here is the thing... I hated the cartoon and I looooved the movies! You can sue me if you want, but I'll tell you in a minute why you should love them too! 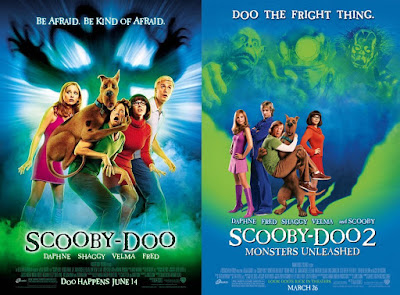 Funnily enough the first movie starts with our team deciding that they have had it with the way everybody is forced into a stereotypical role. They part ways and are brought together after some time by someone who seeks revenge. But when they are together again everybody is finally the opposite of the annoying characters they used to be! The lesson here was to learn that they worked better when they are together, but each made an effort to become a better person than they used to be. If that is not a good moral lesson I dunno what is! In the second movie on the other hand you have the ultimate lesson: the real monsters are people. This is something that the cartoon strongly focused on and I'm not gonna lie, I laughed hysterically at multiple jokes in the second movie. I could go into detail regarding the plot, but I don't see the point of it, because that is not what makes these movies good for me. 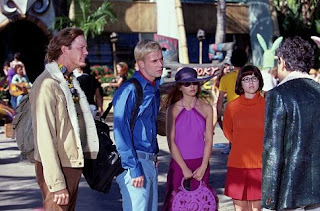 Here is my question. Besides the movie deciding to say straight out what you already thought: Shaggy is a stoner, and Scrappy Doo is an annoying little shit, Fred and Velma have a thing for each other, what exactly is your problem? I mean honestly I enjoyed the fact that they managed to surprise me 100% with a twist in the end (in both movies!). And that is what every single episode of the cartoon used to do. I did not mind the changes because I loved that Daphne kicked ass, she is not just a pretty girl. I loved that Fred was no longer the exceptionally fantastic guy that everybody falls for, he is simple, just like his friends. I also adored the fact that Velma is not smart because she wears glasses, but because she actually learns. If you want to tell me that the cartoon was not based on stereotypical notions than you are f*cking lying to yourself! Nostalgia goggles much? I have another question: You have seen all the other adaptation, starting from The Flintstones to comics like Marmaduke, not to mention the abomination that was Jem and The Holograms, which all ultimately took something and decided to teach us NOTHING. Now... if you compare it with that, is Scooby-Doo that bad? Be honest. You can argue with me that the acting wasn't to your liking, or that you thought the twist was dumb but... I mean come on. Open youtube, watch an episode of the old cartoon and tell me what is different. 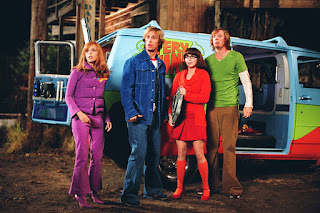 Here is the thing, I accept it if somebody did not like a movie per se, as in there are hundreds of reasons why you might not enjoy something. My problem is that these movies were aware of where they came from and they wanted to make a satire. It worked! The cartoon was stupid and the movie is aware of it. Second, you can't have anymore female characters whose sole purpose is to stand by the two sides of the best looking male character... you just can't. And if you don't understand that story-wise they needed to have, what's the word, a PERSONALITY, then I don't know what to tell you. 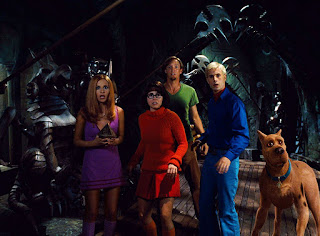 Third, you will never have a version of this story where Shaggy is a likable character, because he is the stereotypical 'anti-guy'. No wonder Fred is portrayed as invincible. You might relate to Shaggy if you too were not the quarterback at your high school's football team, but besides that can you defend in any way a man who finds comfort in the arms of a giant dog? (Yes, I said it!). And yet I did not hate him in the movie. He is by far the most adorable character in the first one, as he is happy to have his friends and family back. He has the purest soul of all of them and that makes him a far more advanced character than the cartoon ever was. I especially liked the idea that he knows his place. Yes, he is a person who scares easily, but he knows his place within the group: he is not the hero, just the sidekick. And Velma in the end asks for his help and he becomes a key element in solving the problem. If you preferred him as a passive member of an active team, screaming with terrible one-liners, again, the problem is with you, not the movie. 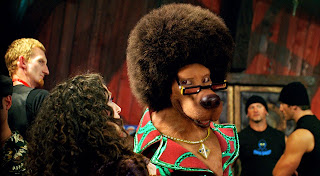 I am not saying that these are the best movies ever made, but the hate they get is beyond my understanding. I have seen far worse movies with no moral lesson, no story arc, no real idea behind it. I honestly feel that somebody who loved the original decided to elevate it and in my humble opinion they did a good job!

Watch them again? Please do. Do it for guilty pleasure, do it because your thoughts have been so obscured by the fact that everyone around you told you to hate these movies. Re-watch it also because you watched it waiting for your childhood to be re-lived, but this is a satire. Watch it as such and don't let your memories overwrite the experience.