Oh I forgot to review this! Sorry about that, I have missplaced my notebook with all the reviews I have planned... kinda knew that with the semester starting that is a possibility. Nonetheless, here we are back to good old comic book movies: 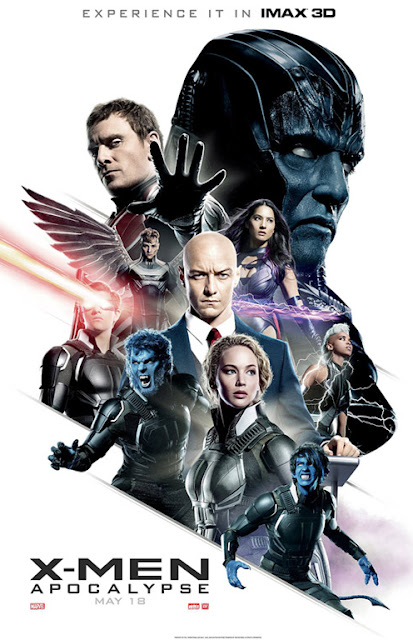 One of the strongest, some say oldest as well, mutant is awaken from their sleep. He is Apocalypse, who seeks to be the most powerful and is unaware that the world has since yielded a lot of mutants. Not only that but mutants who don't seek to be gods, but wish to be mere humans. He recruits four as the horsemen of the Apocalypse and prepares to shape the world into his know, however, the X-Men will have none of it as their fight to prove to humans that not all of them are evil. 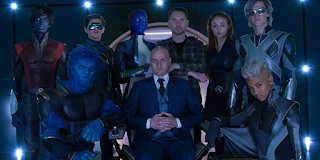 I had no expectations really, going in, I had a fear that it would be bad and simply because Days of Future Past was such an extraordinary and wonderful movie. And altogether I liked it very much. I agree that Mystique should've been blue more often and well, I find that a lot of characters were underused. Now, yes, there is a billion of them, it is easy to have them fall under, my only problem is that there is really no need to introduce every single effing character from the comics if you won't be able to use them properly. There were times as well when you felt that they are trying way too hard to make up for mistakes of the past. The new Jean Grey was adorable, the new Scott still has to become... well, himself. What I lacked and what was set up in First Class is Mystique's background story. There is one rendition of the comic in which we find out that she is Nightcrawler's mother, fathered by Azazel, who was in the first movie. Not only that, but the beginning of Days of Future Past is about her finding pictures of Azazel as he was experimented on. They had a connection, spent time together, their union was somewhat foreshadowed and now here we are and NOTHING. I was hoping for that to be unraveled...

Going back to it, the villain was alright, some X-Men showed previously unseen talents, there was a nod to X2 again, which I liked and well, Magneto... Oh dear Erik... I gotta tell you, somebody has to be in charge of building his character. I actually enjoy very much how each movie focused a bit on his back-story. We care for him because that is how he is built but man... you really do get why he hates humans so much. He keeps repressing his inner self and even an act of kindness has a punishment following it. Despite how much pain he has been through he too understands right from wrong and that is what is maddening to him above all.

Watch it? Yes, I do believe it is an entertaining movie. It does not go into depth on moral and teachings. It's more like a simple story, but it is done well and you get more of your favorite characters. Turns out that those who want good for this world are willing to put themselves in harms way for it and that alone is a great message. Could it have been better? Gotta say, yes. But that's just my opinion.