In my sci-fi class we are coming to robots and androids and we had to read a very good essay that detailed almost all available forms of AI seen on TV shows and movies. While reading it I kept remembering someone who should have been included in both that list and the list of aliens that pose a threat to us humans: 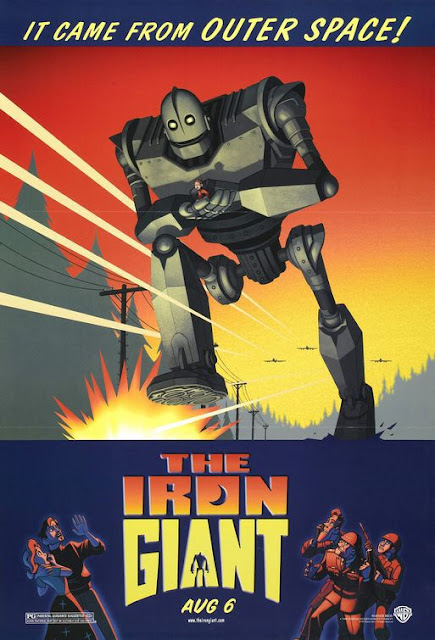 Hogarth Hughes stumbles upon a giant robot who behaves like a big puppy due to a blow to the head that made him forget his prime initiative. Hogarth becomes friends with him, cares for him, and together they go on adventures. However, the robot's arrival on our planet didn't go unnoticed and Hogarth has to help him in order to let the government see his isn't evil. When the giant robot's head wound heals we do find out that perhaps his mission on this planet was really more than making friends with a local boy. 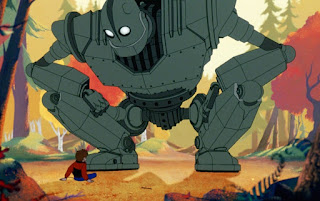 This movie came out when I was just 8 years old, and writing that down is surreal because I'm not even that old... I fell in love with it immediately as the story was centered around a small very American town, where everyone knows each other and strangers stand out in a crowd. Hogarth doesn't have many friends, so he gets affectionate right away, and you can easily tell why: this is a dream come true. Think of all the movies that deal with alien encounters. They are either the reason for comic relief, because they don't know our planet (E.T., Earth Girls Are Easy, even Thor!), but they can also be the villain. Now, with Isaac Asimov's three laws of robotics you have a shorter range of possible stories. In the end the robots either want to become us or take over because of years of humiliation. I can only say that it is a pretty good social criticism when we look at how robots are used and abused in certain stories...

Here you have both. First of all, an alien. Second, he is a robot. Third, he is as a comic relief character, same way as anyone coming into contact with the unknown would be, and on top of that, they are also a killing machine. The giant's real purpose was destruction. He is the villain. I can't really say that the government was wrong, and that they are the antagonists, because we find out that indeed the giant wished to attack us. Their salvation ultimately is the fact that this alien-robot is capable of human-like emotions. His connection to Hogarth was their salvation. Now, after reading Dan Dinello's chapter, "Cybernetic Slaves", I had to ask a lot of questions. You see, the Iron Giant is a good example of how many strive to be human, but have an initial programming that doesn't permit them to get there.

My question is, was his alien qualities that added his humanity? Was someone else in there? Were aliens who created him aware of the fact that he is capable of emotions? Is that the standard on their planet? I am asking these questions because that is what a good story does: it makes you think and think. I don't have the answers to those questions, and that is alright. I'll just rewatch it a couple of times and see if I find anything new! This movie in particular portrays a whole new world of ideas within a story that you have heard a thousand times before. Its ability to make it new is incredible. At first watch you are moved, at the second you laugh at the jokes a bit harder, the inner conflict of the main character and the giant both resonate with you, but when you grow up... you just really want to know more. More because this too was made by mere humans who were clearly familiar with the sci-fi background before making this movie. I just want to have coffee with the makers, is all I'm saying! :)

Watch it? It is a childhood classic. I think it teaches you to fear the unknown, but also to embrace it. To showcase how adults see the world differently from children, and that is alright, as long as you are willing to listen to the other side. I also find that it captures the kind of adventure we all dreamed of as kids and seeing it come to life is a real treat.