So, this summer I decided to compile a list of all the movies I have seen in my life. The list is of course well over 400 already, and I haven't collected all of them just yet. This made me realize that I have a lot to write about as well. I do cover new movies, but as you have seen, I certainly write about older ones. Why? Well, those awesome 90s movies that did not have the fortune to be advertised online still deserve credit and recognition. I am also not really picky about my choices, whether I liked it or not, I do try to write about them. With my new semester starting up, however, I will have less time to come up with ideas to write about. Luckily enough, I have class again with one of my smartest and funniest teachers and she alone is an inspiration to me when it comes to writing, and well, the topics we will be covering this semester are perfect for my blog, so I decided to post entries about them as much as I can. First up was Simon Pegg and Nick Frost's movie: 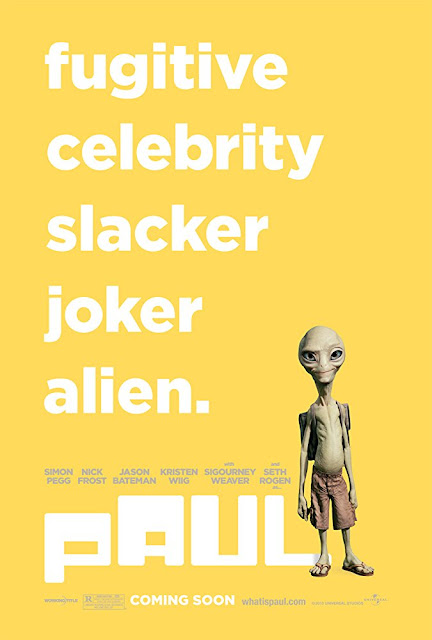 Two good friends, Graeme and Clive, a writer and his artist friend, travel to America to go to comic-con and during their trip across America bump into an alien by the name of Paul. Paul's life is in danger so he decides to run away, and the two friends help him, while coming to the realization that this is the kind of adventure they always dreamed about but never thought could have. With twists and turns, they make friends and enemies along the way, but never give up until they are sure that they did everything they could to help Paul in his mission. 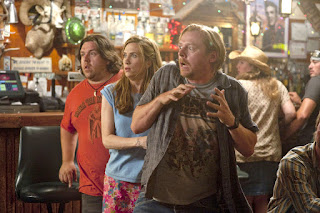 I just f*cking love this movie sooo much! This. This right here is my dream come true. OK, not the alien part, but everything else: from the big comic convention all the way to the little American town with one comic book shop... it was perfect. I just really want to go to comic-con... just once in my life I want to be in the same room with everyone else whose life was changed and touched by a comic book artist, character, storyline or a simple drawing or altogether a fandom devoted to a story. I really don't know who I would be right now, had it not been for Ultimate X-Men, Star Wars, or all the manga that I bought weekly on the corner at the newsstand. This movie features two men who dream of making it in the world they love so much. I am fairly certain that not long ago not only where geeks picked on, but makers of comic books too. Yet... narratively speaking some comics beat classics! (And sometimes even Nobel prize winners write comic books!) While watching the movie not only do you fall in love with these two, but at the same time you realize that every dream you had, no matter how dumb you thought it was, is worth fighting for. 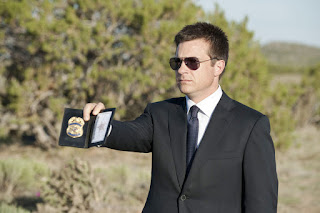 Second, the alien... although encountering one wouldn't be my dream, I gotta be honest with you, this alien in particular this one I'd love to meet because he makes you fall in love with our planet. Think about it, most people, those who prefer living in a sci-fi world especially, don't really love our reality. It may seem bleak and dark at times, not to mention filthy. But here is one guy who was glad to stay on our planet. He likes what we have (weed, Reese's Pieces), we are told that aliens are fashioned after him so that when an encounter happens we are not frightened, he speaks our language and decided to give up himself as well in order to help us humans. Paul's character for me was a beacon of hope, someone who emphasizes that hey, life is great and you should take control! 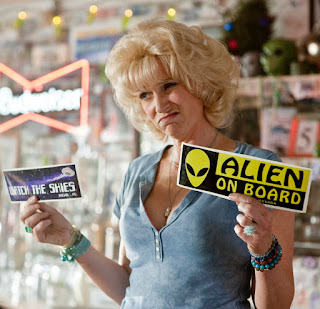 Now, this movie not only has awesome characters, but some of the best jokes. It has on going gags ("Three tits? ... That's awesome."), and it shows you really any and all kinds of people you can come across with in America (the dumb geek, the actual asshole idol, kind open hearted waitress, the bullies, the devoted Christian and the obtuse Christian). All of this wrapped in contemporary popular culture references, that will actually outlive all of us and be funny years to come. I doubt you'll find anyone who didn't fall in love with at least one, if not all the characters. The end also holds one of the best fight scenes ever recorded (it involes Sigourney Weaver!), and while watching the movies you will realize just how funny actually cursing can be when it is done very, very, very badly!

"- Fuck-a-roo, that was the best titty-farting sleep I have ever had.
- I got a feeling that you're new to cursing, Ruth? Look, cursing's fun, you just gotta pick your moments, okay?"

Watch it? Abso-f*cking-lutely! If you don't think that Simon Pegg is a genius by now, then you have a lot of catching up to do. This movie warms my heart and I will rewatch it every time I can. You need to see it for the actors, the story, the gags, the alien experience and for that little child that you, and all of us, still are at heart.