See the problem with growing up with quality movies is that you expect everyone to give you the same level of proficiency... and they won't. The reason for that is that people are unique. People have a way about them that cannot be imitated and despite it being a beautiful thing when it comes to us humans, still... it means that if we lose that star we will never get them back. It was the case with writer Nora Ephron who I consider to be an inspiration in my life and a guide for the kind of stories and characters I want to write. I wanted to take an entry and devote it to her because I did not when she passed away and that is something I have regretted ever since. "I am continually fascinated at the difficulty intelligent people have in distinguishing what is controversial from what is merely offensive."

The first time I heard her speak was at an evening for Meryl Streep's AFI award and I found her to be hilarious. That was when I looked up just who she was and found her name under every movie I deem to be a masterpiece. Not only do I find these movies particular jewels, but they almost all belong exclusively to that small category of movies that I am willing and able to re-watch over and over again without ever getting bored of them. If I ever make it as a screenwriter in this competitive world where everyone wants to be famous and recognized I know who I am going to thank for teaching me how to write about stories everyone will remember.


"I try to write parts for women that are as complicated
and interesting as women actually are."

And see, this isn't about fame for me. Just think about this: I came to know about Ephron through a funny speech... it wasn't because I have heard about her once and then looked up her work. She was probably very famous by the time I realized that almost all of my favorite movies were written by her. I did not even think all of this could come from one person and boy was I wrong... the minute I connected the dots it just made me laugh out loud. I should have figured it out way sooner!
Look at the posters, I'm sure you'll recognize most of them. Many of these are not your average romantic comedies. I have been driven by the depth of layers some of these characters have. First, Silkwood is about a woman who slowly gives up her will to live as everything plays against her. In When Harry Met Sally you are witness to some of the best dialogues in movie history with scenes that are quoted almost on a daily basis. Mixed Nuts is my favorite Christmas movie of all time and it has perhaps the most imperfect characters having the perfect holiday.

When it comes to movies from the 90s, well, you have a very long list of quality movies. Most of these, I am certain, will be remade in the near future by some idiot who thinks they can make it better. They can't... Think about You've Got Mail: the magic of internet dating is has changed so much that you will never be able to compare it to the innocence of this adorable movie. Not to mention taking a classic like Bewitched (1964) and paying homage to it in a way that does not try to overwrite the original but let everyone know about it who did not before. And I decided to mention these two because they are, in fact, remakes. What sets them apart is that they got the idea from an earlier script and then it elevated them onto a level of its own, making them perfect without you knowing the source material. Many times remakes fail because people add something unnecessary assuming that everyone knows the original and they can't match it - indeed they can't, so why remake them? Getting back, however, to her movies, on my list of worthy mentions is the complicated relationship of Julie & Julia, which is something to learn from... our idols might not always turn out to be who we thought they were, but if they inspire us in any way then we should take it and make the best of it.


"What my mother believed about cooking is that if you worked hard and prospered, someone else would do it for you." 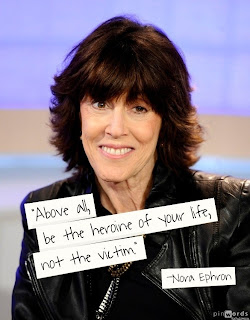 People know some, others know all of these movies. If you wish to become a screenwriter than I suggest you make sure that you read as much as you can from Ephron because I guarantee that your writing will improve. It will improve a great deal! Most movies I believe fall short because you need to have characters who show they have a real personality even if they only speak a couple of words. You don't need to know who they went to high school with but make sure you give them something that is solely about them and something that advances their story. This is what you will find in all of these movies and that is what every writer should focus on. Everything she wrote and everything she said had an impact on me and taught me something about life. She wrote about mothers, daughters, sisters, lovers who all had hard times but overcame them. Either with laughter or by simply being as persistent as they could be.

I wish Ephron was still around to write because I can tell you that we have a shortage of good writers out there... actually, no, that isn't true. Most writers are great and their ideas are overwritten by the people who write the checks, but she had an impact and a voice that people listened to and it is that influence that is missing. Either way, as long as people make movies out of books or shorts or scripts from women writers there is hope for us yet!

Make sure you check out all of her movies!
Bejegyezte: CsorEsz91 dátum: 2:14 AM