20+1 Thoughts I Had While Watching Game Of Thrones

The seventh season finale: 7x07 "The Dragon and the Wolf" 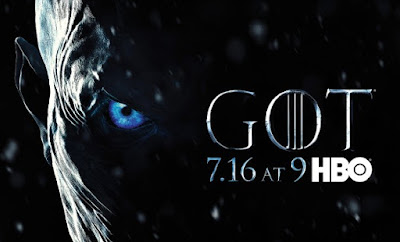 Some of you might have come across my quite harsh review of the first four seasons of Game of Thrones, if not you can read it here. Either way, I kept on watching the show and I seek only one thing: surprise me. If the show takes care of surprising me then I am more than satisfied. The last two season, 6 and 7 that is, were simply great. I am going to go as far as to say that they were the best, not just the soundtrack, the acting, or story-wise, but writing-wise. The fact that the show no longer sought to copy the books but used scripts and it made sure that you did not forget about characters, and that everyone's story went ahead made it finally above average for me. This finally made me care. This raised the stakes. Good writing is crucial. I am happy that the show got this far, but for two or three good seasons I will not necessarily recommend it to people. Nonetheless, finally everything I wanted, and it wasn't much, came together in this season and I decided to write down my thoughts about the finale. Here they are: CONTAINS SPOILERS! 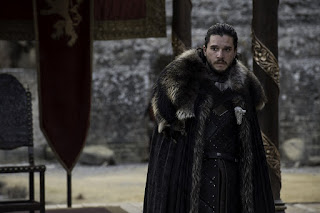 1) Cersei, after everyone arrives and sees the dragons: #UNIMPRESSED

4) Okay, maybe Euron's penis isn't that big after all. Also, if he hurts Yara I'm going to set someone on fire.

6) "You are not like everyone else." Oh Jon, did you read finally read 'How to pick up women for dummies'?

7) "She might not have been a reliable source of information", well, if she was on the first few pages of google then she definitely was not. #AcademicJoke

9) Theon: "Every step you take" ... ♫ every move you make, I'll be watching you! I wish he would start singing. Wouldn't this episode make for a great musical?

10) How to regain your manhood? Not having something between your legs isn't always a loss, sometimes, it's the best thing you can ask for! #LoveBeingAWoman

11) That smile on Arya like "I didn't even know you were on my list, Baelish." Starks take back control. 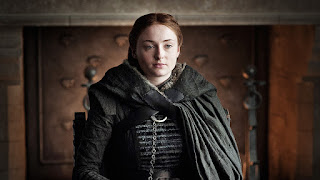 12) "I'm a slow learner, it's true. But I learn." THANK YOU! I have loved Sansa since the beginning and I knew it was headed somewhere and I adore it! #TeamSansa

13) NOOOOOOOOOOO! I loved Baelish! He was among my favorite five characters! I screamed out. I haven't done that in years. However, I told my best friend that I will accept it if it is a good death, and dear lord it was beautiful. Seeing just once in his eyes that fear... beautifully done. I will miss him but this was one of the best written scenes in seven years. Goodbye and thank you for all the chaos!

14) Cersei: "The man who murdered our father", okay, okay, okay, I get it, but serious time, he wasn't a very good guy... let it go. Her speech about vulnerability was tough and it made a lot of sense but she is about the only person who misses that monster...

15) Jamie took that "fuck loyalty" advice by Brienne to heart. I like it.

16) I love how everyone complained about the time jumps, and the creators said we don't have to, but honestly, how much time passed? Did snow fall over night? Or was that symbolizing the time passing? Sam has been traveling for two episodes now... how far was he from Winterfell when everyone reaches it within seconds lately? And if this was a longer period, why won't Jon arrive already with those super boats?

17) Bran: "I can see everything. ... why are you here?" That's great. So you only got powers to prove R+L=J, but otherwise they are completely useless. Good to know.

18) Sam's reaction to Bran being the three-eyed raven is the most genuine and lovable moment in seven seasons. "I became the three eyed raven." Sam: "Oh... I don't know what that means." It means he can't act anymore, you'll get used to it.

19) Incest is cool if you like the characters, apparently. Interesting moral lesson :D But f*ck if I'll start asking questions now.

20) "He needs to know." Yes Bran, Jon needs to. But god forbid you send him an effing raven or something.

+) Why is Tyrion staring at Daenary's door all melancholic? Is he in love with her too? Isn't he the one who told her to have an heir? What is going on? You are creeping me out. What is the point of that scene? 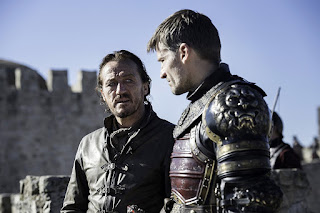 And that is all I thought while watching it. I sure hope I get an answer at least to the last one in the next season because I just don't get it. Another thing I don't get is the Night King... like, what do you want? World domination? You can't f*ck, you don't drink, you don't need gold... what is the point of this crusade? I know that it isn't perhaps the show's intent to give the villain a reason for their will to attack but it bothers me nonetheless. Wars can only be fought if both sides believe that they are in the right and how would the night walker army be ever in the right? What is good about having zombies roam around? Just the fact that you can do it? Not to mention that it will not be about a war, but about killing the Night King as we now know that the resurrections only work while he is alive. Despite the fact that I am very curious as to what will happen I wouldn't mind if the army of the dead would open their mouths and say... something. Anything really.

Interesting season this was. A good one too. A few inconsistencies but man, I think that in this story fast is a good thing.