We have arrived to one of my favorite movies of all time. This is special in every way because, even after knowing the twist at the end, you still feel that you should re-watch it over and over again. The top movie for the perfect crime list this year is: 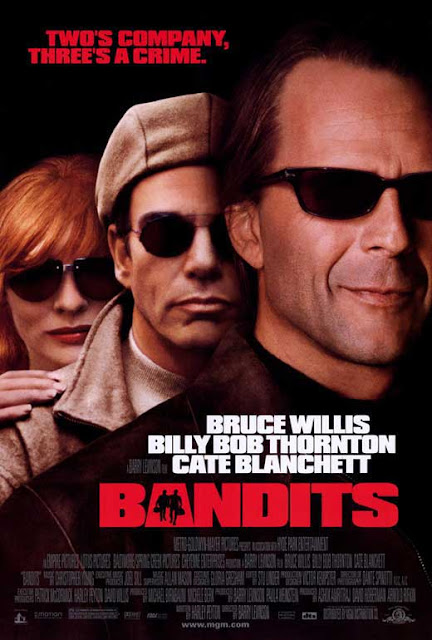 Two friends escape from prison and decide to rob as many banks as they can on their way to Mexico. They hire one of their nephews to help them and on their way encounter a woman who, looking for her purpose in life, decides to join their team. The two friends both fall in love with her and this causes their last heist to go south. 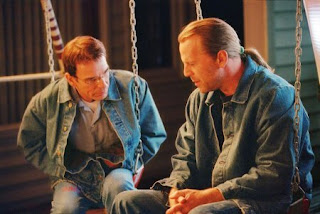 This movie was the best thing I have ever seen in my life. I could re-watch it and re-watch it at least 10 times a day, honestly! First of all, this was the first movie of Billy Bob Thornton and Cate Blanchett that I have ever seen. Gotta say, this one raised the bar pretty high for me. Blanchett was incredible... she was driven, passionate, funny as hell and incredibly sexy in this movie. I fell in love with her at first sight. Now, I already knew Bruce Willis is a good actor, yet, he shocked me here as he played someone I have never seen from him. The chemistry between the two guys and the addition of the femme fatale was some of the best acting and writing I have ever had the fortune to witness. Now comes Billy Bob Thornton, who I think played a very relatable character, which I find he rarely does. The two guys are very much the opposite of each other and it is this dynamic that makes them a perfect duo. And in the end you'll remember that they were in jail for a good reason probably... 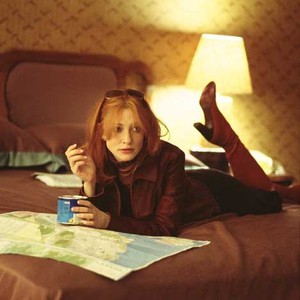 Finally, and I think most of the people would agree, this movie also stands out for its wonderful soundtrack. The story in a movie can be elevated by good music. Of course, there are soundtracks that are simply in the background and don't especially add to the story. This is not the case here! This film featured such great artists as Bob Dylan, Bonnie Tyler, Bonny Rice, Tanita Tikaram and U2. I was only ten when this movie came out and some of the classics it used were introduced to me here and they influenced my taste in music in the best way possible.
You might be wondering what could possible be the twist, and you'll be surprised, but there are more than one in this movie... first for the main characters, then the side characters and the wrap up of the story as a whole brings you something unexpected. I find this movie to be a cinema masterpiece and will lobby for more people to see it until my last breathe!

Just watch it :D This and any of the movies I have listed so far and trust that you won't be disappointed. This idea of trusting critics over seeing a movie baffles me to today... if I like that cast, the trailer, the story then I will watch it, even if it has a 3.4 or 6.5 rating on imdb. Movies are meant to entertain, tell stories, not to win awards... and the ones that do win awards are usually shit! At least in my opinion. If any of my reviews made you want to check out a movie then do not hesitate!