What's Next On My List? Repo! The Genetic Opera

What I adore about musicals is that they can be of any genre, from comedy to horror, really any story can be told through music. I, for one, don't like horror and yet the musical format not only made me enjoy but also care for the following musical: 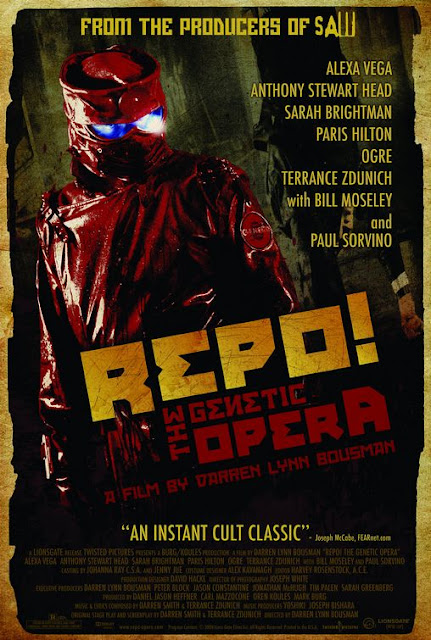 In the future an epidemic brings about a company, GeneCo, that provides organs for anyone who needs them, however, if they can't pay or they breach their contracts, then they send the Repo man after them and he gets back what is rightfully GeneCo's. Our main character is Shilo Wallace, who is sick as well, and her father keeps her closed in their home, but she sneaks out to see the world and that is how she discovers much of the horror that surrounds them. This monopolistic system is, however, close to being changed because if GeneCo is no more, then the possibilities are endless. 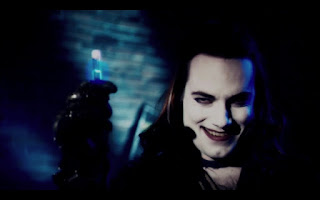 This is a strange world, but it grabs you. First of all, the story is told as if it was a comic book, with transitions that turn into drawings. This already got me hooked, because much more than brining comics into life, I love it when we are made to believe we are reading one. Second, there is a narrator to the story, a Graverobber, who finds the main character in a cemetery and introduces her to the harsh reality that is their world. This apocalyptic vision of a dark world that is dying and people being obsessed with their looks and plastic surgery is surprisingly believable. The world is no longer in control of the government, but of one company that has money. 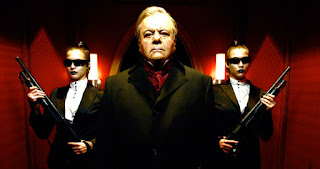 The narrator gets a material, zydrate, from old graves which help with the pain if you get a surgery, and some use it to get high - like the daughter of the owner of GeneCo. And the man, the Repo, who gets back the organs if you don't pay in time is the father of our main character. His job - to kill to get back the organs - is justified by the fact that there is not much else to do in a world where organ markets rule and everyone wants to get high enough to not see the chaos and dismay that surrounds them. Of course, there are a few twists and turns to the story that I am intentionally not revealing because I believe you should see it. If you plan a horror movie night, or if you like musicals, or just apocalyptic dystopias then you will surely enjoy it! Grotesque and eerie and chilling in a good way.


Watch it? Well, yes. Here is the problem with musical movies that are made solely for the small screen: they go unnoticed. If something is a hit on Broadway then it is likely to be a hit as a movie as well because the people have heard or known of it for years. Although most actors in this are famous, the movie was somewhat unnoticed. I'm sure it has its own fan base, and that's awesome, but it could be bigger!