First up is the musical that reminded me that I need to continue my musical reviews: 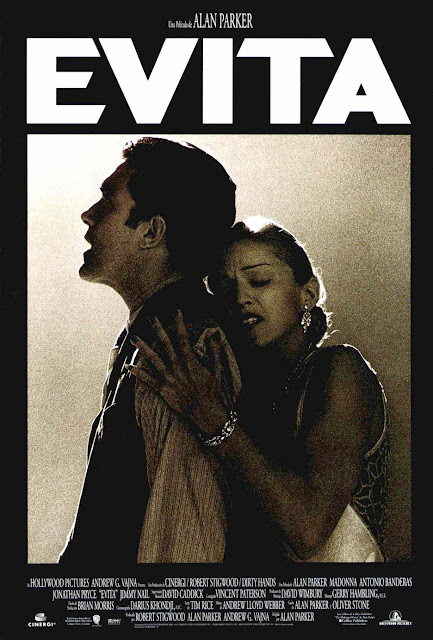 A musical of the life of Eva Perón, wife of Juan Perón, the president of Argentina between 1946 and 1955. The story details how Eva came to live in Buenos Aires and how she became an actress only to meet Perón at a fundraiser. From then on the two became a power couple and were beloved as they fought dictators and cared about the nation. The story is narrated by Ché, who appears in the background of all of Eva's life, he is both active and passive, and in the end it seems that he loved Eva maybe more than any other Argentinian. Perhaps Eva loved him too.


"Sometimes it's very difficult to keep momentum when it's you that you are following." 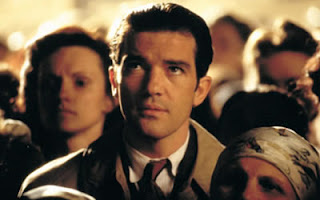 This is one of those musicals in which you fall in love with the songs more and more each time you re-watch it. First time, two or three, second, four or five and so on until you know the whole soundtrack by heart. Whilst watching this movie you'll also ask yourself why doesn't Antonio Banderas sing more?! As far as I'm concerned I would give him a role in every single musical out there :D His voice and his charisma as a narrator are essentially the best part of this movie. Of course that is arguable as Madonna's performance is wonderful. Very few movies I can think of where I was happy that a singer was cast as an actor, but here? I applaud that decision. 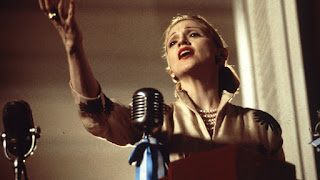 The musical of course is quite controversial. Eva Perón was a beloved woman by her people and the movie showcases parts of her life that one might not be proud of on a larger scale. She was accused of abusing her looks and connections to get ahead. Historically accurate or not, the movie does not bring into question that her charity work and her devotion to the people was done with love. She cared. She did make a difference. If she didn't there would be no musical about her, think about that! Even if there are debatable parts, the music and the narration is outstanding, the casting is literally the best of Hollywood and if you have questions regarding the story then look them up. That is the beauty of historical figures: you can always clear things up for yourself! Here is my favorite song from the musical:


Watch it? Well, it is 100% worth it for the music. You might argue that you are not a fan of Madonna, and to that I will say that you shouldn't worry, this is Eva Perón on the screen. Historical musicals I believe are the best way to learn for anyone. It makes you interested in the background, the inspiration and the reason for the need to tell that given story. I would so much recommend this movie that I'm going to re-watch it right now!