What's Next On My List? Cowboy Bebop: The Movie

Anime have been dealing with the apocalypse and post-apocalyptic worlds for decades. Anyone doing real and intensive research on this topic HAS to, at some point, widen their range to include manga and anime. I myself have actually got to know this genre through several anime while growing up. One of these was Cowboy Bebop, a 26 episode series that takes place roughly in 2071. A man-made catastrophe blew up the moon and making Earth almost inhabitable. The human race had colonized most of the rocky planets in the Solar System. The Inter Solar System Police (ISSP) established a system in which registered bounty hunters (known also as cowboys) travel in the galaxy to seek out criminals to help the police. Our main character, Spike Spiegel is from Mars and in this movie they go back to the planet to stop someone who actually is about to be responsible for a new apocalypse in the world they live in now. 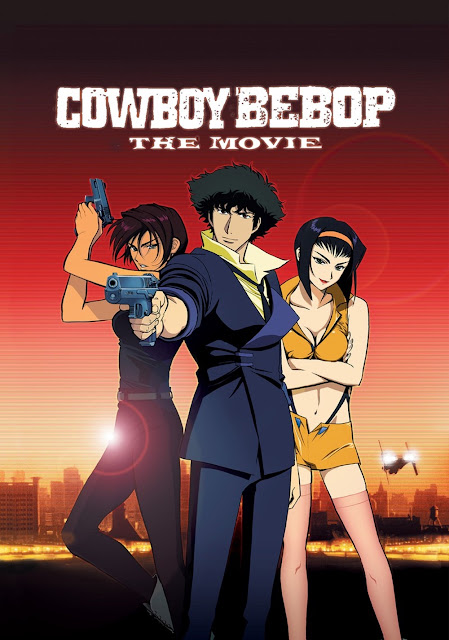 The movie's story is situated somewhere in the middle of the timeline of the 26 episode anime. Spike, Jet, Faye, Ed and Ein get together to find someone responsible for a biological attack on Mars. This man is a soldier who was used for experiments and is now trying to turn the world into the emptiness that he himself feels inside. The weapon eats up brain cells and everyone infected slowly dies. The man, along with another soldier has the antidote in their body, and the team uses it to make sure that the biological weapon never takes effect. 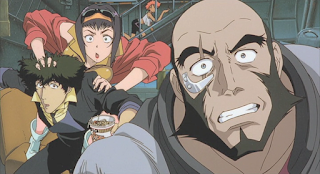 I love this world. Of course it can be dark at times and well, difficult to digest. But this movie perfectly fits into the main story. Cowboy Bebop is known for having mysteries, allowing the viewer to think about what is happening before revealing the truth. I personally adore that. Not so much the suspense, but the fact that it is clever about it. It gives you just enough to keep on going. In the end it is more like detective fiction, than anything else. In the series there was actually one episode that had a noir style to it. Long story short, these are not your average bounty hunters.

I particularly love this anime because it shows that even if technology advances, people will go back to something they already know, something they are comfortable with. Cowboy very much entails a Western American culture, and there are several instances when the show makes fun of it too. Cowboys on their horses running after criminals. Well, spaceships. And where man is man, there will be wars, conflicts, drugs, everything that is just as destructive as it was on Earth before it got destroyed. It seems that men never actually learn, and that's a powerful message. 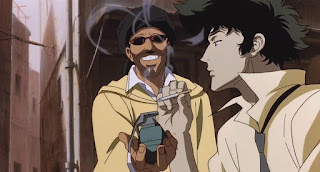 Now, the movie, as I said, fits perfectly into the universe and personally it was a gift as the show ended and I craved for more. The writing was brilliant, in my opinion. The criminals, or villains, they all had a background that added to the story. This is one of the reasons why it is important to highlight that our main characters are bounty hunters. They live by their own moral code, and although something might be illegal, it isn't necessarily immoral. This is something I learned thanks to this anime. This movie fits into the apocalyptic thematic month not just because the main story is situated after a man made apocalypse, but because in it a second one is about to come into effect. Arguably I should be writing only about movies that take place during an apocalypse, but actually, I find that it is a lot more interesting to see what kind of worlds humanity builds up after it has to start all over again. This is a great example of how humankind doesn't have to make all of its governmental systems into dictatorships, as it happens in most post-apocalyptic tales.

Watch it? I recommend it highly, even if you don't know the series. It is a stand alone story that introduces to you the characters and you will likely be interested in the series which, some almost 20 years later still makes for a fantastic and original show. I myself wish there was more.