I remember seeing this movie in the theater with one of my dearest friends and I was really scared because I never watch movies like this, not to mention, that yes, the format of the movie got to me. But more on that later. Let's fight the monsters of: 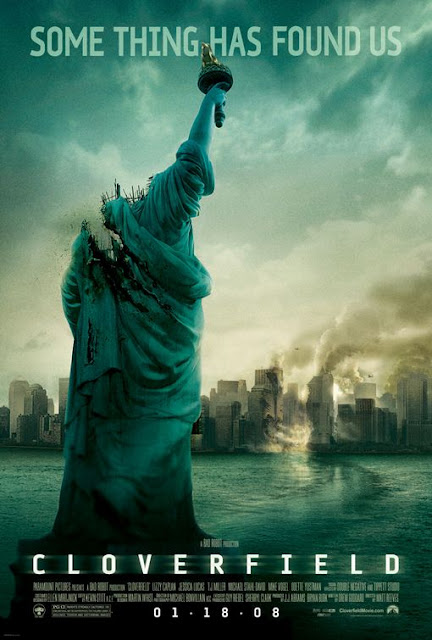 The story focuses around a group of friends trying to escape a monster attack in the New York. They have a camera with them and record as much as they can. They are first attacked above ground and people are causing chaos and havoc out of fear. So they decide to go underground, still unaware of what is causing the attacks. Slowly they fight off smaller monsters, but those who are bitten slowly die. The two main characters, Beth and Rob, escape the military as they are under attack and in Central Park encounter the monster for the first time, fearing it is the end of their life. 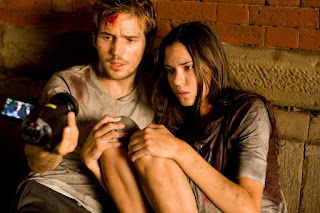 Well, yeah, I was terrified of this movie. It wasn't really horror, but the format was completely new. We see the whole movie through the lens of the camera and it worked. Some people just called it shaky, because they run and there were scenes that could not be seen properly, but to me that just added to the level of intensity. I think this movie stands alone and well, anything that copies it will be given bad criticism exactly because of the shaky cam problem. Overall I think that it was only those who did not see it in the theater could actually debate that it wasn't well done. I have tried to re-watch it and it really isn't the same thing, I agree. This movie is incredible the first time you watch it, because you don't know what is going to happen. But it does follow the typical horror movie clichés, as in, you know who will die and who is destined to survive. I wrote a mediocre essay on the monster for the above mentioned class, and the thrill of suspense, how not knowing actually makes it more interesting. Because in the end we all just want to see the monster and revealing it would have had a different effect. The movie was smart in not telling us too much too soon. It was amazing to see the end of the world, well, end, in a way, but also the movie doesn't give us a clear finish. It might not be the end of the line. The were several interpretations of the end and I believe that the debate is still open!

Watch it? Well, I don't know why you haven't yet. This one is a mixture of horror and catastrophe movies, however, it is a good mixture. It makes for an original brilliant movie that reuses some of the well known clichés but very smartly elevates them. Admittedly the format with the camera might not be as enjoyable on a computer screen or at home, but that does not mean that you should skip it!