I have written a few Disney reviews, and well, there was one that I never got around to, the main reason for it being that it was covered everywhere: Every channel, every reviewer, toy shop, radio, every f*cking place was covered in it and with it... And you'd think it is too late to write a review and you are right. So this is not a review. This is going to be an angry rant, because I just can't take it anymore... I waited patiently for it to just fade away and go back onto the Disney shelf and disappear, but it just won't... IT WON'T LET GO!!! 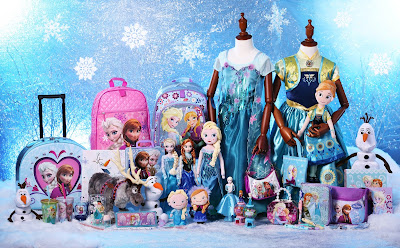 Now, these drive me insane for one simple reason: I am certain that people are buying it only because there is nothing left to buy. I dare you, put out merchandise from Zootopia, or put Moana's piglet Pua on mugs and shirts and baby shoes, and people will buy it! I know because I would buy it! I say this with certainty because I sleep with a Bolt plushie, and he is one of my favorite Disney characters! Trust me when I tell you that I do not need Elsa or Anna on my f*cking spoon!!!

I understand that Frozen was supposed to be this revolutionary Disney movie that stands out because of various reasons, but... just let us look at those reasons:

Yes, little girls should be taught that a woman can take her own destiny into her hands. So show them Mulan instead! A strong woman who takes charge of her own life despite the cultural norms that were assigned to her. That movie has great morals! Yes, in the end she chooses to be with the man she loves, but not because of customs. She does not run away from her responsibilities or because she is different. She faces the challenges head on even knowing that people might kill her for it.

And yes, sometimes the villain is simply evil. They can be driven by greed or by an inner motivation to simply cause harm. But then show children 101 Dalmations, which showcases how someone's obsession will drive to hurt innocent people. Unfortunately villains don't always have a good reason for the way they behave. And pointing out that they have a motivation is not always the best... yes, you should try to put yourself in other people's shoes to understand their issues, but there is evil out in the world that cannot be explained. I, for one, am stuck on always trying to understand 'why' even when there is no answer for it. It can become a curse... 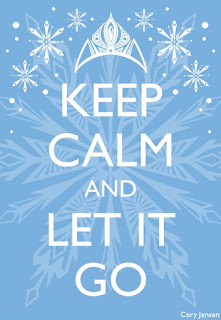 If the movie's aim was to make a new big Disney musical then hey! YOU FAILED. Let me break this down for you: Musicals are an experience because you are there live. I adore Idina Menzel (you'll always be my Maureen!) and her voice is stunning, but you can't write music that will only reach the audience through hundreds of layers when it is meant to be heard live! I have seen the Oscar performance, and let me tell you, it was not the same! Also... a musical is not built around one song... Name one more song. Come on. I dare you. And no, you can't get away with "ice song in the beginning" or "the troll song about one of the male characters". Titles please! The only reason I like to ask people if they want to build a snowman is due to internet memes... There is just something not right about "Let it Go" compared to how much people hyped it... just to show you, I kept singing songs from Moana after seeing it, while I managed to forget every and all songs from Frozen after it ended! If you want your child to listen to good Disney musicals then... well, you can pick anything that came out in the 90s! One is better than the other!

If you want to teach children about acceptance and how people are afraid of the unknown then show them Zootopia! Even if Frozen had been debated by many to serve as an metaphor for the gay community, Disney never actually said anything about it (which was smart, in my opinion), but because of that the message is lost...

And here we are years after its release and I just have to ask... what was the moral of this story? 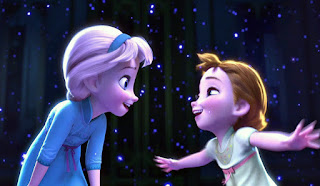 I am not joking. If it was sisterly love... sure, OK. I can take that. It is important to know that you should love your sibling, I know I love mine and I would certainly give my life for them. But the movie neglected to show any kind of healthy relationship other than the one that was driven by guilt on the part of Elsa. The movie also neglected to explain any of Elsa's powers (this is where the gay debate comes in usually, that it doesn't have to be explained. I am part of the LGBTQ and trust me, this was not done well even if they meant well!), we are simply supposed to take in that magic happens here whilst every and all Disney movies so far have given us an explanation. You do have a romance, a forced Hollywood "Ugh, I hate him/her!" that adds zero to nothing to the story and a forgettable vill--- wait. Who the f*ck was the villain? Was it the old man with the funny mustache or that Hans guy or, like, wasn't it Elsa? No, seriously, wasn't she like super rude to Anna for no reason other than having been forced in a room by their parents - that Anna had nothing to do with - and she blames her so now having an icy castle off you f*ck sister? I don't know, like honestly, I can't remember. That is how little impact this movie had on me, yet I still have to see it everywhere!

Admittedly, I liked Olaf. He was fun. His song was the best. Nonetheless, I don't want to see a snowman in the middle of Spring and Summer on any and all kitchen appliances available at my local supermarket. Stick with Christmas Mr. Snowman...

I just feel like people are forced to endure this because what the oh-so wise businessmen who never shop among the commoners see is that "Oh, they are still buying it!", and the reason for that is that we are forced as there is nothing else to buy... Baby shower? Done. Children birthday party? Done. As a joke? Done. (I'm in that category, my sister-in-law and I buy each other this shit to make the other one laugh. The more useless the better! I know, I know... I'm part of the problem...).

But seriously... enough is enough.

If you want to read my Disney reviews just click on the titles here below: