Battle Royale vs. The Hunger Games

As next week I'm starting #ApocalypticApril I wanted to start by comparing two dystopian worlds that have been a case for a debate a couple of years back. Here is my 2 cents!

Having heard people debate whether or not The Hunger Games stole its idea from Battle Royale has been driving me insane for years. After having read the trilogy I decided to read the manga since it was on my brother's shelf for years now. It was an interesting experiment and I'm glad I didn't read it before the book, nor did I start this when I was younger... 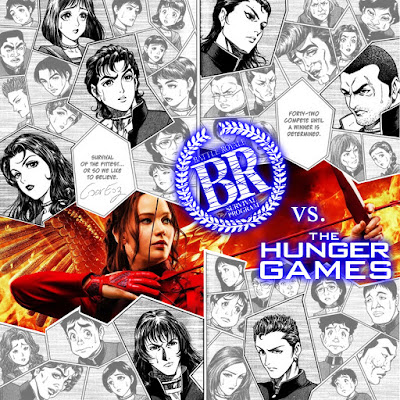 I'll have to admit right away that I have not seen the movie version because the manga was disturbing enough on its own (very, very, very, very graphic...). And to be honest I see why people keep comparing the two, however... there are significant differences and I think we should discuss them. 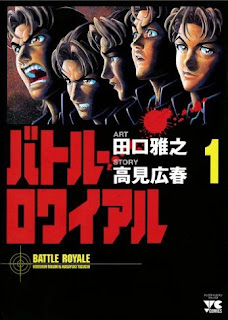 Battle Royale was a manga based on a book by the same title, written by Koushun Takamia. The manga was illustrated by Masayuki Taguchi released from 2003 to 2007, and although it follows the book, it gave the students detailed background and it was also more graphic sexually. The aim was of course for it to be more gory, so I kinda wish I had read the book instead... In the story a whole class from junior high is abducted and sent to an island to participate in the Program, where they are given weapons that are meant to be used by the army. This is basically a test facility beneath the dictatorship that rules Japan and those taking part dream of escaping from the terrible country they are in and to get to America. There can only be one winner, and even if some refuse to fight they are at the mercy of those who decided to take up arms. The story focuses on one boy, Shuya Nanahara, who keeps fighting to keep the peace among his classmates. He teams up with a girl, Noriko Nakagawa, who wishes to escape the island just as much Shuya does. Also, their team has a boy named Shogo Kawada, who was the winner of the previous Program, but ended up becoming a transfer student in the next class that was selected. Shogo decides to believe Shuya's uplifting spirit and help him and Noriko as well as himself to get off the island. The biggest problem is one boy, Kazuo Kiriyama, who lacks any and all human emotions and is kind of invincible. Which is not only creepy but completely insane... the story doesn't really specify how real this world is and that bothered me. These are teenagers... when it comes to The Hunger Games a bullet kills you the way bullets do. This kid was some kind of devil incarnation that simply made no sense to me... Spoiler, the two make it out and escape this hell, but everyone else is dead.

They do not fight in a revolution and do not stop the evil that the dictatorship causes in their country. Their's didn't become a love story or a sign of hope in times of a country that has for too long lived in terror. They are not broadcast for the world to see and the location of the program as well as the class selected are kept secret until there is one winner. Yes, kids, fighting kids, but that is pretty much where similarities end. 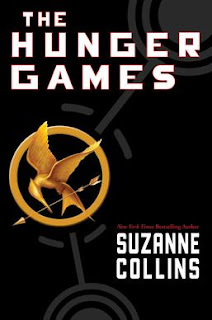 The Hunger Games, trilogy written by Suzanne Collins, came out in 2008, 2009 and 2010 consecutively. In it, you might know this already, but still, children of the 12 districts of the country of Panem are selected to participate in a reality show where they kill each other. The two main characters, Katniss and Peeta outsmart the system to be able to survive and are never, under any circumstance, okay with having taken the lives of others. They don't turn on others, don't have hidden monsters in them, and those who take place in the game willingly do it because they are taught that this is the honorable thing. The kids from district one and two are trained for this, they are proud to volunteer and take home the trophy. The Capital is too small and a revolution, a rebellion, is capable of taking it down. There is a way to escape, to wake up to a better future. Battle Royale ensures a better future for the two main characters, while The Hunger Games seeks to make sure that such a tragedy never occurs again. Yes, you'll see the similarities with children fighting, but what is the aim? The Takamia book/manga shows you a world, a terrible world, a dystopia that is like nothing else. People fight it continuously, but never get ahead because mikes and cameras stop them and remind them that a group of teenagers will never and could never stop them. And they don't... the aim of the story was never to incite a revolution. The Hunger Games, on the other hand, meant to describe what was the last drop before people can no longer stand it and are forced into a corner.

The argument that these two stories are the same to me is foolish. It is foolish because a story is different if the moral and lesson I take away from it is different. In Battle Royale I was barely relieved that the two got away because they might have slipped from the control of that sadistic dictatorship, but nothing changed. The next group of children will die the same way. Maybe that was the aim, maybe it was just one story that had to be told, about one pair of kids who managed to escape this terror. To me The Hunger Games is the ultimate story of hope. I did not fall for it for the love story (although it was a great example of how extreme cases can forge love), but because it taught me that I can get up and change my future. I think the reason I learned more from Katniss rather than any characters in the story was that the children were ultimately deranged... it might be the fact that they live in a world that is more grotesque, but even with the background of certain characters it was just not OK... I'm glad Shuya and Noriko escaped, but the story of a revolution that was not fought in vain gets my vote.

If you ever read both stories you will notice elements, small, singular things that are similar in both Katniss and Shuya, and yes, they fight to live another day. Other than the idea of children in an arena killing each other there is nothing to connect them and this debate is stupid.

Interesting stories though and I recommend them. Because remember, reading is fun! See my list of favorite ten books here if you are looking for something to read.