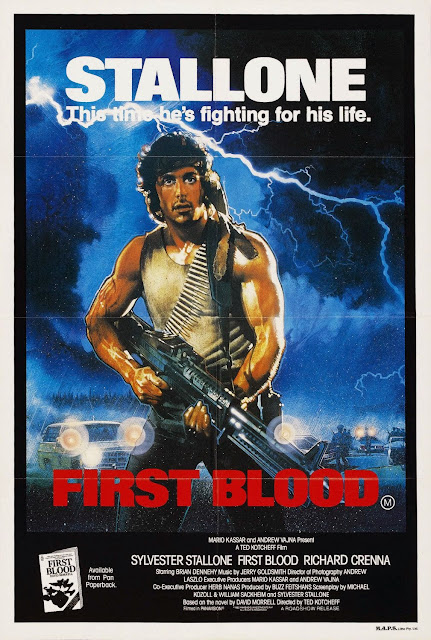 Johnny Rambo gets back from the Vietnam war and he tries to find an old friend of his, only to discover that he died of cancer. Feeling that nobody can escape death he just tries to get a meal in the nearby town, but war flashbacks distract him when the local sheriff tries to arrest him. He flees into the mountains and the police pursues him, but many are injured because Rambo works better in the field. The person who trained Rambo, Trautman, shows up to get him back as he knows that nobody will be able to stop him. In the end, Rambo tells him what caused the flashbacks and he is arrested for the damage he caused.

This movie was so stupid. It was literally the dumbest thing I have ever seen. And I tell you why that makes me sad: it had a good message but the delivery was terrible. If it just had been a dumb action movie, then I could have enjoyed it as I would not have looked for a message, or a moral to the story. The idea behind it was that those protesting the Vietnam war also protested the soldiers who were drafted, who had no choice, and who solely went in belief of protecting their own country. Admittedly barely do movies concentrate on that. Veterans are, on paper, respected but that is not always the case. The movie tried to focus on that, but it did so only in the last 10 minutes where Rambo had a monologue about how he was received when he got back into the states:


"Nothing is over! Nothing! You just don't turn it off! It wasn't my war! You asked me, I didn't ask you! And I did what I had to do to win! But somebody wouldn't let us win! And I come back to the world and I see all those maggots at the airport, protesting me, spitting. Calling me baby killer and all kinds of vile crap! Who are they to protest me, huh? Who are they? Unless they've been me and been there and know what the hell they're yelling about!" 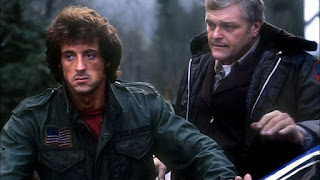 This is all well and good and actually I can't think of many movies that tackled this problem. They might do today, but almost 99% of them focus on the post-traumatic stress disorder soldiers suffer from. And that was clearly what Rambo had, and when you think about it, it is great that we can now pinpoint and see that this isn't something that can be handled by being "tough". But here comes my problem with the movie... Sheriff Teasle stops him and says that he doesn't want fellows like him in his town. Like who? People who fought for their country? And then he says that his jacket might cause a problem. It has a flag and "U.S. Army" written on it.... I'm pretty sure that in the 70s people who fought in the Second World War respected young soldiers, actually, I know that for a fact. So what was his problem?! There is absolutely no explanation to this sheriff's beef. Did he not like his hair? 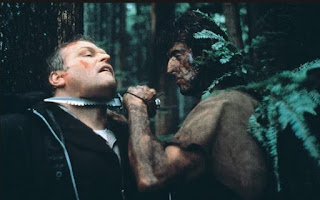 Rambo is then arrested and the old officers are total assholes with him. Why?! Why are police officers the bad guys? Why do they disrespect soldiers? And at the half of the movie they find out that he is a special operative and the man who trained him comes to get him and only then, ONLY then do some of them go "maybe this was a bad idea"... you think?! One of the young policemen keeps showing discomfort over hurting an ex soldier and that just raises so many questions in me... one, is this unusual or usual for this town? Two, if this does bother them why not report their bosses? Three, I know that the movie was supposed to end in that big monologue and although that was setup nicely, when you look at it, Rambo did not kill anyone, proving again that he is not the bad guy. Without a motivation, how can I not hate the police? Of course I want Rambo to win, because unless I zoned out there was absolutely no reason for the sheriff's behavior. This is why today bad guys have so many layers, because you have to understand why they do, what they do. Here? You didn't. You had a sheriff who seemed to care about his precious town and look what happened when he was an asshole to a total stranger! What is the lesson here?

I am sorry to be so down on this movie, but if it weren't for asshole sheriff there would be no movie. And the message of the movie is good. Veterans should not be treated like shit by people who know nothing about war. Unless you are a psychopath you can safely assume that nobody likes killing. So why hate veterans? I just don't get that. I don't get half of this movie, whatever the message. I can't wait to check out the sequels, maybe they will make more sense...