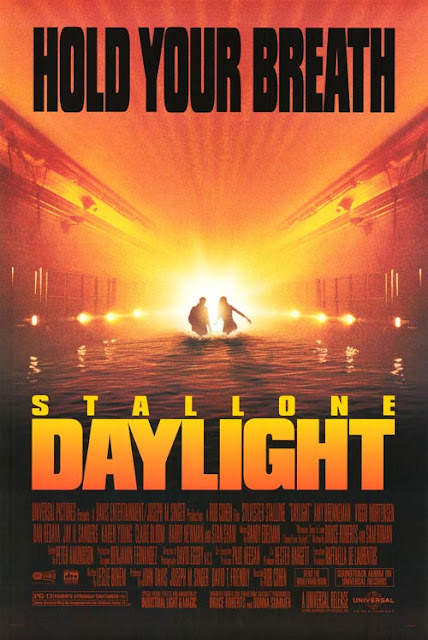 Due to an accident there is a toxic waste explosion in the tunnel leading from New York to New Jersey in the morning rush hour. Outside of the tunnel an expert of the system of the tunnels, thanks to a simulation, Kit Latura volunteers to go inside and help those who are presumed to have survived the blast. Once inside the tunnel starts to collapse and the water above them starts to flood it. They slowly advance within the tunnel and find a way out, but many die in the process, and Kit himself falls behind from the group and is left to find a way out on his own. 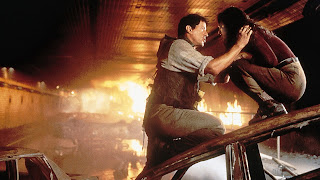 I was not prepared for the impact that this movie had on me. Let me say, first off, that I am kind of bored of action movies that have one hero that comes in and kicks down doors and saves the day. Of course, they can be a lot of fun, and sometimes they are, but I do look for a human element sometimes, and I have found that here. You see, Stallone's character was... amazing. Talk about great acting! I just love this guy so much! He arrives, trying very hard to help and he is not a superhero! He is not a MacGyver type that can make a bomb out of a paper-clip. He comes in, not knowing what to expect and you can see him scared, worried, looking for a way to help the ones around him and himself. There is one scene where he tells one of the man who broke their neck that they have to leave him behind and it was so heart wrenching. 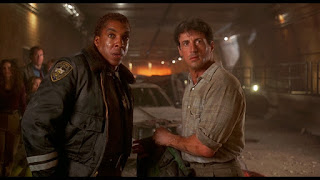 In another he found a place for them to hide and he sits there, wet, freezing to death, shaking and trying hard to stay warm. He is no longer jumping around, making sure everyone is OK, assuring them that everything will be fine! Because it might not be. He might die here with them, but he made a choice to do the best he can, unfortunately that does not mean that he himself won't get scared in the process. I was in awe watching this movie, it was so 90s, with the music already letting you know when shit is about to hit the fan, and you know already that the black guy is going to die, also the elderly are in danger... but the dog survived and that alone made me so happy that I cannot tell you.

Watch it? Yes. To be honest I have seen that on imdb realistic action movies get a terrible rating... I don't get that. I sure understand that action movies that have a more fantastic world and unreal physics can be a lot of fun, but many times these get comments like "that could never happen!", so why not like the one that does it right? It's just a typical situation of not being able to give people what they want... as they themselves don't know what they want! That said, it is a great movie and I do recommend it whole heartedly! Especially if you are looking for a good Stallone movie!