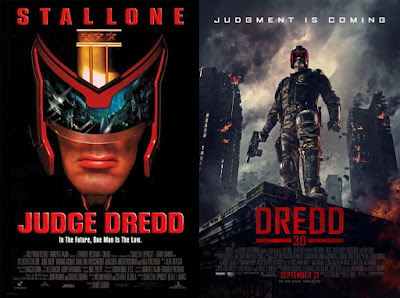 This movie is based on a comic series by the same name. The first movie came out in 1995. In the story Judge Dredd was setup and arrested for killing someone. The evidence against him was based on DNA, but we find out that he was an experiment along with a Judge called Rico, and that makes them brothers. Dredd returns to stop Rico because the latter wishes to create more humans like them to do his bidding as judges. Dredd on the other hand believes that the law should be upheld and no one has the right to go against it, especially not for their own purposes. Their world is damaged enough and they should work to set it right. 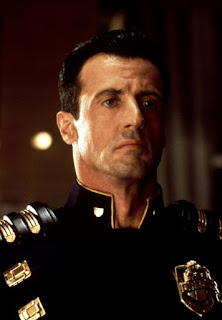 I didn't know anything about this movie or the world it is set in. I do want to read Dredd comics now and I will get to them soon. The idea of a world that is no longer in control and only a few are willing to work for justice is scary. This post-apocalyptic world is also attractive for the way people decided to set up laws and rules in a very democratic way. In the end even Dredd was just trying to upkeep that law, even if that turned against him. There were two things in the movie that I did not enjoy very much and thus it is unlikely that I will rewatch it anytime soon... First, after Dredd got arrested he was being transported to jail and his transport was stopped by a group of cannibals. One of them is just unreasonably disgusting and I'm sure they are meant to be scary but they are just gross... maybe that was the intent but seriously I don't know what they wanted with them besides showing that Dredd can survive anything. The other problem was the villain... Rico, played by Armand Assante. And well, he played Armand Assante. I'll admit it I haven't seen many of his movies, yet I feel like I have seen this character more than once. It was ridiculous. Again, was that the intent? Was I supposed to be scared or be amused by him? I don't know. It was very hard to take it seriously and I think that was the biggest problem. There were a lot of emotional scenes and the action was entertaining but it was hard to get invested and to care when I am either disgusted by the side characters or laughing at the main villain... 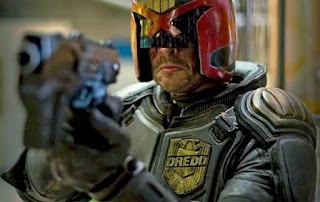 In 2012 there was a sequel made with Karl Urban playing Dredd; and in he was just assigned a case in which he worked to take down a drug den. I'm fairly certain that it was closer to the comic, as I am sure that even if his origins and backgrounds were discussed, they are ultimately not what the comic books were about. If I had to compare the two, and I do, I would say that the first is a good base for the continuation and the sequel went with that. There was no need for a new origin story, who cares? Dredd kicks ass and people want to see him kick ass. In the first film he was merciless, in this one he thinks twice about his decisions. You can see that it isn't the same Dredd, but neither was the first one at the end of his own movie. You can either take this as a continuation, or not. It doesn't matter. What matters is that you expect Dredd to be in a certain way and he is. 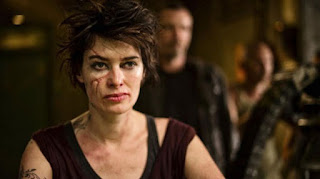 Not to mention that the villain in this movie was outstanding. She was played by Lena Headey and she was the head of a drug ring that even payed the judges off. This world they live in is where money wins, even for the police, as the city is dying, going under that chaos and people are giving up. But not Dredd. He finishes the job and that's what the movie is about essentially. In it he is training a rookie, Anderson, played by Olivia Thirlby, who is able to see people's thoughts, and she is meant to become a Judge but her skills have to be improved and that is why she is assigned to Dredd. There is no romance and the girl decides that this isn't meant for her. This movie is about action and on that it delivers a lot better than the first one. Acting is brilliant, but the story is very different and because of that it is hard to compare the two. This movie is a continuation in a way but it stands alone perfectly and it is a great movie if you ask me.

Watch them? Yes, I recommend seeing the first one too because it is interesting. When it comes Sylvester Stallone movies I'm not gonna recommend it, but not because of him, but because it is silly. It has a good moral and several layers and it introduces you to a world that makes you think about the future. But it's simply dumb... The second one, on the other hand, is a great movie with great affects and an outstanding cast. If not both, watch the second one (but careful, it is a bit graphic...).

This is the end of #StalloneMonth 2017. I hope you enjoyed it and I'm already collecting movies for next year's installment! Make sure you stick around until then :) Thank you for reading!

Until the next item on my list!
Bejegyezte: CsorEsz91 dátum: 8:27 AM