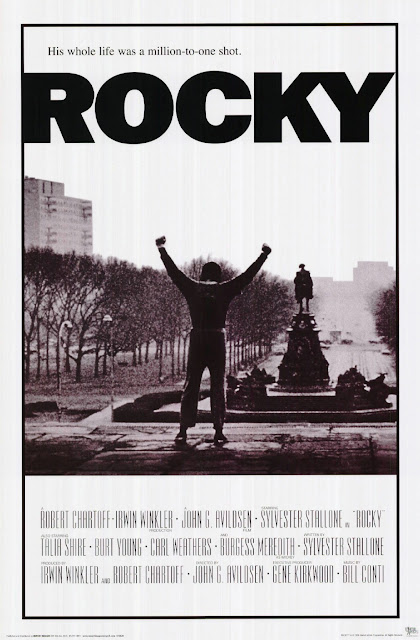 Rocky Balboa was a fighter, but he never made the big leagues, but he now has the chance to get his name known. The world champion, Apollo Creed, decides to fight a nobody to give people a show as real fighters keep pulling out of the fight. Rocky trains like crazy, but he knows he is not good enough to win, he does, however, wish to go the distance. The two fight through all of the 15 rounds, in the end Creed wins, but Rocky didn't lose as far as he is concerned. 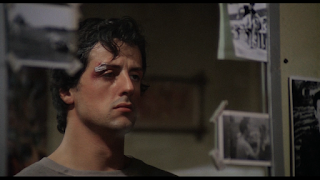 It took me three hundred years to watch this movie. I just put it off. I'm not sure why, and well, I have encountered a lot of parodies, so I knew the story very well to begin with. The movie was a bit slow, to my taste, but not boring. That's important, because a lot of times I feel like I'm just watching and watching and watching and nothing happens really. And well, movies that are nominated nowadays for an Oscar never sit well with me. They are too artsy and they all have a thousand deeper meanings that they want people to explore and well... I just don't care. I'm sorry, but sometimes I just want the movie to give me the answers. 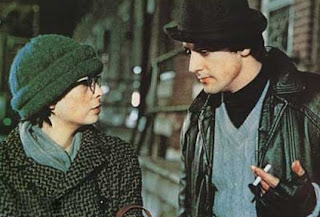 Here you have an underdog, someone who got it bad, simply because we can't control where we come from, but he sure does everything he can to change where he is going. He cares for a shy girl, he works to put food on the table and he fights. He was told all his life that he needs to be an athlete, because he is not the sharpest tool in the shed and he did make the best of that. He is also a realist. He sees what happens around him and he takes notice, from the people at the gym, to everyone in his neighborhood. And I really liked that he was aware of his capabilities and he didn't go to the fight like "I'm gonna be the next champ!". 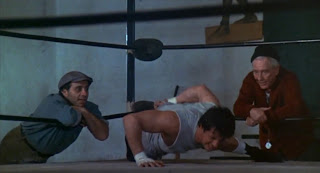 Every movie of this kind reflects that the main character is sure of himself, otherwise they won't win. Rocky weighs his options and makes the best of it. He is actually a lot smarter than people gave him credit for and I think that is a very smart twist. And I especially loved Adrian, his girlfriend's outburst. There is a scene where she confronts her brother Paulie, pointing out that because he treated her as if she was a weirdo she grew to believe it over the years. Having someone like Rocky who could only see the beauty in her made her open up. That is something beautiful in my mind. The only thing that drove me insane about the movie is that nobody washed his work-out clothes... not even after the girl moved in with him! I mean that huge stain on his behind was simply disgusting!

Watch it? Yes, I recommend it. It still holds up as a good movie after all these years and there are little gems in it. Sure, you can critique Rocky's fighting style in the end, I know I did, and there a few WTFs here and there (like why was that dude watching TV in the office with his shirt open when people around him where working?), but overall I think it's an innocent movie with a great morale.