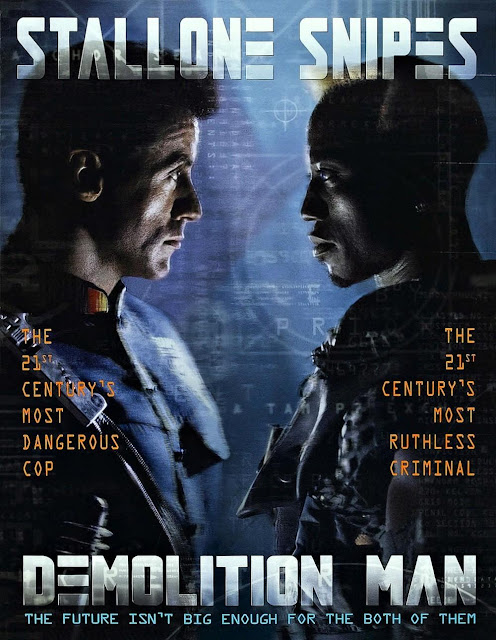 Officer John Spartan is on a man hunt, to get a criminal - a bomber-man - Simon Phoenix in custody. His hunt makes him break the law as well, and it results in negligence and the death of several hundred people. Once apprehended Phoenix is frozen and due to his actions, Spartan is frozen as well as part of their rehabilitation program. Once awaken for parole, several years later, Phoenix escapes and wreaks havoc onto the peaceful planet that has come to be since their arrest. Spartan is then awoken as well, as he is the only one who can stop him. The world is a peaceful place and the police is not equipped to handle a mass murderer, nor do they actually train officers to handle violence. It is up to Spartan again to put Phoenix behind bars. 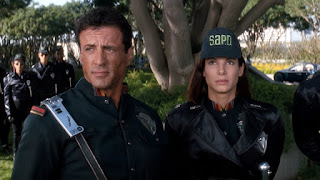 This movie is incredibly stupid, but in a good way. By that I mean that the idea behind it is very smart. It shows that what seems perfect on the surface, might just be rotten on the inside. In the movie there is a whole scene directed to showcase homeless people living in the sewers. It perfectly shows that sometimes we don't solve problems, we just push them aside. And that is essentially what the movie is about: freezing someone will not rehabilitate them as although they are literally prisoners, they are not actually in prison. Time stops for them, life stops for them. The bad guy never learned his lesson and people had to pay the prize for that. So as far as the message of the movie is concerned, I think it is brilliant and quite ahead of its time, as it doesn't want to shove a moral down your throat but it leaves you thinking. 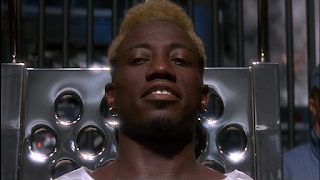 So why is it a stupid movie? Well, because it also tries to emphasize a lot of things that it shouldn't. The police force are portrayed as complete idiots... just because you live in a peaceful world that doesn't mean you should hire dumb people or that you don't need schooling anymore. Second point is that the villain is really just insane and the whole idea of him being freed while the cop who got him isn't - simply due to negligence -, is a big question mark over the movie. Last, but not least... the future stinks. It tries to give you a variation of many futuristic movies you have seen but it lacks logic. You won't give up meat and sex, America, you are not fooling anyone.

Is it a good movie? It has a good message and the action scenes are really fun. It has an overall good cast, but it is clumsy here and there and unfortunately many believe that the good doesn't make up for the bad parts. Is it still enjoyable? Yes, very much, as it is a good 90's movie. And if you are a Stallone fan you should see it, just to be able to appreciate Wesley Snipes' presence in The Expendables (click here to read my review!).