Here's another movie that got a lot of criticism for being... a musical. People should really start coming up with reasonable arguments because sometimes they are just simply ridiculous! 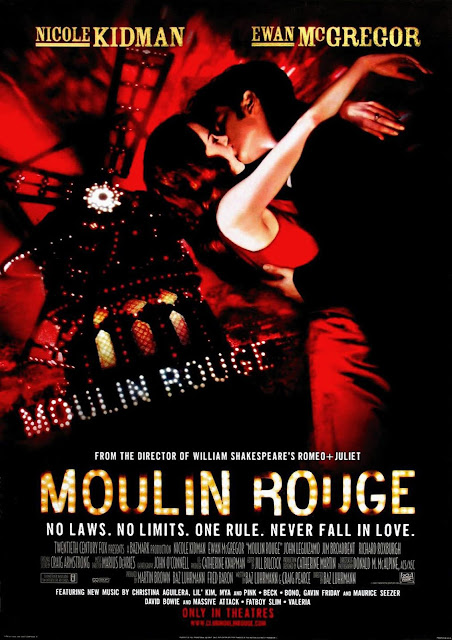 A young writer, Christian, finds himself in love with a prostitute, Satine, working at the Moulin Rouge. He, and a group of artists, come up with the idea of a play, so that he can spend as much time as possible with her, while getting funding from a young Duke who is also in love with Satine. The duke not only finds out about their union behind his back, but even if he were to do something about it, it is too late as Satine was sick to begin with. Christian loses her, but only after having made her dream come true. 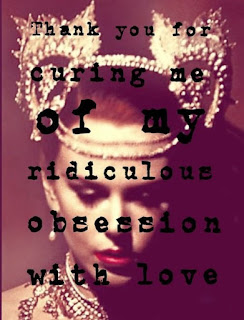 Funny thing about this movie is that people either love it or hate it. I am neither. I liked the movie to begin with and I saw so many negative reviews that I started to think it over and came to a simple conclusion: it is neither good nor bad. It has ridiculous moments, true, but it has beautiful ones as well. In some cases the director simply hit it out of the park (you are reading this and you know exactly which scene I am referring to!), and in others it fell flat. Why? Mostly because it wanted to compensate the sadness with something entertaining, but it didn't come up with actual jokes, just long sequences that many times made me feel embarassed: something I do not like to feel at all. This was most of the time set off by the Duke's character, who himself was a weird person, so it is only natural that he would have that effect on the viewer, but because of that a lot of precious moments in the film got lost in translation for me. However, this is to me will never be entertaining. Someone who has anxieties and is generally an awkward person will never come off to me as a comic relief character, thus his presence as a sort of balance between the seriousness of the movie and the ridiculousness of it didn't come across a lot of times. Unfortunately, the other comic relief characters too became much more serious after one faithful song and the awkwardness level just grew and grew. If I had to criticize the movie I would say that the Duke's character was the biggest flaw for me. 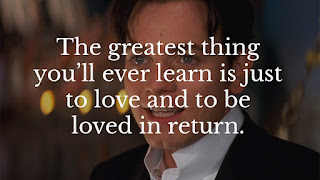 But do you know what the fun part is? Here I am, trying to analyze correctly and from a neutral point of view the movie, but it is all in vain. Moulin Rouge was one of the first musical movies of the wave that started in the 2000s and up to today the biggest criticism it actually got was that "It didn't have original songs"... this is the one thing that still up to today drives me insane, and I have written about this several times, with my review about Glee (click here to read), which was adored by everyone despite seemingly having the same fault, not to mention that everything in American television that shows creativity musical-wise gets axed in a heart-beat... So what if these are old songs? They sound great. The lyrics get knew meanings, they tell new stories, they are given life again. Think of Roxanne by The Police... that song gave you a whole new universe to explore, not just a 3 minute 80's tune about a man in love with a prostitute. This scene... oh yeah, this is everything! Watch it if you don't know it! This song makes me want to sing and cry at the same time while I have goosebumps all over... truly fantastic!


There was a lot of work put into this story and for that I applaud it and appreciate it very much. Is it the best love story ever told? Definitely not, as it has been told already many times before. Does that mean the movie is bad? No. Not at all. The reason that does make this a good movie in the end is that the story can stand alone without the music. Many musical movies that come from an original idea instead of Broadway sometimes fall short because their intent is to have a song after a song, but the story is not really, well... existent. Here on the other hand you have a concise story from beginning to end and I think the songs only make it better. Watch it? Sure, it's actually quite good.