To be honest, before I fell in love with Sylvester Stallone, there is one other person who was very close to my heart because of a character he played in Oscar (1991), one who gave Mr Provolone his elocution lessons, one Dr Poole played by Tim Curry. 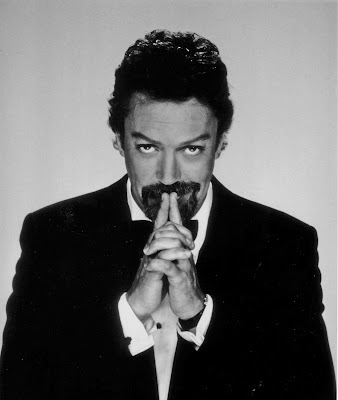 This man has played every single role available out there. From transvestite, to villain, to side-character, to headmaster, to pirate and receptionist. And I could go on and on. For a very long time I wondered based on what he chooses the characters he plays and I come to realize that perhaps he is one of those people who truly are happy to play any and all roles. He sure had high and lows, but there has not been a single movie where I wasn't happy to see him! 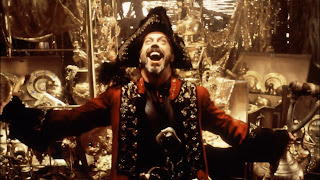 After the first movie where I fell for him, his next role that I came across was in Muppets Treasure Island, where he played Long John Silver. To be honest, I haven't seen his movies in a linear fashion, some would say, as the last movie I came across might actually be the one he is most well known for. However, before we get there, this one was a childhood favorite of mine too. I just didn't care he was the bad guy, I rooted for him! Yes, he deserved that gold, yes, he should be the captain! It might just be that coax that he already had, the one that got Jim to like him so much from the beginning. He had a charm that simply hugged me while watching it! 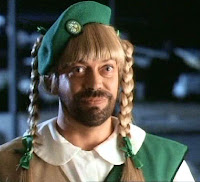 Then came the funniest movie I have grown up with, Loaded Weapon, where he played the right hand of William Shatner, Mr. Jigsaw. In my favorite scene he is dressed up as a girl scout who tries to sell cookies to Whoopi Goldberg. She jumps around and then steps on a cigarette butt, and that beard... it's perfect! I adore that movie and my sister and I recall that scene on a daily base!
Next movie he was a sassy concierge, in Home Alone 2, and then came the Charlie's Angels movie, which is up to today a big-big favorite of mine. And then I saw him as the most evil man in all of France, Cardinal Richelieu in The Three Musketeers. 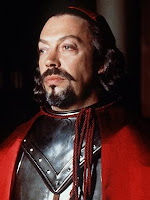 I loved him in that role, as he really was a bad guy and when you watch the movie you can't help, but hate him. But it's a good kind of hate! Mostly, because you know he won't win in the end anyway, but it's fine because he truly is a horrible human being.
A couple of smaller roles followed and not so long ago I was introduced to one of the silliest roles he has ever played in his life, at least in my opinion... it was the headmaster of a witch school in The Worst Witch - which seems to have a far better rating than I thought it would. In this scene he is singing a song that has rhymes which were probably written by a seven year old, and the Nostalgia Critic and Nostalgia Chick made fun of it a couple of years ago. (For the review click here!) And I advise you to check out the song if you don't know it yet, because it is truly fantastic! Click here to see it! He also did a lot, and I mean A LOT of voice acting! Among my favorites is G. Gordon Godfrey in the series Young Justice, also Pretorious in The Mask, and the Cat King in The Cat Returns, finally a smaller but a favorite, a Hot Dog in the Regular show, just to mention a few.

I decided to leave the best - some would say - for last because it is one of the last things I saw. I was told I was too little to see it for a while, and to be honest I think I still was when I did see it. This movie is really deep and a lot of ground is covered, disguised in a musical about aliens. 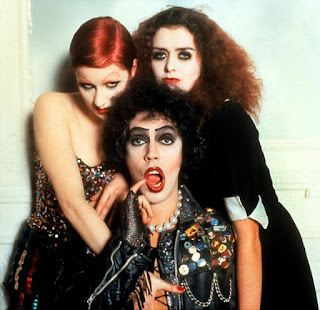 You guessed it, I am of course talking about The Rocky Horror Picture Show. I just love musicals, and some of these songs have become a favorite of mine in a very short time. The way Curry plays this role? It's fantastic. Truly! Most little girls dream of becoming super models - not me! If I have to put on tights and a corset, then I want to look like Tim Curry! The movie is now 40 years old, which is really something and I am quite proud to say that I have seen it. It is a Halloween classic for me when it comes to the songs. I have been planning to re-watch it for a quite sometime now, because I think I have grown up since then, so maybe I'll be able to take in more. Still, when I hear Curry sing I just melt and because of that this movie quickly became a favorite of mine! I really do want to see it in the theater at least once in my life.

Curry has disappeared a bit from the public scene, I have heard that he is sick, which I am very sad about, but I have all of these awesome movies to keep me company and I am always happy to recognize his voice in various cartoons! He might not have roles that deserve an Academy Award, but if you ask me, you can grow tired of those movies pretty quickly! Making people laugh or sing along with you is a much-much harder job. And if I'm concerned he always succeeds, that is why he is a favorite of mine. Tim Curry truly was my first crush, and yeah, he stayed as such even as a transvestite! (Have you seen him? He's smoking hot!)

Thank you for all your hard work Mr Curry, with love, CsorEsz


Next up will be the Halloween Special for this year, and also the first of a series of musical movie reviews, starting with The Rocky Horror Picture Show! Stay tuned!