I have previously talked about this movie on my list of my Top 10 Best Movies From The 90's. And since Renée Zellweger made the news (again) I remembered how different she was when she was young (yes, I'm just gonna pretend she is getting old!). And she wasn't the only one! The whole cast grew up since this movie was made! For me it is a classic and it's gonna be twenty next year, so therefore I wanted to talk about it a little bit! 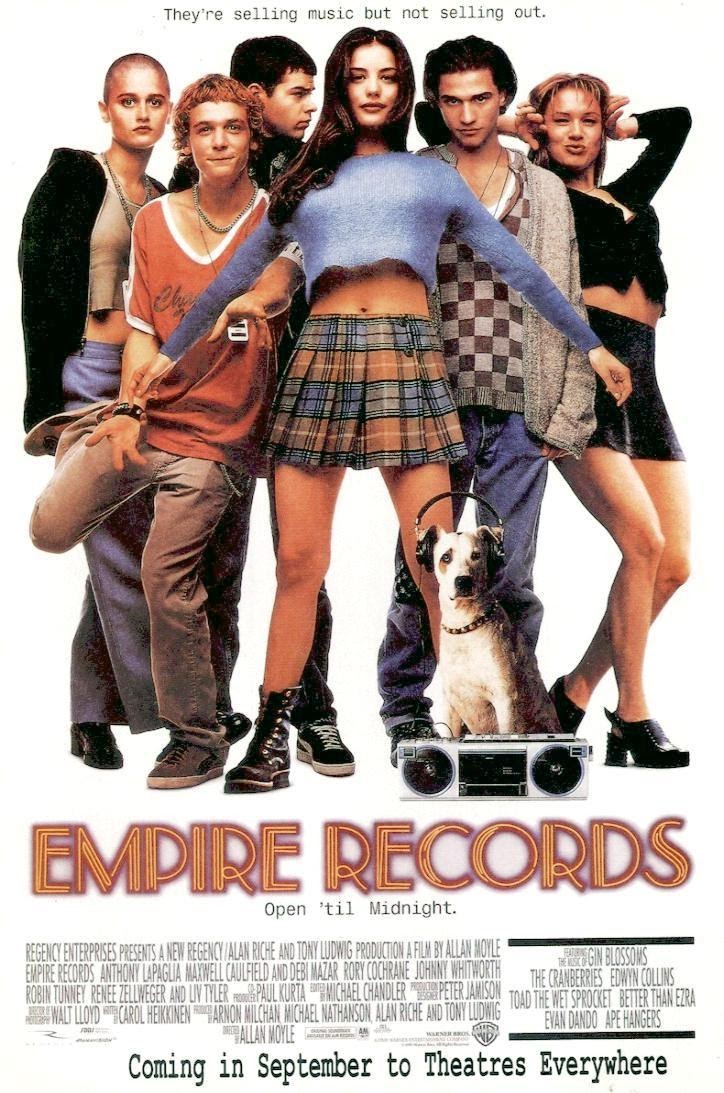 We follow the adventures of the staff of Empire Records for a whole day. All young kids with a 30 some-year-old boss. The record store is going to close down, as it is more expensive to keep it open, not to mention that one of the staff members had gambled away most of their savings the night before... In order to keep the shop open, they throw a big fundraiser concert at the end of the day, to which surprisingly a lot of people show up - as this place is a safe haven for a lot of people, not just its employees - and they do manage to save the store.

What is great about the movie? Easy. There are really 10 characters and although the movie shows us no more than 1 full day in their lives, you still feel like you know these people: you are a part of the team; you  have their same fears and share their joys; and that you too have to save the record store! And it is such a great feeling when they do save it! And that's the other thing, 90 minutes are literally nothing! Just think about how much stuff you can cram into 90 minutes! And you have movies that do only show you an hour of one's life and you have those that cover periods longer than a year. Here, it is no more than a day and the night that precedes its events.

Inside the store you get a variety of youngsters. Some of them are seeking something more from life. Others, on the other hand, are perfectly happy with the life they have. This is a continuous contrast: What makes one really happy? Seeking out happiness or living for the moment? Who is right? And at the end of the day, there is no right answer. What you have to do is what makes you happy and it is that simple. And the record store is a safe place for all of them. I love the music, the plot, the stupid saturated colors of the 90's that light up the movie. It's all one big party.

My favorite character is Debra. I want to talk about her a bit more in detail. She has tried to commit suicide and she goes to work, shaves her head and asks the others to have a funeral in her honor. She believes that there is no point to life, that it doesn't matter what you do, it won't get any better. During that one day she realizes: "So I guess nobody has it really all together". And she concludes that it could be a phase, or not, but no matter how dumb the blonde girl is, and how silly the guys can get: They are her friends. They are there for her. And if she has to rock out the rest of her life, she is gonna do it in style!

This is such a great movie, and I think it is very underrated, despite the all star cast that these actors turned out to be! Simple, but touching stories, that are bound to get to any youngster who is questioning what they should be doing in life - or whether or not what they doing is the right thing. It could be, maybe it isn't, but the key is surrounding yourself with the right people and then everything will be alright! Do watch this movie!