Guess what? I knew I didn't want to see this movie. 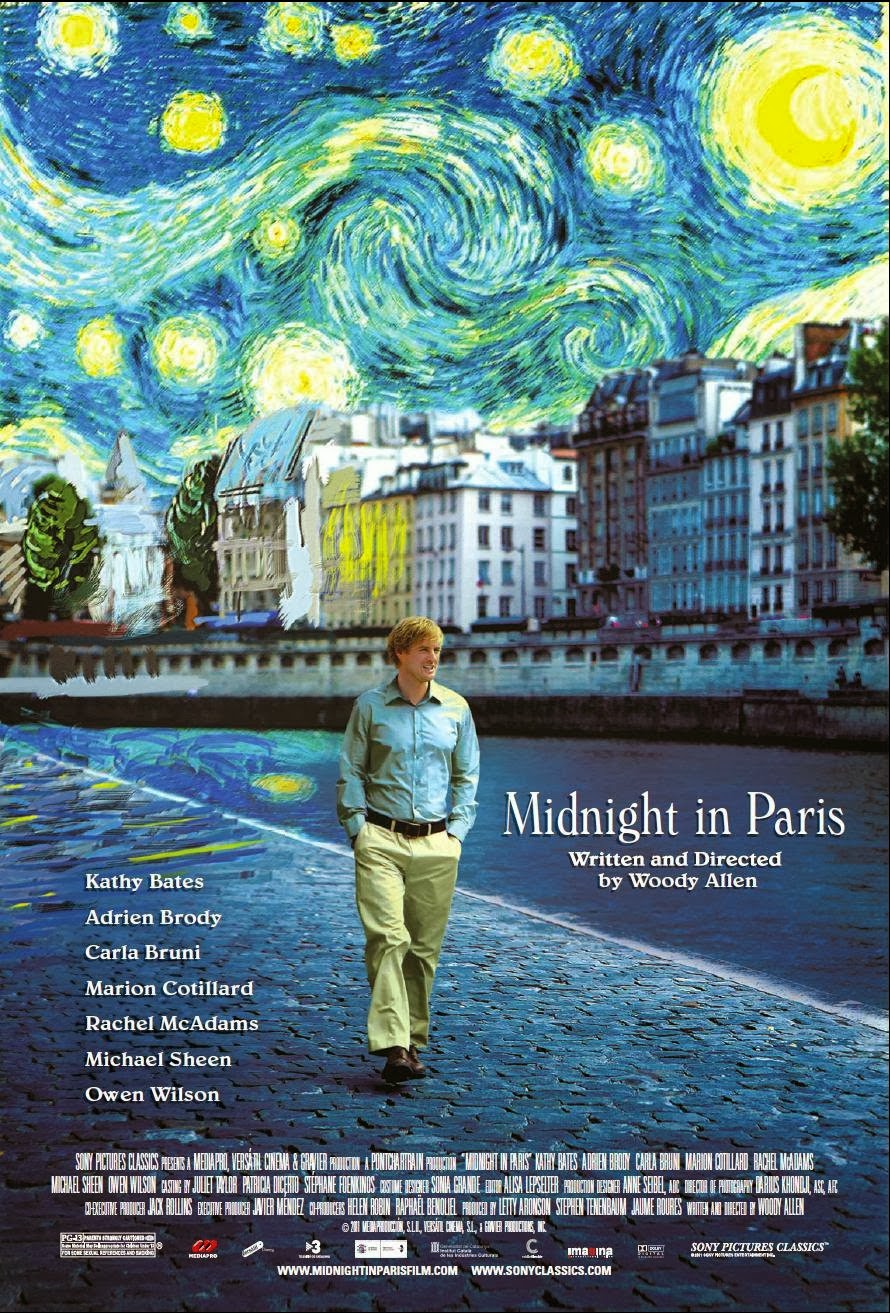 Gil Pender is a screenwriter trying to break out from that world and write the next great American novel. 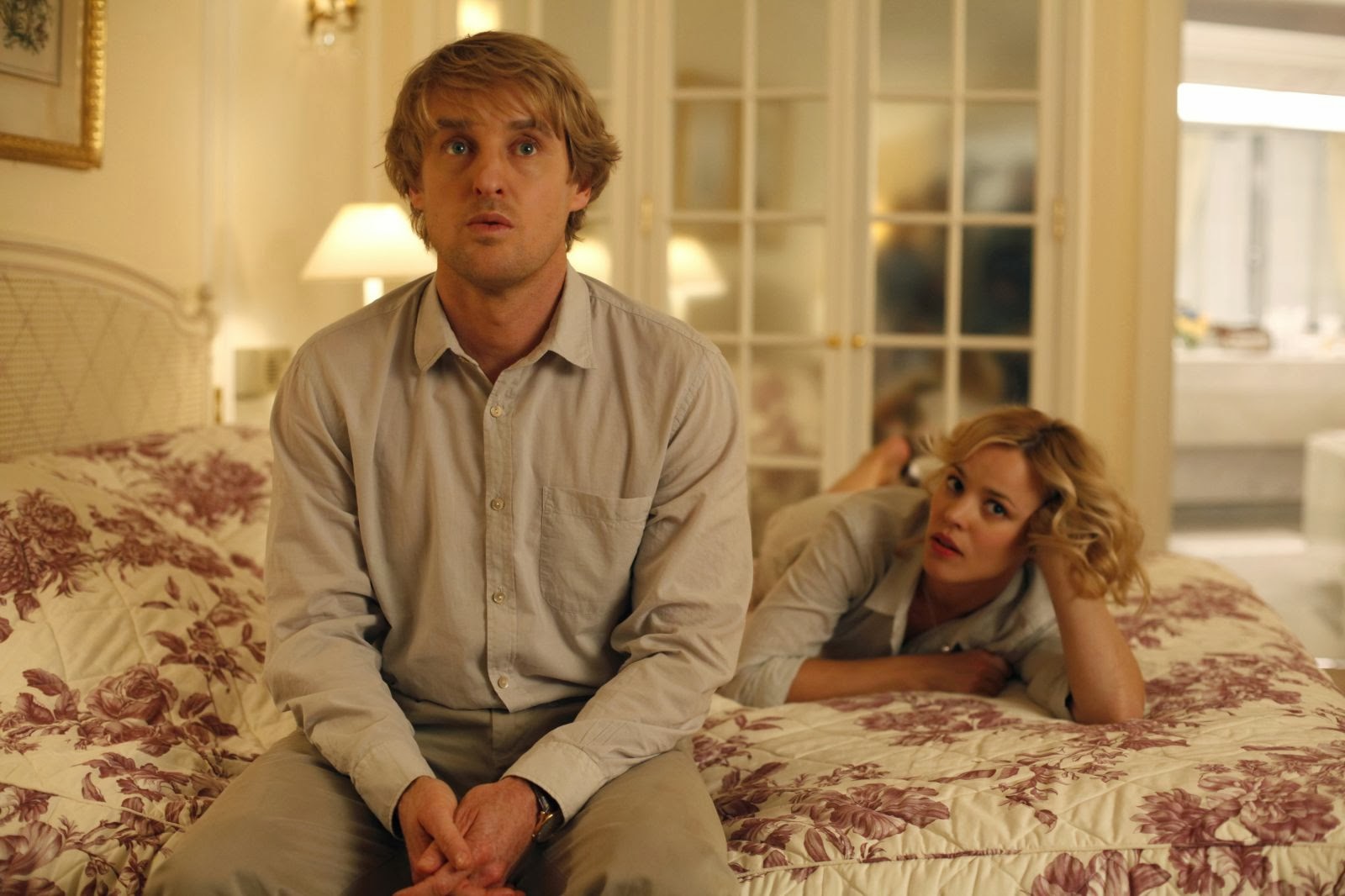 He is currently on a trip to Paris with his fiancee and her family, when he realizes that he can time travel back to the Golden Age where he meets his biggest role models: Hemingway, the Fitzgeralds, Gertrude Stein and even Picasso and Dalí! He asks for help from Stein on his novel, only to realize that while he was living in this fantasy, he missed out on real life. His fiancee is cheating on him and his whole life is turned upside down when he finally comprehends that everyone has a completely different idea of what the Golden Age is or was, and even if he doesn't feel like he lives in one now, this period might be it for someone in the future. He leaves his fiancee and his notion of what the world should be like behind him. 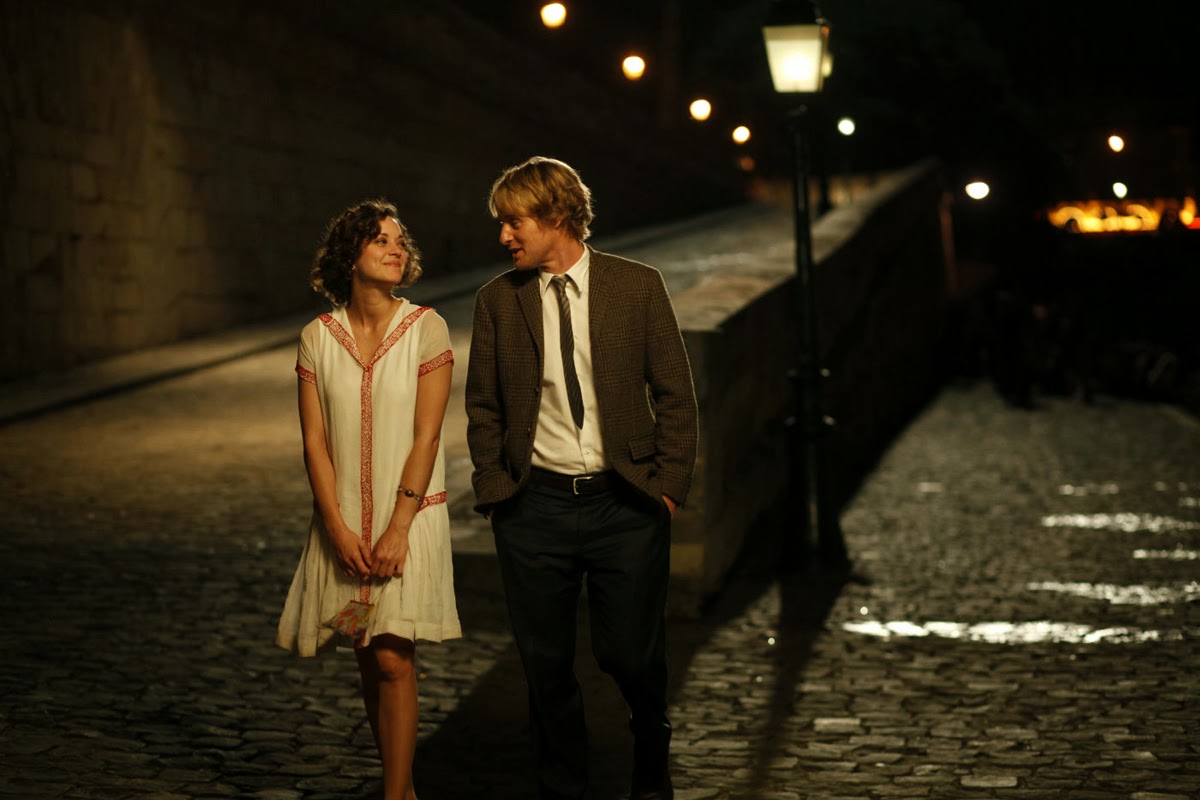 There were overall three things that completely ruined the whole movie for me. Let's start with number one: Owen Wilson's Gil Pender. Oh, let me rephrase that, Owen Wilson's Woody Allen! You know that Woody Allen has invented this quirky a bit goofy, but nonetheless very intelligent character that just doesn't seem to fit in with everyday people. And for most of his movies, that is exactly what made them great! He was hilarious by making fun of everyone around him and becoming, strangely, the one you could associate with! But the character was his nonetheless. Now, I am not saying that Wilson's interpretation wasn't good - I'm simply saying that it had completely and utterly lost that quality of uniqueness that the original had. Just think of Take The Money And Run (1969), or Manhattan (1979), not to mention Annie Hall (1977) and my personal favorite of all time Bananas (1971). They were great, weren't they? 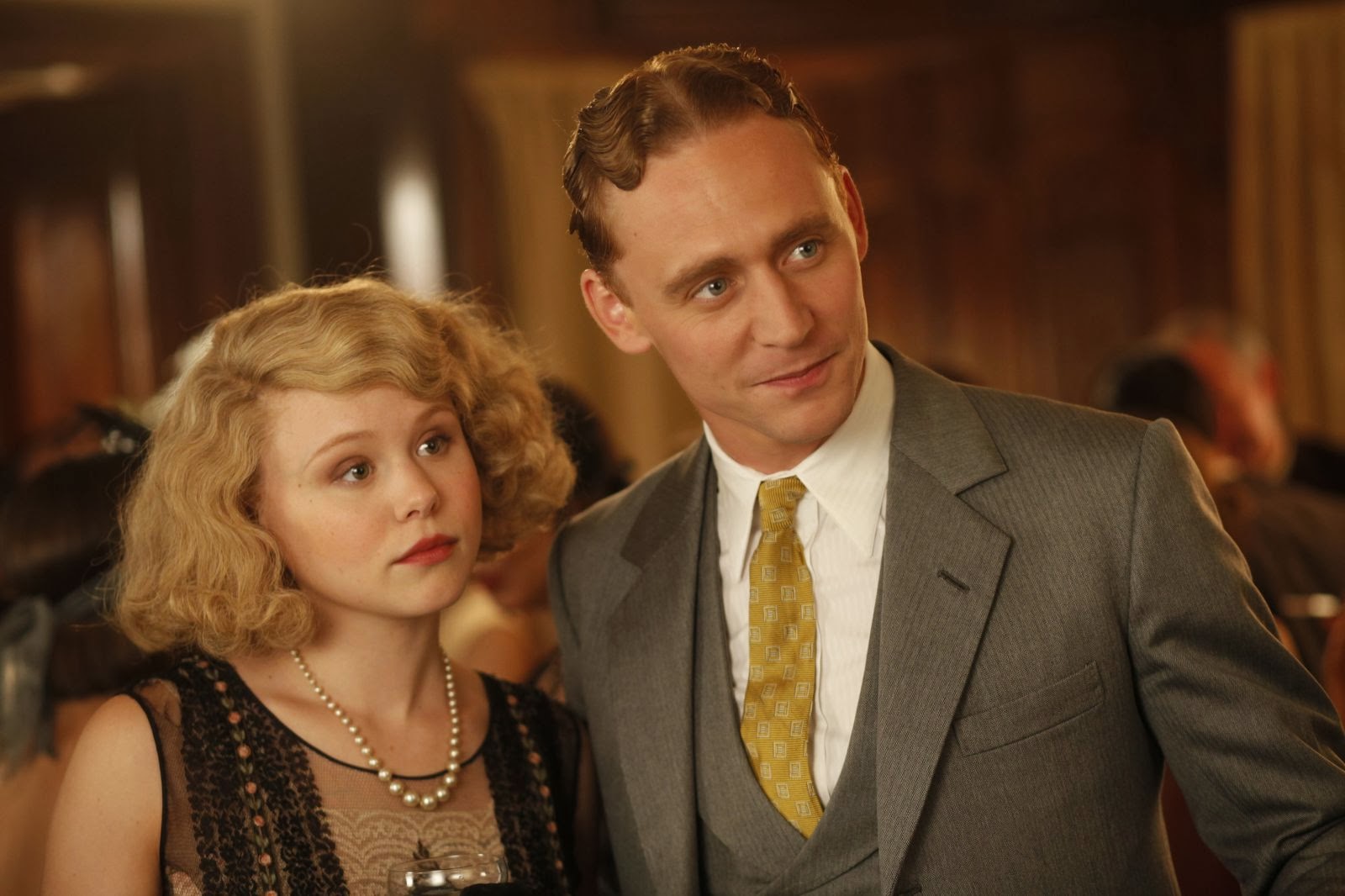 Then he moved away, made Match Point (2005) which is my favorite from him and everything went downhill from there. I won't waste your time with describing how I want to burn every single copy of You Will Meet A Tall Dark Stranger (2010) available on this planet; but now you can get and idea of why I wasn't too interested in this movie. Lately each of his works have to feature some beautiful European landscape and at least a pretty blonde who is simply good to look at. Not to mention that it tries to teach some very deep lesson that isn't forced onto you, no, you need to interpret it on your own! ... 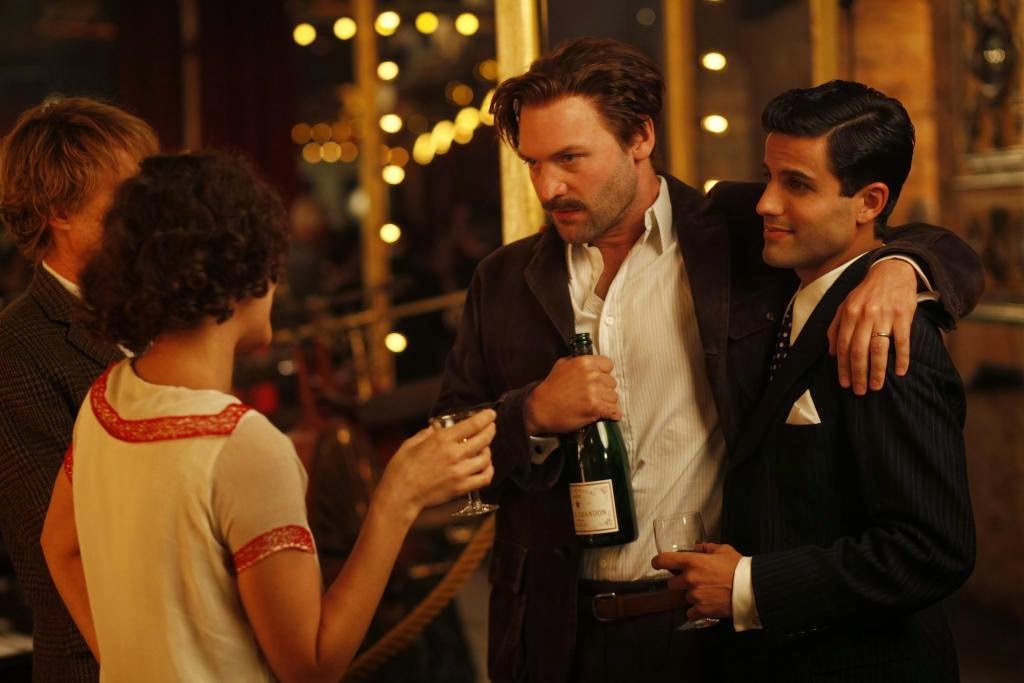 I will say that I love Paris and I eternally loved the concept of the story and the music and the scenes: There really was something magical about it, no doubt! But the execution? It was painful to watch nonetheless because here, the main character isn't someone who just doesn't know how to fit in, while having those sweet qualities that make us like him, here he is just a douchebag who won't let go of an ideal Paris and who refuses to live in the present. He is not likable at all.
And here comes my second problem, his fiancee Inez. I get that here we find out that they are not compatible, but this still begs the question: What is it that brought them together in the first place? She seems to love him at first, yes. Was it the money? 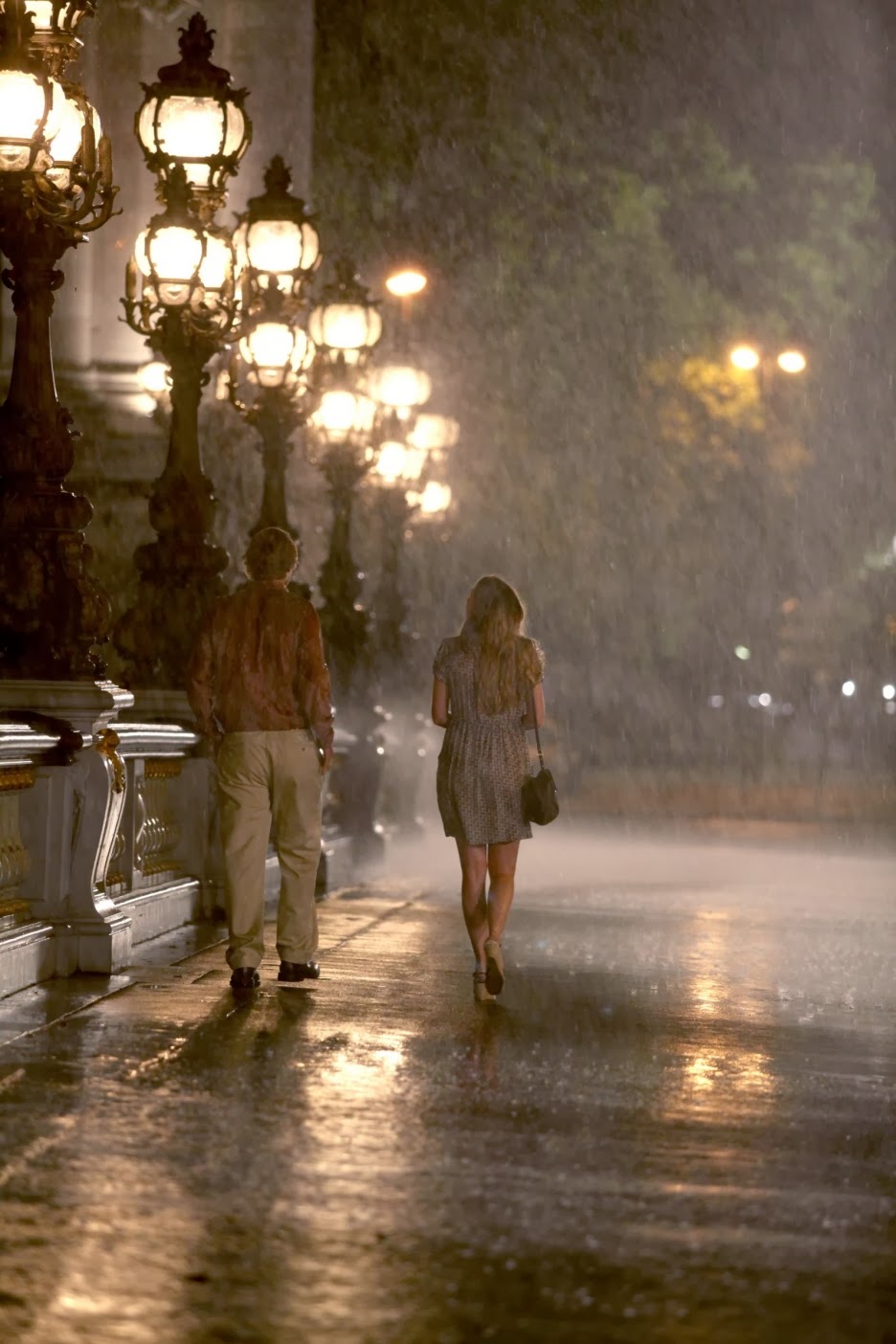 They do talk about him being a screenwriter in Hollywood, perhaps a stable job is one feature. It couldn't be his brain, because she keeps talking about how he can only learn from their professor friend, so she must be attracted to knowledge, and this is a circle, as we come back to why Gil? Is a rebellion because her parents clearly dislike him? Could be, if in case she had a bad relationship with them, but she doesn't! As a matter of fact, she has the healthiest relationship a character has had on screen with their parents since I don't know when! I know that the aim was to enhance their differences, but I was not in the least interested on what divided them, because I didn't believe their union from the beginning. And the same with Adriana, the girl she meets in the past. She might be attracted to the tortured artist type, but otherwise I did not get the chemistry between the two at all. There is little to nothing likable about this guy!
Finally, my last problem: The ending. Not OK. Random Parisian girl won't go out with weird American who couldn't put three sentences together the first two times they saw each other! That just doesn't make sense! And I liked the idea of them ending up together, don't get me wrong, but "Oh, you too like the rain? It is meant to be! THE END." ... That is just not OK! I am all for the magic of Paris and how it is the city of love and that there can be a spark among people especially when they don't see it coming. But there wasn't any spark and it was just awkward. It wasn't properly set up for me, is what I am trying to say. 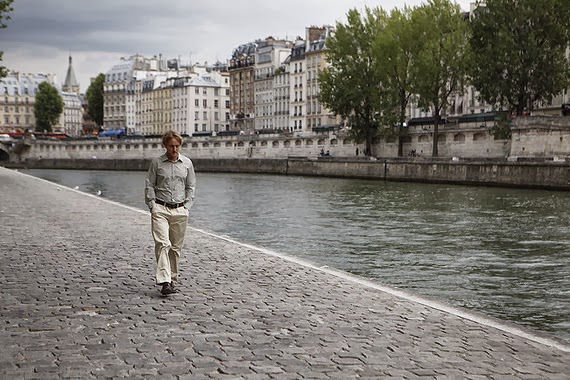 Really, all the small elements alone were outstanding, the movie for me had problems because these small elements many times didn't fit together. Let alone the fact that I don't like Owen Wilson, and that there wasn't nearly enough Rachel McAdams! Her character? Hated it, but this only means that she did a great job at selling it and I actually enjoyed hating her! Overall, the whole simply didn't come together for me. And I am sorry, because I did like the idea of it very much. And perhaps it was the time, only 10 minutes more to conclude properly or to give reason to a couple of things and I would have no complaints!

See it, don't see it? I don't know, I'm not gonna say it was a waste of time, but it made me more enraged than I thought and that made it very hard to finish. If you like recent Woody Allen films, then don't worry, you'll enjoy it very much. On the other hand, if you have problems with anyone from the cast, then you will be haunted by it throughout the whole 90 minutes.