I am currently crossing out movies from Jennifer Lawrence's filmography and this has been on my list for quite sometime. I have been told that it is a very deep movie and I shouldn't take it lightly. Before we head in, all I can say is that it deserved every single award nomination it got! 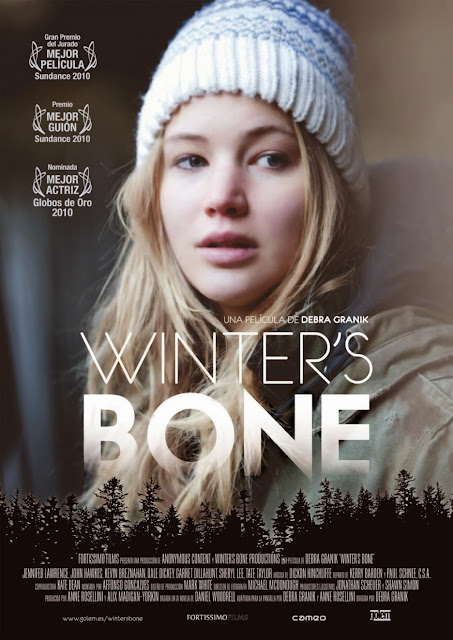 Ree is a 17 year old girl taking care of her little brother and sister as well as her sick mother. Her father Jessup cooks crack, which is the reason why her mother broke down mentally over the years. Unfortunately he is gone missing and he has a court appointment, which if he doesn't show up for, their house will be taken as it is up for bond. 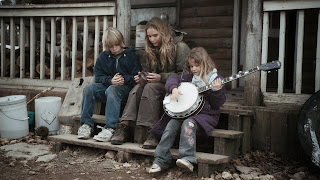 Ree tries to find him by going up the family ladder all the way to their leader who is responsible for the whole family operation. She is warned several times to stay back, but her family home is way too important. Not to mention that it seems something really did happen to her father as he is nowhere to be found. She is helped along the way by her only uncle, Teardrop, who at first refuses, but then realizes that nobody can kill his brother and get away with it. Ree is afraid to lose Teardrop as well, but she cannot give up and in the end it turns out that her father was helping the sheriff, who told on him and because of it he lost his life. After he is proven dead, the family gets to keep the house and the movie ends with Teardrop heading off to get revenge. 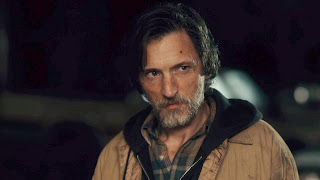 I really liked this movie. It almost scares me how much I liked this movie because it is really dark, and sad and... it's just nasty. The most frightening thing about it is the fact that I believed every second of it. There is a family like this out there. There are people whose decisions are defined by blood relations and I do believe that some sell drugs to make a living in the current economic state. This semester I actually had a class on the geography of the US and the minute they uttered the words 'Missouri' I zoomed in on the blank map in my head and from that point on I felt I was part of the movie. 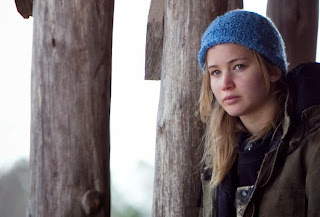 Getting back to the story: The general blue and gray color of the film is supposed to have a depressing tone, but really, for weeks now there is nothing but fog here in the city and it actually very realistic to me without being forced. And well, no matter how sad the story was, it never really was depressing for me. Actually in the end the movie has a pretty positive outlook after all the shit Ree goes through - they get to keep their house and they even get money from somebody who deposited bond for their father. It is, however a bit scary that her uncle Teardrop will probably be consumed by his vengeance. But to that I need to say that it was written in a very noble way: You see, the aim of the story for me was to show that some have a faith that cannot be escaped. Ree's father Jessup was victim of his activities, while Teardrop will pay the price of not that caring for his family; and out of the three it is Ree who is destined for better things. 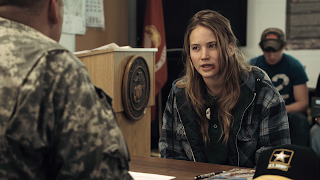 My favorite scene in the whole movie was when we find out that Ree is planning to join the army, but her plan is delayed when her father went missing. She does, however meet with a soldier at a recruitment and she has a serious conversation with him about the money she would receive if she applied. The scene is pretty straightforward and my favorite thing about it was that neither Ree nor the soldier sugarcoat the fact that she needs money and she needs it now and she needs a home in case they lose theirs. You don't get such raw and honest conversations like this in movies and let me tell you, the whole movie is worth it for just that singular scene! It ends with the soldier telling her that she is welcome to join when she becomes 18 and that there will always be a future for her with the army - which I thought was really nice. 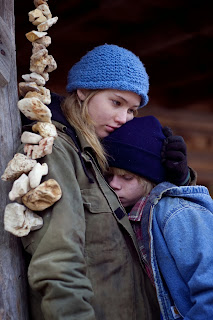 Two more scenes have to be mentioned - and no, not the when where Ree skinned a squirrel, although it was pretty amazing - but the one where she was beaten up by the women following the big leader of the pact. Ree is told to back off from searching for her father and she is then taught a lesson for not listening. Afterwards she goes home, her friend helps her into bed and her brother and sister lay down next to her so she is not alone. The whole scene was so strong and touching and no big speeches or extra actions were needed to make it memorable. The second one is when Ree is taken to the site where her father's corpse was dropped. She is supposed to chop his hands off for the DNA exam to prove he is dead, but she is not able to do it. What I loved about the scene was that is wasn't grotesque, although a bit inhumane, but otherwise just simply entertaining in a very psychotic way. You are there with the main character, you feel her pain and disgust, but you cannot look away. As I said before, although very dark in some places, the movie does actually end on a happy note in my opinion so I excluded all the bad things from the movie when it concluded. 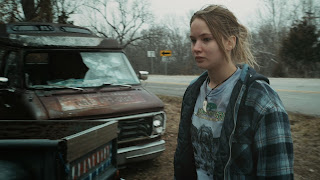 There was only one problem I had with the movie. This is really stupid, but I have disease when it comes to being tidy and every time I saw the mess around their house I just wanted to get in there and tidy up! Sorry, I know, I'm stupid, but we all have that one little thing that drives us insane - this is mine.
As far as casting goes, those Oscar nominations were dead on! I am sort of glad that Jennifer Lawrence received it with Silver Linings Playbook instead of this, but I do agree that out of all the nominated movies - and I watched them all - this movie was the best one indeed! And John Hawkes? Give that man more leading roles! I could watch him for hours and hours!

So, watch it? Yes, please do. It might shake you more than it did me so be aware. But as far as Lawrence movies go this is a 10/10! I am pretty sure I'm actually gonna watch it again before the New Year's Eve. Until the next item on my list!