I decided on writing something very smart and wise as the beginning of the entry. But nothing really came to me, and you'll see why once you read it. So, this movie... yeah. 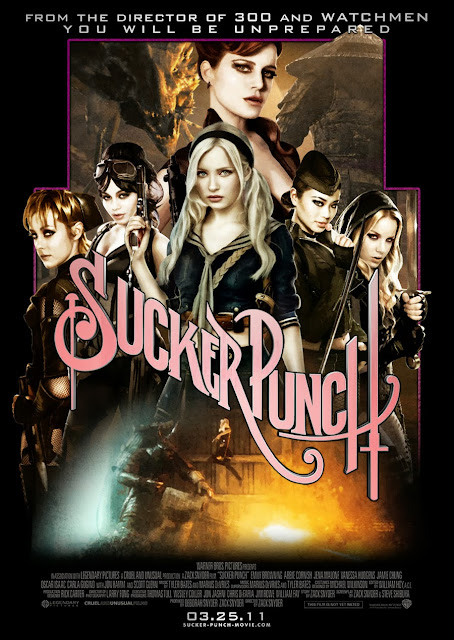 Our story revolves around five girls, all locked in a madhouse. Babydoll, Sweet Pea, Rocket, Blondie and Amber all part-take in a therapy called 'Theater'. Here, they all assume new identities and live in a fantasy world. 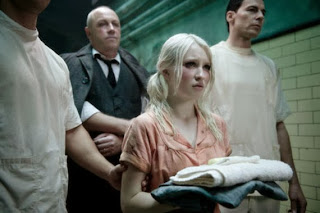 Basically most of our movie is set in this world. The original fantasy is that of the girls living in a brothel where Babydoll is only a newbie who doesn't see clients yet, but she learns a lot from the other girls. When their doctor, Vera Gorski and the head male nurse Blue Jones discover that Babydoll has a kind of hypnotizing dance, they promote her onto the stage. In the movie, whenever she starts to dance, we move onto a completely fantastical world where the girls fight off dragons and participate in wars and so on. They are given guidance by a Wise Man who never appears anywhere else. In the fantasies, unfortunately, Rocket and Blondie die and we soon discover that it wasn't just theater, Blue Jones had actually taken out the girls one by one because of misbehavior. Dr. Vera Gorski finds out that Jones had been forcing girls to get lobotomy without her authorization and he is stopped just before he gets his hands on Babydoll. In the fantasy, Babydoll realizes that this was never her story, and that she is not supposed to get out, she is simple here to help Sweet Pea back her life, outside of this madhouse. 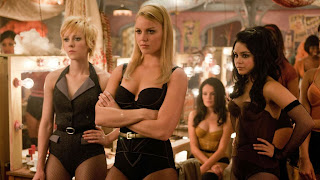 Visually? Stunning. Casting? OK. Story? THE FUCK JUST HAPPENED??! That is actually only the initial reaction, because as you can see when you sit down it comes together, as I too did a pretty good job summarizing it.
Honestly I am really mad at this movie. People said it was bad, but I didn't care. The trailers? I just shit my pants they were so fantastic and honestly, not much was needed to make the movie just as awesome as the trailers. Overall, it is all a big music video and that is fine with me because I like music videos. And this movie? I wanted to like it so much! And the funny thing is that if not for one singular thing that I missed I would have had no problem with it. 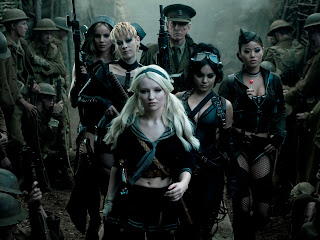 Each time Babydoll starts dancing, we immediately move over to the fantasy and we are only supposed to believe that her dancing is so exceptional! We can't! Show us at least two steps from her goddamn dance routine! And that is the only freakin' thing that drove me completely insane and that is why I will never rewatch this movie!
Later on I found out that a lot of scenes that actually make the story interesting have been cut out for some unknown reason. The movie really wants you to think about what happened and why and to see the beauty of it, but no. It just doesn't work if you leave out key elements that make up the story! 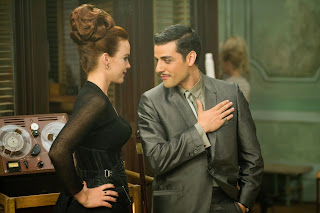 Imagine if you were watching Romeo & Juliet and they left out the part were Juliet is given the bottle of medicine that slows her heart down. Now, the death along with Romeo's sappy monologue wouldn't really make sense now, would it?
In the end we are not even sure why should a mad girl escape the place where she is given treatment - I mean Sweet Pea. I only came to the conclusion that she wasn't mad at all and she was just a plaything Blue Jones used to get money. But if she wasn't mad, then perhaps Dr. Gorski should have noticed, as she really was a doctor... Oh I don't know! This movie makes no fucking sense without the deleted scenes! And even then there are huge gaps in it.

I will say this: Original idea that was poorly executed, unfortunately, but perhaps it will give way to new movies like such. Just make sure that you have a working script, and if you decide to just make a big music video, then leave out the dialogue and concentrate on the body language and the songs!

That said, I'm sure you have enough about this movie to make up your mind. I will say that it is worth watching at least once, but don't expect too much.
Until the next item on my list!