After telling you about my thoughts on the first installment of the series, I thought I would talk about the second as well. Keep in mind that I will not be talking about the third... You see, one of the reasons why I wanted to watch these movies after so many years of 'not caring', was because the third had a really good trailer and I felt like a fraud if I only watch the third without seeing the beginnings. And well, I was really disappointed in the third one because that is overall just a big movie about pranking, while the others showed a lot more creativity in my opinion. So, we will not cover that, we will talk about:

So, I wasn't joking when I said that Terry Benedict was always one step behind them. He gets every member of the gang and threatens them with paying back every cent with interest. They all get together, and realize that they need a new job in order to pay Terry back. 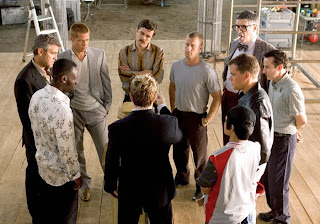 This time, however, they are also being followed by a detective, Isabel Lahiri, who had a relationship with Rusty, and followed by another conman: François Toulour. The latter's pride has been hurt as LeMarque (the best thief on Earth) himself has named Danny a better thief - so he challenges them to steal an artifact from a museum in Rome. If they win the bet, then Toulour will repay their debt to Terry Benedict. The question is simply: How will they beat a thief trained by the biggest master on their planet while being chased by a crazy police detective who won't rest until she's got every one of Danny's crew behind bars? 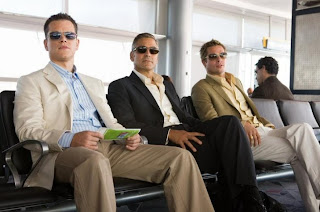 To add to the excitement, the artifact is guarded by a random laser pattern that is impenetrable when turned on. When most of the team is captured, it is up to Linus to come up with a plan, and for that he will need Tess' help. I don't want to spoil too much, but Bruce Willis appears at one point, playing himself! What really adds to the fun in this movie is not the twist in the end, but the minute you understand that they had a plan from pretty much the beginning to the end. And what is genius is that it was all there in front of us! There weren't any decoys to lure the viewer onto something else. 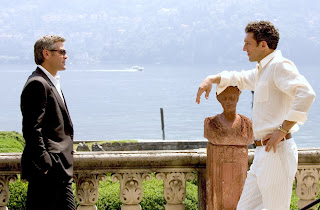 And the other funny character was Toulour. At first I didn't like him, because he keeps bothering our leads, but after watching it again and again I just crack up at what an asshole he actually is.
I really loved the second movie. There are plenty of good sequels out there that people seem to ignore because the general belief is that sequels suck! And yeah, most of the time they do, but if three years are put into a sequel, then there is probably work behind it. I especially enjoyed this story because it takes place in Rome - and I kept seeing myself and the places where I walked and grew up. Again, I was blessed by two great movies before the ending of the trilogy ruined it (is that a rule, by the way? I see a pattern here...). This movie works alone perfectly without the first - however, the fact that we already know and love the characters adds a lot to the story, so be sure to watch the first before you see this one.
There is one point that I didn't like - SPOILER, skip this line if you don't want to know anything from the second half of the movie - in the end LeMarque is revealed. I never liked that, because his identity is kept secret throughout the movie, he is a sort of legend that nobody can reach, and it didn't really add anything to the story in my opinion when we see him. I feel that was unnecessary.

Now that you know, that I won't discuss the third movie, stay tuned to find out what will be #3 on my list of perfect crime movies! I have a really good one for you, promise. Until the next item!