I wanted to leave this one for last because - it is my favorite; I think really sets the tone as far as ending twists go and I have something about Tarantino that I wanted to share for decades now. You might disagree with me, but maybe you'll share my opinion, either way my number one perfect crime movie is: 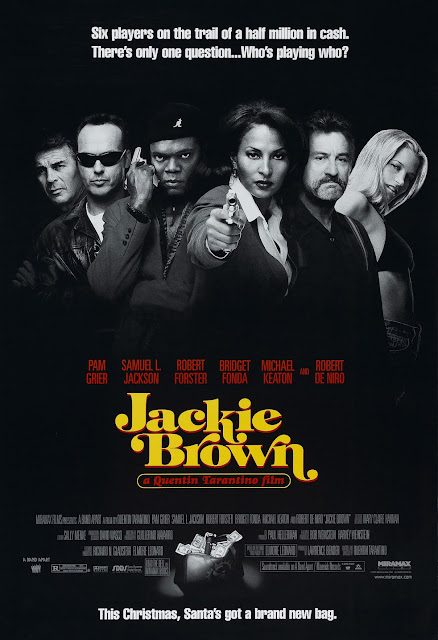 Jackie Brown is a flight attendant who works for an arms dealer, Ordell Robbie. Jackie is arrested and she is asked to help the police in stopping Ordell. She does help them, but tells Ordell previously that she will trick them so Ordell can leave with the money so she doesn't get killed like Ordell's previous employee. 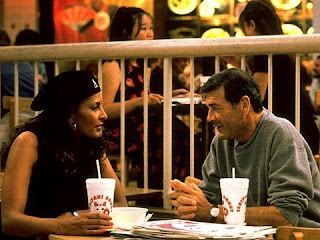 Her plan is to get Ordell's money from Mexico and during the exchange let the cops follow the trail to Ordell while she takes off with most of the money. The police is told that Ordell only asked for a small sum while she leaves the actual bag full of money behind for someone to get it - but things don't go as smoothly as planned. Ordell's partner Louis becomes too old to handle the job and things start to go south when he kills Ordell's girl Melanie and then arrives without the money. The police desperate to get Ordell rely on Jackie to help them out. She turns to the only person she trusts, a bail bondsman by the name of Max Cherry, who she met when Ordell paid him to get her out of jail. How exactly Jackie gets away with Ordell's half-million is something that you need to discover after you watch the movie! 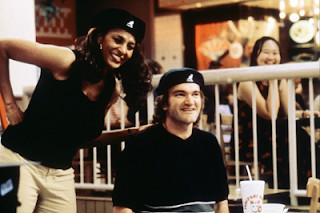 So, a lot of people are going to hate on me for saying that I don't like Tarantino - but now I'm going to explain it to you exactly why. Ever since I learned about him people always told me "He is a genius." I then told them that I don't like blood in movies - I just simply feel it is unnecessary. (I don't like horror movies either.) "Oh, you need to ignore the blood part, and behind that he is a genius." - I can't ignore it. I can't ignore it because here is Jackie Brown which is a simple masterpiece and there is no unnecessary blood pattern spattered over the audience's face. I can't care for the story if I am constantly reminded of what my organs look like if they are splattered all over the floor! Personally I think that a good story is always a good story - I won't tell anyone to not like Tarantino if they can handle the blood. If they can ignore it and enjoy the story then please, by all means, have a great time. I, however, cannot look over it especially because I have seen that what he can do when the focus is on the characters rather then the horror. So no Tarantino for me, thank you very much. 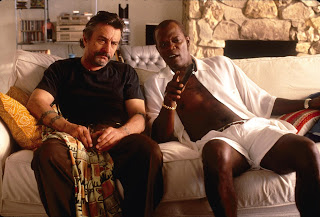 That said, the movie is indeed brilliant. First of all, it doesn't try to be more than it is. You get the picture right away and you are rewarded with a great twist at the end. The casting is exceptional, and I don't often get it when De Niro plays a character, but here he really took a seemingly boring and not particularly interesting character and turned him into something very real. Same goes for Bridget Fonda, whose character is a real pain in the ass and yet she adds a very important role to the resolution of the story. The last person to whom I want to give all the credit to is Michael Keaton, who plays a cop that is literally the living impersonation of the 90's and a police officer who really wants to make it to the big league. His character is sometimes hilarious, while in the end you understand how strong and confident he is. I don't think I need to tell you about the lead actors, because man, if you want top actors playing freakin' badass characters than you will not be disappointed!

Check out these movies, even if not for the story, do it for he music which is honestly off the hook; trust me you are in for a world of fun! Until the next item on my list!