I know what controversy surrounds Tim Burton, ever since he started to cast the same two people in every movie of his. But honestly I don't mind, because they are talented actors who always add something new to the material that is given to them. I also don't care about the peculiar music that is always credited to one person. What I do care about is the movies one by one and although I highly appreciate Burton's vision and his works, sometimes I feel that he is under pressure by Hollywood to produce more, (does the Dark Shadows ring a bell?) while he obviously works better when he takes his time (like everyone else really!). That said, I wanted to talk about this movie as I have seen it for the first time only a couple of days ago: 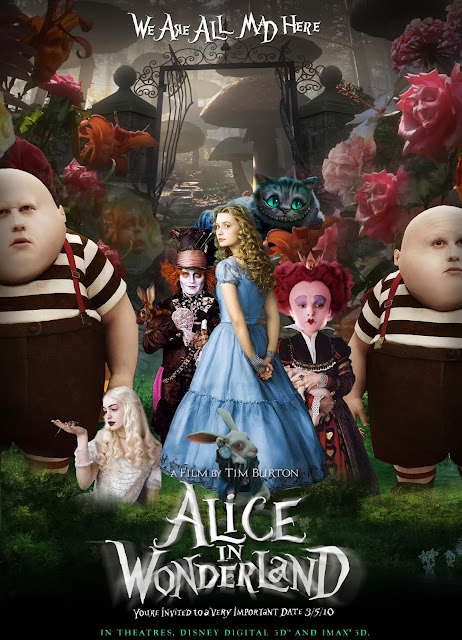 Alice, our young lead is tormented by nightmares. She shares the same nightmare for years to come, until one day it all seems to become a reality when she is supposed to get engaged. She runs away and follows a rabbit with a blue coat down his hole, only to find herself in a place called Underworld. 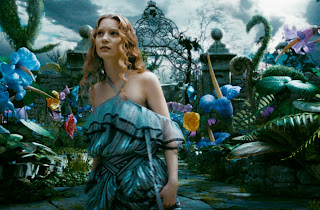 She is supposed to be their savior, as the Red Queen has taken the throne by force from her sister, the White Queen. She is mean and inconsiderate of others and most of the citizens of Underworld wish to see a time where happiness bloomed. In the forest she is taken to the Mad Hatter, one of the White Queen's most trusted allies and she is told that her destiny is that of killing an evil monster that reigns terror on the citizens. She can hardly believe this, as she doesn't think herself capable of killing anyone - not even if her life depended on it. Concerned that she might not be the real Alice, her helpers start to neglect her a bit and she decides to take her destiny into her own hands. 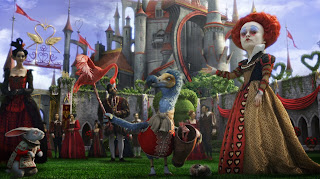 After meeting the Red Queen, she decides that she will help stop her, even if she can't fulfill the prophecy given to her. She meets up with the White Queen and slowly understands that it is not the good guys who are trying to force her into something she doesn't want - she simply needs to learn that somethings in her life she will never be able to control.
After getting their friends back from capture, she heads off to battle with the Red Queen, who chooses her Jabberwocky to fight with Alice. After much struggle she succeeds in cutting his head off. And when offered a chance to stay, she realizes that she is expected home and she needs to start living her life as an adult. 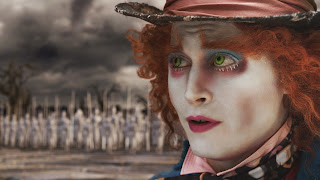 I hesitated in watching this movie, because I don't like scary things, and the trailer didn't exactly scream 'happy fun times!'. Same with any Tim Burton movie really; I always wait. This year, since my sister and I got into the Halloween spirit a bit earlier, we decided to finally watch it as we have heard so much about it. Also, I don't particularly get the fascination that some have with Depp. He is a great actor, I'll give him that, but I'm not in love with him, so I don't really jump over hoops to see his movies. What did draw me to this movie was Mia Wasikowska, who is one of my favorites! And she didn't disappoint! Furthermore, I didn't really know what this movie was about... Oh, booh me all you want, but I have never read the book and I never saw the Disney cartoon. I understood that it was a coming-of-age story, but nothing more. 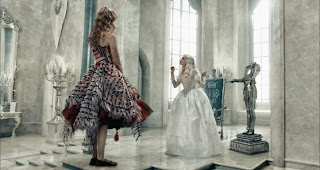 I was very pleasantly surprised by the story, but I did have a problem... THE GREEN SCREEN IS HORRIBLE!!! Who the hell did the post-production on this? There was only one character, Cheshire Cat who was simply sublime! From animation, to story arc all the way to his voice - the very talented Stephen Fry - perfection! So, did all the money go to animating the cat? Because everything else looked like shit! Also, what is it with animating 70% of a movie where the most important things happen to the characters that are real actors? Honestly, it was really off-putting that I could never get into the story because any time I tried, something horrible happened on screen with animation! 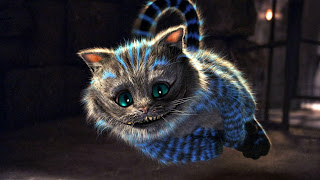 Did I like the movie? Yes, very much. Overall I got what I wanted, even though, right now this story seems more like the collision between 300 other coming-of-age movies I have seen in my lifetime. But that didn't bother me so much, knowing how old actually the source material is. And I was very pleased with the actors as well. One thing, however, that I'm pretty certain should've been cut from the movie is a horrible dance the Mad Hatter did in the end - that alone F*CKING RUINED THE WHOLE MOVIE FOR ME!!!! So if I do rewatch it one day, I'm gonna skip that part!

Watch it? I don't see why not. Opinions are quite mixed on this movie, very probably many had the problems I did, but hey? It was good fun and there are far worse movies out there - trust me! (Does the Dark Shadows ring a bell?).