This is something I wanted to write about for a very long time. For several reasons. I am sure that at some point everyone in their life fantasized about living in America. Starting from religious freedom, to economic reasons, love, better prospects or simply being drawn to beauties that are portrayed on the big screen (or the little screen - I'm pretty sure that Friends had to do a lot with this tendency!). Just last week I wrote about the television series American Dreams (click here to read my review!) exactly to introduce this entry. That series is about family, hard work and commitment. Really the essence of what life should be in my opinion.
Afterwards my sister and I discussed that majority of the people perceive something dream like in movies, while most of the cases they only portray what life really is like for Americans . The big house with a garden, picket fence and a driveway with a basketball hoop; living on a ranch and farming with a thick accent and Stetson on your head; living in the big cities: NY, LA, Chicago or the most basic of them all - finding your place in Hollywood. For some I think it is impossible to understand that they aspire not a dream life, but what is reality for some - and that they cannot ever live that dream because we are different cultures with different pasts. But I guess it is OK to dream.
And just like everyone else, I have me dream too. Of course, there is a bit of a difference in what the 'American dream' means for Americans and well... the rest of the world. I have actually spent some time in the USA. My family lived there from 92' to 93'. My dad was a guest lecturer at Indiana University in Bloomington, Indiana. And I was precisely 2 years old, so I remember - like a lot! (Sarcasm.) However, in 2002 we went back for the ten year anniversary and I finally made memories that I can return to. It wasn't hard to fall in love with that city - if I ever go back to the States, that is where I am headed! Quiet, clean, friendly, squirrels everywhere and a huge campus with a little stream and beautiful buildings. There is a special feeling of peace when you take a walk in this beautiful city. Everything simply falls into place. 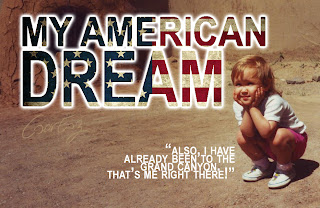 It is really these little cities that excite me. Of course I would like to visit the big cities once - but just as a tourist. I never want to live in New York, and I honestly don't care for California nearly as much as other people do (or at all...). What I want - and I mean really want - is to get into a car with a couple of friends and just see every stupid touristic site. I want to travel through route 66; stop for pancakes at diners; climb the Statue of Liberty and see the Grand Canyon. Even if I've been to Disneyland and St. Louis; also, I have already been to the Grand Canyon, that's me right there! But I want more photos, adventures that will last for a life time - this time. Besides the exceptional sites (Mount Rushmore and Monument Valley in particular), there are two states that I really want to see: Hawaii and Alaska.
Yes, the two are a bit far and well... I know. The one kind of American movie that I am a total sucker for is the ones that are placed in these location. Favorites include The Guardian (one of my the best movies ever made), Eight Below, Big Miracle, The Proposal, also cartoons like Balto, and even horrible movies like Snow Buddies and Snow Dogs (I know these are not all filmed in Alaska, but I like the cold surroundings). As far as the islands go, we have 50 First Dates, Cocktail, Lilo & Stitch, Six Days Seven Nights, and I even like the painfully obviously written by a woman Flirting With Forty. (I am actually watching Hawaii Five-O right now.) I know that Alaska is effing cold, but I don't care - I want to see the polar lights. Not on photos or film, but for real. The other thing I am dying to do is learn how to surf and I don't want to do that anywhere else but in Hawaii. If possible, I want to learn about the different cultures, dialects and the people in person.
I plan a big trip for myself in about 8 years time and I am already saving up. I'm going to see everything there is to see and get it out of my system. There are wonderful things in the USA, I am not saying that there overall two things that interest me in the States. But I watch the news and well... I am disappointed in how idiots the Americans are. The gun laws? A (racist) man kills a boy and goes free? Republicans seem to only have retards and well - tweeting pictures of your junk is a whole new low in my book. And don't get me started on the abortion laws! My favorite quote from SNL "Abortion are an important topic for women... So why are we asking two men about it?" ... These issues are for another day, but you get why I am repulsed by what they are doing over there.
The moral of my story is that no matter what opportunities, other than a student in a small city or a tourist I would never want to live in the USA. I have been disappointed by what is supposed to be the leader of the free world.

You might not have liked where I ended with my entry. You can argue, that in comparison to some countries USA is still prominent - and I won't argue with you. But even if in my country we are turning to a dictatorship, at least I am not afraid of someone shooting me. And I get where the frontier spirit comes from, but if banning guns works in other countries, don't tell me that with a little effort they can't make it happen!

So wish me luck on turning my American Dream a reality :)
Review coming up next week, till then!
Bejegyezte: CsorEsz91 dátum: 5:38 AM