On the list of cartoons I have seen in the past year, there is still one I definitely want to talk about: 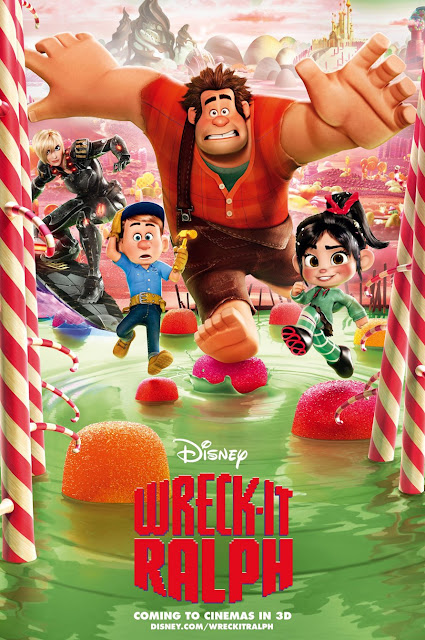 Ralph is a bad guy in an arcade game. Everybody hates him in that world and he gets tired of it. Being able to movie between the arcade games, he sets off on a mission to get himself a medal to prove to the citizens of his game that he isn't a bad person. 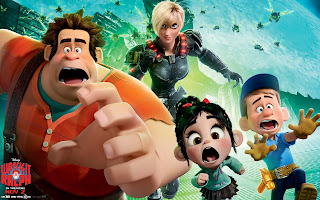 He travels through two games, ending up in a racing game where he meets Vanellope. She is a glitch in her game and therefore the King of her world wants to stop her from competing - if she wins, the game will reset and the glitch will come off as an error, causing the whole game to be shut down. Being a glitch she cannot escape the game, and although the other players can get out, she would die. Upon hearing this Ralph stops Vanellope from racing and he returns home seeing that his own game is in danger. He, however, discovers that Vanellope is printed on the side of the console of her own arcade game and he realizes that King Candy has been hiding something. Vanellope races him and he turns out that he is Turbo, an old racer whose game was turned off and during his escape he almost managed to ruin other games as well. He hid in this world and has been trying to keep Vanellope away, because she is actually the queen of their kingdom. Ralph saves her as well as returning to his game where he finally gets the respect he wanted all of his life. 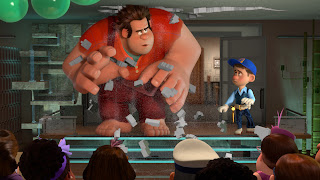 The story is actually quite more complex, but I wanted to cut the summary a bit shorter. Two more important things happened. Ralph is followed by the hero of their game Fix-It Felix, who at first seeks him in a game called Hero Duty where Ralph had won a medal. Ralph was followed by alien insects, cybugs that force the leader of Hero Duty, Calhoun, a sassy woman to adventure with Felix into the candy kingdom. Toward the end of the race, they actually have to fight these aliens. Felix and Calhoun fall in love, making the most weird couple ever, but they are very cute none the less. 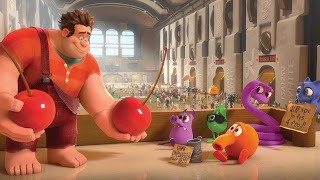 I LOVED this movie. First of all I watched it with my brother who grew up with all of the games that were referenced - and let me tell you there are a lot of them! And it was incredibly sweet how he giggled with amazement throughout the whole movie - and it was the cutest thing ever. It simply made me care for the characters a lot more. Let me tell you that plenty of people can enjoy this movie, mostly because there are references and parodies of many new games; still, you will enjoy it a lot more if you look up a couple of the more iconic faces that appear on the screen. 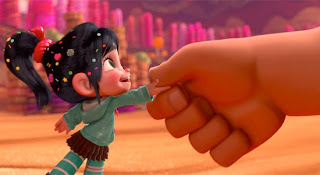 Let alone the fact that the characters get you stuck to the screen. Then you have these clever lines that just make you burst into laughter every minute. As you get to know everyone better, you are also moved by the developing events. The scenery in it is just amazing - really a dream come true if you love Candy Land as much as my family does (it's a board game, 90's reference, no worries if you don't get it :D). To me overall it came together in the story: it was AMAZING!

It had depth, wit, imagination and it was very clever. The thing that got to me was the origins of King Candy. You think that he is just a jerk who wants to be a winner. In the meanwhile we are told the stories of that racer Turbo who with his vanity destroyed his game and apparently died when it was pulled from the plug. And then BAM! He was actually in the game this whole time - that is genius! Not to mention that Vanellope's glitch is her characters special ability and not a defect in the game! So many cartoons have a beginning, middle, but not real ending. We have seen Dreamworks using dancing numbers as a way to end cartoons, and Disney ripping off themselves without adding any originality. Here you have a finish that compliments the middle and the beginning perfectly and it is a true reward for the viewer.

There are so many little things to this movie that I want to tell you about. I just don't know where to begin and I tried to write it down, but really have to see the movie to understand. This one knocked it out of the park for me in every sense. Please watch it. This has been the best Disney cartoon I had the pleasure to watch in over five years. They really out-did themselves in this one, making something a lot more memorable for the elder generation.