What's Next On My List? (Games) Assassin's Creed: Brotherhood

Since I saw the trailer for it, I wanted to play this game. My brother surprised me at Christmas, and now that the semester was finally over, I got time to actually play it through. Let's discuss: 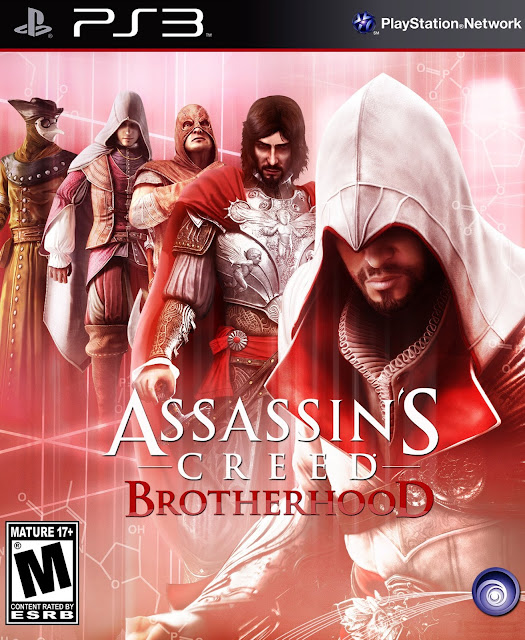 There is something incredibly exciting about running around in my city five hundred years before I actually moved there. It was a time machine, yet at the same time I could walk around with my eyes closed. I wanted to write about this game because I enjoyed it a lot. Actually, it will be definitely one of my favorites, for the exception of two things, that I will elaborate on in the end. If you don't know the game, in a nutshell, you are Desmond Miles, a professional assassin who with the help of a machine called animus, can travel in time in the memories of his ancestors - whom are all assassin's as well.

The story: This was the third installation of the franchise. It is actually an extra to the second one, and story-wise it stands alone. In this story, Desmond Miles spends more time in the animus and we get to play more with his ancestor Ezio Auditore Di Firenze. He has posession of a very powerful weapon called the Apple of Eden, that was constructed by Leonardo Da Vinci - unfortunately this is a stolen by the Borgia family and he is forced to go to Rome and get it back. There he participates in various mission and one by one he has to destroy Borgia army towers in order to liberate Rome. In the end he gets back the Apple and uses it against Cesare Borgia's armies. Desmond in the meanwhile hides in an italian villa while Ezio's memories drives him to the current location of the apple.

Mini-Bosses: Ezio, being an assassin, has plenty killing to do. Here he has a league of assassins who have to be used several times to have full synchronization. But if one prefers to do all the actions themselves, then that is fine too. You can do a lot of missions that aren't important for the main story - but help you earn coins and actually liberate Rome in the long run. The main bosses that you do have to defeat are generals that are stationed at various Borgia Towers (the tower is the base of the influence the Borgias have in a given area). Once the general is killed, one must find a way to the top of the tower and ignite it to eliminate influence. Each tower has a different scheme for how you can climb to the top. You are signaled every time you enter a restricted zone.
The Boss Fight: The biggest enemy Ezio has to face is fighting Cesare Borgia - the first born of the family who kind of goes crazy with the want of power in the game. He kills his father, pope Alexander VI, and even leaves his sister Lucrezia - with whom he had a sexual relationship - behind in order to full-fill his dreams. Cesare is actually drawn to the power of the Apple and says that no man will ever take him down. It is in 1503 that in a battle in Viana, France, Ezio gets after Cesare and there is finally a chance to fight him. Beating him is quite easy, but you need to look out because a team of soldiers will come at you everytime you take away four squares from Cesare's life. What I did was to save up my smoke bombs (you can only have smoke bombs if you have bought the appropriate pouch for it at the tailor); you have three bombs, but two are enough. What they do is completely stop you enemies, they start coughing around and you can easily kill them while Cesare kindly waits for you - then you can resume the fight.
What didn't work?
After defeating him Ezio hides the Apple and Desmond wakes up to get it in real time. And this is were one of the two things that bothered me happened: The ending was not satisfactory - at all! Desmond gets the Apple and he forced to kill Lucy - another assassin who helped us out throughout the whole game. You stab her, fade out and end credits. WHAT? WHAT THE F*CK JUST HAPPENED? The glory of defeating Cesare after all of those encounters is completely wasted as you don't really get an ending. For me it doesn't even count as a cliffhanger. Not to mention that the credits last and eternity and you can't skip it. Afterwards you are put back to Rome, which is cool because you can finish many things that you didn't have time for - this is for the perfectionists like me. 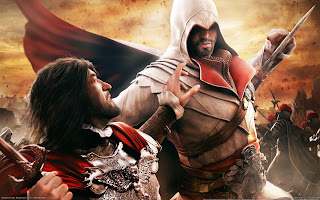 The other and only thing that bothered me was the Apple of Eden. Toward the end you have to use it and it is very hard to use and I didn't like it one bit. You keep buying these great weapons and learn about the combos and then you have to use this godforsaken weapon - and it took me about 20 minutes to realize what it actually does! The game keeps helping you and giving you helpful hints - but when you have to handle the most dangerous weapon known to man: Good luck on your own!

What worked? Everything else. This world is beautiful, I loved the music, the missions, the whole idea I think is wonderful. I haven't played with other Assassin's Creed games, but this one is definitely a favorite. We have such voice talents as Roger Craig Smith (Ezio), Kristen Bell (Lucy) and not to mention Nolan North (Desmond, also voice of Conner Kent in Young Justice!). I know that I will play it until I get 100% on every mission - I'm just angry that I didn't like the ending.

Until the next item on my list!
Bejegyezte: CsorEsz91 dátum: 9:22 AM