So, over the semester I had to write a couple of papers that I was quite proud of. I haven't had time, but I do now, so I would like to share some before I head into the next review. Hope you enjoy them.

The first one was written for a class called 'debate', where he had to research topics, write journals, and the decide upon the motion that we would debate. I really liked the topics, because they gave me a chance to express my opinion and read up on a lot of things. And based on my grades, I can say that my ideology wasn't stupid, so I am quite proud.
_ _ _ _ _

The Reality Television Blob:
The Source Of Unreality

In the past decade reality television has grown itself into a complete industry of its own. The popular Big Brother series, where ten strangers live together in a house with cameras, has open doors to many other series out there. Reality shows have become a necessity on almost every American TV channel and has quickly become a welcomed programming in other countries as well. However, reality television has a far more worse influence on the viewers than any other show on air.
The first kind of series that hit the screens were dating shows. Unfortunately, these are known for a kind of editing that makes the date in discussion more entertaining, fast paced and interesting. With it the shows portrays a kind of false reality. The viewer is left believing that love at first sight can easily happen, not to mention that every single blind date will result in success. Of course, there is nothing bad in trying to find something positive in things – but reality TV blindly lies into the face of its viewers. 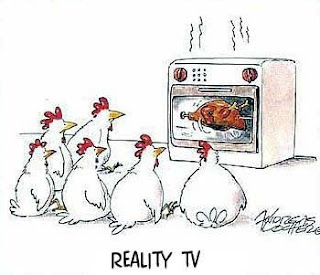 Nowadays several series are only developed for certain channels. MTV is known for the kind that is targeted to a younger audience. Unfortunately, reality TV winners tend to resurface from time to time in the media – giving the impression that staring in one of these shows will bring fame and success with it. The show Teen Mom, which was a continuation of the widely known 16 And Pregnant series, had actual moms who pre-planned having children in order to get some air time. “But inspiring teens to get pregnant as a route to celebrity? This type of television is no longer just ‘exploiting’ problems. It is now creating the problems." – Says Rabbi Shmuely Boteach, as quoted in PopEater.
“It's a harder case to make, though, that taking liberties is a crime against viewers, who widely accept that the shows use the term reality loosely.” (Chambat, P., & Ehrenberg, A., 1993) Although these kind of series are known to be often scripted, people seem to either don’t care or simply forget. It is actually because they are still categorized as ‘reality’ that many viewers are confused and are drawn to find sympathy and create connections with the protagonists. Problem however being that cooking shows as well as discovery and science programs also fall under this category: These of course support the educational purpose of these shows far better than the usual teen dramas.
Reality television has grown so fast that what actually belongs to it has never been specified properly. These shows can be divided based on the topics they discuss; the channels that air them; the editing and even the length. The executives don’t seem to take into consideration how the viewers are affected by what they watch. If it was just a source of entertainment then it wouldn't be a problem at all. However, it is not.