So, over the semester I had to write a couple of papers that I was quite proud of. I haven't had time, but I do now, so I would like to share some before I head into the next review. Hope you enjoy them.
The last one I'm going to post now is from a class that was called 'Content Based Language Development', and each specified in a given area, and I did one in tourism. I have always been interested in this area. I had a hard time choosing which assignment to post, because we did a lot of great works over the semester. In the end I decided on a restaurant recommendation. I will post the actual advert I made and separately give you the writing.
Ez a házifeladat a kedvenc éttermünknek egy ajánlójának kellett lenni. Én a Siófoki Golden Bridge Steakhouse-t választottam, aminek a honlapját itt megtudjátok nézni: http://www.steak-house.hu/ Csináltam egy reklám lapot, amit posztolok és külön a szöveget is, hogy könyebb legyen olvasni. 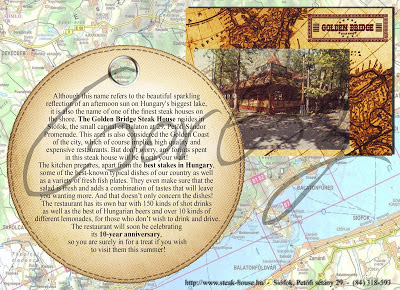 The Golden Bridge On Lake Balaton

Although this name defines the beautiful sparkling reflection of an afternoon sun on the Hungary's biggest lake, it is also the name of one of the finest steak houses on the shore. The Golden Bridge Steak House resides in Siófok, the small capital of Balaton, currently on Petőfi Sándor promenade 29. This area is also considered the Golden bank of the city, which of course implies high quality and expensive restaurants. But don’t worry, any forints spent in this steak house will be worth your wait!
The kitchen prepares, apart from the best stakes in all of Hungary, some of the best known stereotypical dishes of the country as well as a variety of fresh fish plates. They even make sure that the side dressing is fresh and adds a combination of tastes that will leave you wanting more. And that doesn’t only concern the dishes! The restaurant has it’s own bar with 150 kinds of shot drinks as well as the best of Hungarian beers and over 10 kinds of different limonades – for the ones that cannot drink alcohol.
The restaurant will soon be celebrating it’s 10 year anniversary, so you are surely in for a treat if you wish to visit them this summer!
Bejegyezte: CsorEsz91 dátum: 7:34 PM