So, over the semester I had to write a couple of papers that I was quite proud of. I haven't had time, but I do now, so I would like to share some before I head into the next review. Hope you enjoy them.
The second one if a small essay, for a class that was titled Eastern Europe In The Media. Our job was to see Hungary from a tourist point of view - which wasn't nearly as hard as it sounds. Thankfully, having grown up in Italy, I do often feel like an outsider. I was told that my style is very awful and that I am incredibly informal. I don't see it, but either way, it is fine for blogs. 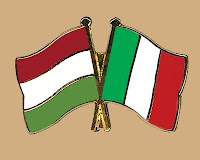 It is quite hard to view your own country as an outsider. However, having had the pleasure of being brought up in Rome (Italy), I am blessed with being able to differentiate between cultures. Even if my nationality bounds me to Hungary, I feel that I am more Italian in my heart. I started and finished elementary school there, I got deeply embedded in their culture and I met some wonderful people. Not to mention that when I moved back to Budapest from Rome I was more perceptive to the differences in our cultures.
Where could I begin? Well, Hungarians are really quiet. Of course my generation can be pretty loud at times, but the Italians cannot be beat as far as volume goes. The Hungarian is somewhat introverted, always tired and never seems to be in the mood to talk... The thing that stood out the most is the expression on people’s faces: I am not saying that the Italians smile all the time, but you are less afraid to ask for help or initiate a conversation if you have to.
In the five and half years I have spent here I realized that I lack physical contact with people. I am used to handshakes, hugs, bumps and kisses on the cheek. I firmly believe that this obsessive distance keeping results in the Hungarians being hungry for affection. However, not really knowing how to express or receive it, they turn into angry and bitter people.
Everyone likes to receive praise and acknowledgements, but you are likely to see people take part in team building exercises that teacher induces in classes and multinational companies force on their employees: This is due to people becoming bitter and over-competitive – to a level that is hard to control. Unfortunately, the recession has not helped out in this department – people do not want to share their success with other co-workers.
But this does not only apply simply to adults. Think of students: They just do not care about anything. One of the hardest things to do is find people who are passionate about something – or anything for that matter. This unfortunately is a trait that we share with the young Italian generations as well. Although youngsters are more approachable and more likely to get lost in conversations, they still seem to be somewhat lost in this big universe of ours. And that would not be a problem, if they were provided some guidance. But they can only turn to over-competitive bitter and angry people.
In the end, the one thing that seems to differentiate the two cultures the most is laughter: Any and every form of it. Hungarians are incapable of laughing at themselves. The Italians have just been reached by the recession; the government is openly known as corrupt; jobs keep disappearing by the hour and yet they are still happy. It is too bad that this happiness does not seem to rub off on the Hungarian population.
Affection and laughter – to me personally it is the key to a happy life. I fear that even if present, Hungary lacks in both. We should really try and learn from our neighbors!
Bejegyezte: CsorEsz91 dátum: 6:09 PM