Breakin' It Down With Catherine Reitman

Growing up I had many favorites, but there is one movie that I have seen so many times that I can't even count it. That was Beethoven's 2nd. I think it is one of those sequels that are far better than the prequel. Two years ago, however, while watching It's Always Sunny In Philadelphia I couldn't help but notice that Dennis' old love was played by a the same person who played a young girl, the love interest of one of the main character's in Beethoven. This was Catherine Reitman - my brother and sister discovered her show in the meanwhile and we started watching it. 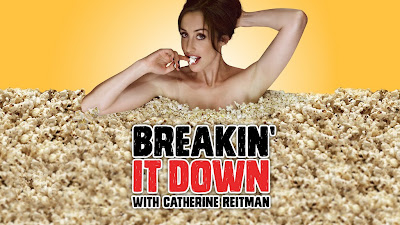 If you don't know it, she reviewed two movies every week that were 'fresh to the theater' and also an old movie that she was asked to do in the comments. The show had a new episode every week, it was about 5-8 minutes long and at the end of each she paid homage to one of the three movies by getting inspiration on how to kill her sound guy Harry - he literally died every week. 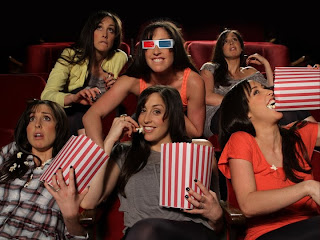 I loved this show because not only was it hilarious, but it was something I shared with my brother and sister. It was always five minutes in which we laughed are asses off! Unfortunately the show seems to have ended after 100 episodes. It is unclear why, but in a video recently they explained that they plan to do something bigger, similar, but different. And that is fine, but I just can't wait to see it! I am actually scared that nothing will be of it, because they don't seem to want to give us any detail. Either way, I'll wait because this is one of those special shows that really deserve it!

The reason why I am writing about this now, is because something awesome happened! I wanted to tell you about the show earlier on, but since there were no more episodes I just wanted to wait. About a week ago a video was posted by them in which they explained what was going on. In the video they asked questions that were posted in the comments, and guess what? :D MY QUESTION WAS ASKED!!! (and I don't even remember posting it...) Harry the sound guy read out my name and I almost passed out! It is at the 4.40 minute mark.


Yes, that is not how you pronounce my name, but actually that is how I have always been called abroad so I feel that is how it should be pronounced now. In case you don't know this show, if you watch this video in particular you will sort of get my question, but I want to tell you about the background a bit. In the show there is one extra character called Tom the intern. He is just a creep and Catherine is quite disgusted by him - he is hilarious! My sister loves him, but they play on the disgust so well that I just can't tell anymore when they are serious and when they are just kidding! So I asked them which was their favorite moment with Tom. Personally the answer was very satisfying!

I am very happy about this because growing up some people keep telling me that I am really nobody and nobody cares about me. And I do believe that it is actually true - so when small things happen, like receiving a comment on one of my entries; or my Youtube videos; or receiving an honorary award for one of my photos on flickr is simply awesome! Catherine Reitman is somebody whom I consider to be a Hollywood star and knowing that among all of those hundreds and thousands of comments she has read mine, that of a little nobody from Hungary? It is the best feeling in the world.

She is now expecting a baby, so I want to wish the best of luck and all the happiness she deserves to her and to you reader, check out her videos on the channel, I promise that you won't be disappointed - click here: Breakin' It Down
Bejegyezte: CsorEsz91 dátum: 7:18 PM