What's Next On My DC List? (Games) Lego: Batman

I had a real hard time deciding which review to come next, so I decided to wrap up the Batman reviews before going to to another superheroes. We have already discussed him and Superman, and I have introduced live-action TV series based on DC comics like Arrow (click here to read review!). Shortly, we will come to those, anyway, let us wrap up Mr. Wayne's appearances in all of the available mediums, last up: games. 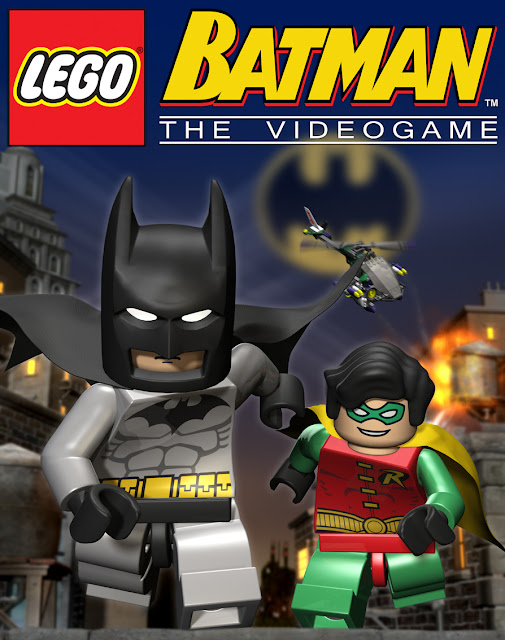 What you need to know about this game is simple, if you love everything and everybody in Batman, you're going to love this game. All of his well known enemies show up: Clayface, Poison Ivy, Riddler and of course the Joker.

The story: Batman and Robin have three big missions to complete. You get to choose the order of course when you start your game in the batcave. You get to choose between three missions: Batmobile, Batplane and the Batsubmarine (if that is its name!). In each there is an epic boss along with little fights. If you have finished one mission, you get to play it's counterpart inside the Arkham Asylum, where you get to play with another three missions: Joker's, Penguin's and the Riddler's. As you advance in levels you unlock more heroes, among them Batgirl and Nightwing. You can use them to ... (read under bonuses!)
The boss battle: At the end of each mission you encounter the epic boss, these are Joker, the Ridler and Penguin. Before you beat each one you need to get through the levels of course. The main thing you need for this game is a partner. In each level you have your sidekick with you, and even though the computer works perfectly, it is plenty more fun to play with a friend. I did with my brother, he had to be the sidekick of course :D. Most of the time you cannot just beat the boss, as they usually stand somewhere and shoot at you. Now, in these cases you need the help of that sidekick. As I said, the computer works fine, but having a friend know exactly what you need can speed things up a bit. It is hard to beat those bosses anyway! However, if you have played one level through, it is quite easy to play with the others. But random
Bonuses: You get to replay each level until you find all of the hidden objects and then you will have yourself statues in the Wayne Mansion. Among them a big Batman statue too. In order to get all the bonuses you will have to use different characters, that is why you need to unlock them. That is probably the best part: when you play alone. You see, with friends it is different, however, seeing that all of the characters stay true to the origins, it is so much fun to become the characters. There are plenty of Batman games, the fun part is having a chance to play with all the other version of him and his sidekicks. Not to mention his enemies!

This game is great, it belongs to the first LEGO games series, meaning that the characters do not talk just yet, the way they do in the new Batman 2: DC Super Heroes. I unfortunately haven't got my hands on it just yet, but it is up there on my "Top 5 games I want for Christmas" list!
Usually here I would tell you about things that don't work: I cannot do that. I love every little LEGO piece in this game! The idea is great, the graphics are wonderful and it is a blast for both Batman fans and LEGO fans (and who doesn't like LEGOs?). LEGO has set up a great franchise and have put the bar high: this game is up there too! They do not disappoint.
This is one game you need to get! The story isn't that long, but if you want to get the maximum point in each, you will find delight in replaying the levels, instead of a nuisance!
Bejegyezte: CsorEsz91 dátum: 9:38 AM