If Epic And Awesome Had A Child: Young Justice

Now, I have decided to leave this for the last DC review, because this is the 150th entry of mine! Also, this is the very reason why I started Comics Summer and then went on to Comics Autumn, as there was no hope of finishing all the comic based reviews on time... So, I decided to save the best for last! Let us review: 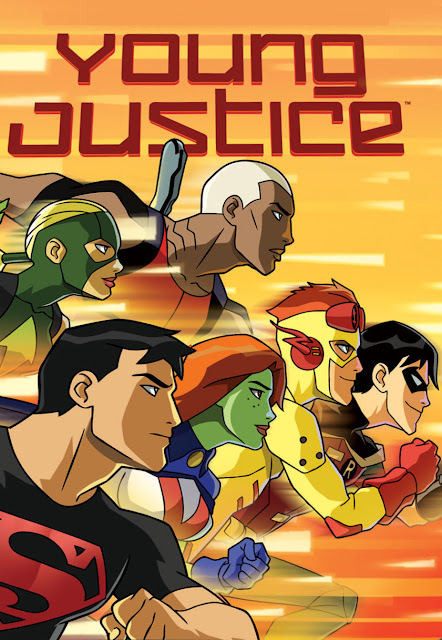 Oh, my God. This series is AWESOME!!! I have no words to define it, but I will try just the same! But you can probably guess my love, if you look at the logo, or have read my top 5 DC characters (click here!). 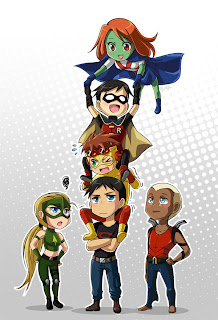 We begin with Robin, Kid Flash, Aqualad and Speedy getting a chance to join the Justice League and not be sidekicks anymore. However, it seems that the grown ups don't plan for them to be involved in serious action just yet. Speedy gets angry and leaves, while the boys decide to investigate some leads on their own. They end up in an underground laboratory and discover Superboy - a genetic clone created from Superman and a human, who at the moment is still unknown. The laboratory gets blown up and the whole Justice League (and I mean everyone!!) shows up to yell at the boys. But they stand up for themselves and proclaim that they shall fight crime whether they like it or not. They form their own group, with an addition, M'gann M'orzz, Martian Manhunter's niece.

The first season was 26 episodes long, during it, the team has another member join them, Artemis, daughter of two known criminals, but protege of Green Arrow. During the season we get to see Speedy become Red Arrow and Superboy discovers that his human DNA arrives from Lex Luthor. There is also an evil group known as 'The Light', who is trying to destroy the Justice League: Enemies like Sportsmaster, Black Manta, Luthor and Vandal Savage. 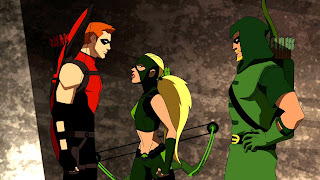 The group seems to be working together perfectly, but there is trouble in paradise of course. Red Arrow has known Green Arrow all his life, and he seems to be troubled on where did Artemis exactly come from. M'gann and Superboy find a connection and fall in love; but Superboy has a need for guidance that Superman isn't capable of giving him - and it seems that Luthor is - but we all know what that means... Aqualad has trouble deciding between the surface and the underwater world, which leaves him conflicted with the team; not to mention that Artemis and Kid Flash keep fighting in order to avoid their obvious attraction to each other. 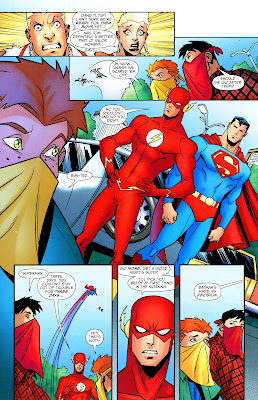 Now, while following the stories, you will probably notice that there are a couple of question marks left for the viewers. Well, no worries there, as they are all explained in the comics!!!!!!!!!!!! THERE IS A COMIC BASED ON THIS SERIES!!!! THIS IS GENIUS!!! Not only you get to see them in action with great voice actors and every episode featuring a member of the Justice League, but you also get to read about them. There is a gap between season 1 and 2 (which we'll cover in a second) and a lot of the questions in between are explained in the comics. Not to mention little things like Artemis' past, which later on was of course revealed in the series, but you already get an answer in the comics. In season two we get a lot of new characters and they are introduced so you know what to expect. The comics have a slightly different drawing style, but they still remain true to the source material. Not to mention that each comic concentrates on the background of the characters and you get to know them better a bit. Another thing I loved is that I discovered story lines of the Justice League, that were previously unknown to me. One example would be a comic that featured Batman and Robin, fighting with Talia Al Ghul, who confesses to having loved only two men in the world. One of them is of course Batman, the other one is a poor soul who was turned into Clayface, in this version of the comic. The team is called in to fight him. However, my favorite one was when the team was recruited by Captain Atom to solve an almost 40 year old case! That comic was wonderful! 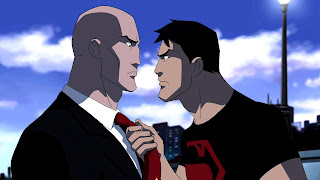 Before we discuss the second season, I wanted to say that another thing I enjoyed about the stories, was that even though the sidekicks have proven themselves previously, one thing we learn, is that even the grown up heroes have need for improvement. These are just kids, even if they know right from wrong, they are still only kids! And kids need to learn. Batman sends Red Tornado to live with them in Mount Justice; Black Canary trains them and Captain Marvel looks in on them often (him being a kid as well). They put emphasis on the basic parenting skills these grown ups already have, and I find that to be very touching. I find that these cartoons that feature all of the heroes, never really focus on their true identities, while the basics on how and why they became heroes is fundamental! The cartoon keeps showing you and reminds you that they are people with feelings: conflicted feelings. Just like their enemies: they have all this power thrown into their lap, and the temptation to use it for evil is really big! 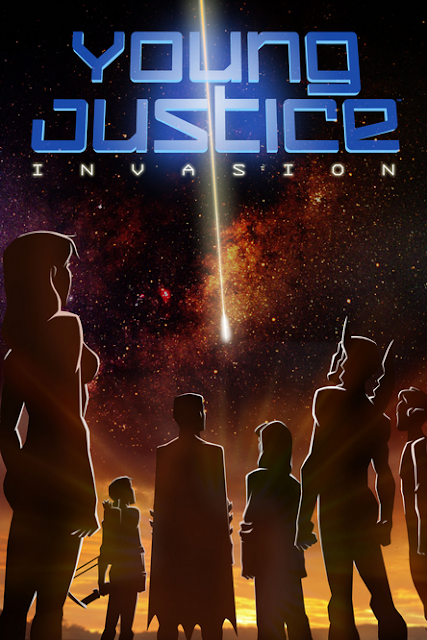 The Invasion signals, that beside their enemies on Earth, our young team of superheroes has to face extraterrestrials who are trying to invade their planet. (check out the original trailer here!) 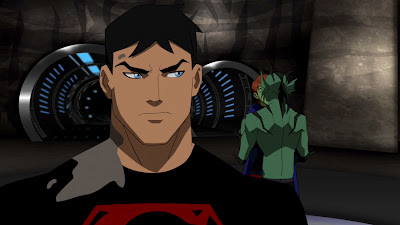 As the season begins, a couple of questions come to mind immediately. There was a 5 year jump from the last episode and a lot of things seem to have changed. Artemis and Kid Flash retire their costumes and move away from crime fighting together. Most members of their team are offered a chance to join the Justice League, but Robin, now Nightwing, Superboy and M'gann decide to stay and train the new squad of sidekicks. It seems that the last two have decided to stop dating, but there are still some unresolved feelings. The biggest change, however, is that Aqualad has left the group and decided to join 'The Light'. This is a big problem for our team, as their constant fights with Aqualad distracts them from their official targets. 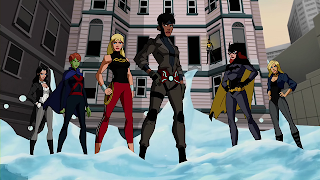 The story is wonderful for many reasons: it is great to see our heroes grow up. You know how these sidekicks get new identities, just like Speedy became Red Arrow, and you want to see that! Well, the creators didn't leave us hanging! Not only they still pay attention to our heroes, they also bring in other ones whom we all know well and love: like Blue Bettle or Batgirl!
Not to mention that they make you even more curious in finding out what happened and they reveal it slowly. You understand that M'gann has changed her ways and that Superboy didn't agree with that. You see that being heroes consumed the life force of Kid Flash and Artemis and it was better to quit. You see this because they have all changed, they are all grown up. You see that this young kid that kicked bad guys in the face, has taken the role of a young Batman in Nightwing's persona and he now understands all the obstacles that where put in front of the grown ups. 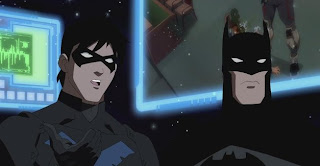 You get that Superboy has no reason to be angry all the time, as he has developed a relationship with Superman and has now found his place in the world. One of the most interesting stories, however, is that of Red Arrow, who finds out that he is also a clone, just like Superboy. He searches for the real Roy Harper with his wife, Cheshire (Artemis' sister); and when they find him, his revenge takes him to Luthor who gives him the necessary props to become his new identity, Arsenal.
Mostly, what you get is a chance to see these heroes and their sidekicks as families, not so much as individuals who's only mission in life is to save their given city. And I find that to be a great approach.

Only problem I have with this series, is that it airs a couple of episodes, about TWICE A YEAR!!! FOR F*CK SAKE I WANT MORE!!! I keep worrying that it will get cancelled or something, for example, I waited several months for the episodes that were aired in September, and they aired TWO! And I mean, TWO!!!! Somebody uploaded a third, but that wasn't supposed to be there... WHAT THE HELL?? Don't leave me hanging Young Justice, I want more! (I love you...) According to epguides.com there are more episodes to come in 2013, I cannot wait! And also, a video game, Young Justice: Legacy is set to come out next year, it should be awesome! So, in case you still have any doubts, trust me, this is a series you'll want to check out if you like superheroes and/or Cartoon Network shows!


That said, we have concluded our DC reviews for this year. Hopefully, I'll get a chance to write a review on Lego Batman 2: DC Super Heroes, however, the exam period is about to start and I still have plenty of Christmas reviews I have to do before the year ends.

Until then, keep checking for my comic reviews on the page above (or click here!) as we still have plenty of ground to cover: V For Vendetta, Watchmen and for course the Hellboy movies. I hope that somewhere in the near future I'll get a chance to play with Spider-Man: Shattered Dimensions... Thank you for sticking with me, and until my next review, which I believe will be The Hunger Games, make sure you read as I am aiming for 20,000 views by January the 1st!
Bejegyezte: CsorEsz91 dátum: 5:21 PM