Homework Assignment: From A Vampire On Stage To Dubbing In A Blink Of An Eye

Krisztina Nádorfi is an actress who is mostly known for her lead role in the musical Tanz Der Vampire (Vámpírok Bálja); what people may not know is that she is also big in the dubbing industry – actually, she might be the voice of one of your favorite characters! 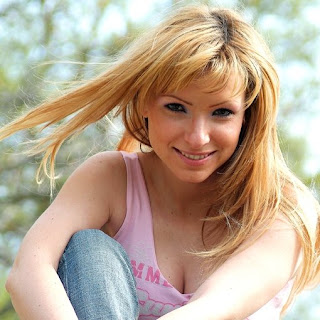 R: Do you have a favorite song? Both performing and/or as an outsider?
KN: ‘Piros Csizmák’ (Red Boots) (click here to hear the song!). I believe it is the best song and at the same time the hardest. The viewer may not know or see that we have a couple of songs before it that completely drain our energies, not to mention our lungs... This song is one of those examples when we breathe through our skin! But that extra kick makes it much better.
R: What ended your run with the show?
KN: My contract had expired. After a talk both they and I agreed that there was no need to extend it. It was time to let the youngsters have a chance at it.
R: Dubbing. That seems to be an interesting jump from musicals. Tell me, how did you get across this job?
KN: A friend of mine was dubbing and once I asked her to help me get in, seeing that I too was interested in it. It was just my luck that on the same day I left my phone number (this was at Filmhatár Stúdió) they needed someone and called me in instantly. And that is how it all started – and it seemed like a really good fit for me. It is important to be hard working, that way the directors will want to work with you, and they call you to other places; then the production managers get to know you and slowly my name was at every studio’s desk. But this is a whole different career. People think it is easy, it is not. You need to learn it the same way you would with any other profession.
R: Did you have any prior training?
KN: No, I was lucky enough to have a talent for it. Not many do. There are these training programs that help you speak better. People think of them as schemes to rob one of their money, but they are in fact very useful, not only for those who plan a future in the dubbing industry; also for those who have problems talking in front of people, or have basic communication problems. Think of job interviews where you need to sound your best; or if you embark on a career where you need to stand out in front of three and more people and speak in a way that you are understood. I can also give you examples of people who clearly aren’t meant for dubbing, even if they are great actors. You can of course learn the technique; however you need to be able to act with your voice. Biggest difficulty being that obviously you are not the one playing the part: You just need to provide a voice for the actor who has already played that role. But in this industry you need to trust the directors. If they know you, they work with you – it takes a long time to get to the good roles. It is a really, really, really slow procedure.
R: What was the latest work you’ve done?
KN: The latest? Erm… oh yes, it was a voice over for a dating reality show.
R: Can you mention any roles that you are particularly proud of? For example on the big screen?
KN: Yes, in Avatar I was the voice of an Asian technician in the beginning of the movie. It wasn’t a big part, but still, I am quite proud of that. I also voiced some of the characters in the movie Valentine’sDay (Valentin Nap). Another favorite would be the typical blonde: in this case Sherry, in the movie Must Love Dogs (Kutyátlanok Kíméljenek). That scene was even uploaded to YouTube with the Hungarian dubbing (laughs), people seemed to like it. (You can see the scene below!) I mostly enjoy roles that have something special about them, this last character was such a stereotypical character that I enjoyed it far more then I would’ve with others. I don’t particularly enjoy those Spanish and Venezuelan women who don’t really say nor do anything that needs any kind of emotional involvement. Although we do like these soap operas that go on forever – they pay the bills.

R: Can you tell us something about the procedure that goes on behind the cameras and the microphones?
KN: Of course. Many people, for example, assume that we get a chance to see what we are going to dub over beforehand. That is not the case at all! We have our headphones on and we hear the original. The very first time we see our scene is after the minute we get our scripts, so we see the lips movement, the length and the mood of the characters. And then action! A couple more takes and moving on to the next scene. We don’t necessarily do the scenes in order. It also depends on whether or not we are sharing a scene with someone else. Of course the situation is different when we are re-dubbing. Last time we were working on Kevin Costner’s Robin Hood, which naturally we all knew by heart, so we had an easier time.
R: Are there any other actors with whom you just love to work with?
KN: Yes, Gábor Forgács. I simply fall off my chair laughing when I’m working with him. He is a real blast! We did Miami Vice together and it was really a great experience.
R: I have heard that you were responsible for the initiation of the cast of Vampires adopting a “flying dog”, as in a big bat in the city zoo. Do you still do charity work for animals?
KN: Yes, I try to be involved as much as I can. Unfortunately after you come to the realization that you cannot save every single animal, not matter how hard you try, it gets a bit harder. But if I get any requests to appear or judge, for example at contests, then I say yes immediately. I love these kinds of things.
R: Let’s say that you get a call from one of the big theatres tomorrow, offering you a lead role in the coming up musical. Would you accept it?
KN: Hypothetically, I would think about it … and where I am at right now, I would probably say no. It would be very tempting indeed! But … (She sat in silence, thought about my question for a minute or two.) Well, let’s admit that it is very unlikely.
R: Hypothetically, let us assume just the same.
KN: I would think about it because it depends also on the musical and the part I’m offered. Surprisingly, I do not miss it as much as I used to. I get my same kick of adrenaline from dubbing. Not to mention less stress! Also, the theatre pretty much destroys one’s social life. I and my fiancée are planning a family, and that would have to be put on hold for such a project. Maybe the only reason that would tempt me is to let my fiancée see me on stage, seeing that he never had the chance. I would probably be in a bit of a quarrel if it were one of my dream roles.
R: So there is such a role that could tempt you into saying yes?
KN: There is. I have always wanted to play Éponine in Les Miserables (Nyomorultak). But I never got the chance to. In these cases type casting comes in. We are pretty much told to stay in our own areas of expertise. But think of The Lion King: That musical won’t be available in Hungary for a very long time, as the contract stipulates that only African-Americans can be in the cast. It would be quite hard to find the two leads, not to mention a whole cast! … Now thinking about it, another role would be Éva from Valahol Európában. And although I missed out on these, my heart is at peace now.
R: Plenty of musicals have movie adaptations. Do you have a favorite?
KN: Well, I’m guessing the new Les Miserables will be it (coming out this December!). Look, come on! What do you want me to say? That I like all the classics? Hello, Dolly!, Funny Girl … I think that Hello, Dolly! is still one of the best ones. I know that it worked the other way around, but Mary Poppins is a favorite as well. What can I say? I’m still a child at heart. Rent would be another good example – it was done pretty well. Although I think that in our Hungarian version the actress who played Mimi, Gabi Mezőfi, did a far better job. Oh, and finally The Producers.
R: Thinking of the goals you set out for yourself, are there any things that you still need to conquer, or are you just trying to enjoy life at its fullest and try to be happy?
KN: The latest. Once you grow up from the idea that every dream can be conquered you start to appreciate things the way they are. It is also important to not hang on these ideals. It is not always just up to us, you know? So many things can come between you and your dreams and if you take it too personally you can’t really go on. There is always room for improvement. And being where I am right now, I can say that I have no complaints. What more could I want? Perhaps bigger roles? The time might come for that. People know me; know what I am capable of. They also trust me and that is very important. And that goes for everyone in this profession.