Why Should You Enjoy Green Lantern In Spite Of Public Opinion

You knew this was coming! Let's get down to it: 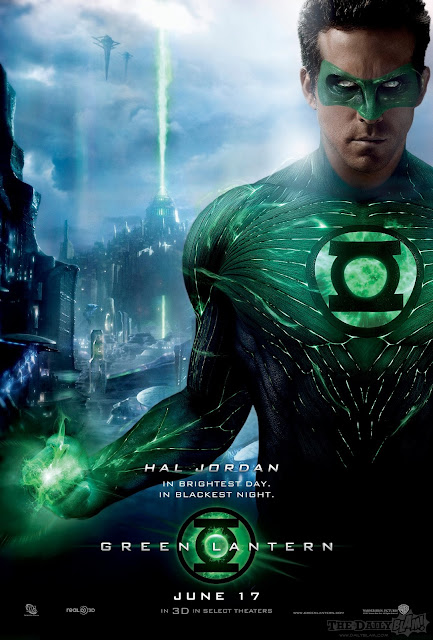 Hal Jordan is a test-pilot and while testing one of the airplanes an alien ship crashes near him. He gets closer to investigate only to find out that the ship crashed there on purpose. 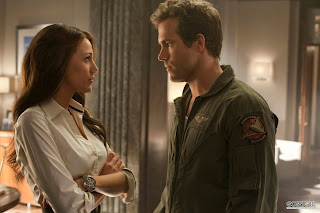 Its victim is one of the members of the intergalactic police force known as the Green Lantern Corps. Each time one of them dies they pass on their weapon, a power ring, to the next member of the corps (precisely the person that the ring chooses). In this case Hal is set to be the next: the first human to ever become a part of the Corp. As Hal takes on the power, he visits Oa, the planet of the Corp where he is taught how to wield the ring's power. As he returns to earth his first enemy appears, Parallax, a super-powerful being who feeds on fear. In order to defeat him Hal must put all fear out of his heart, however he does fear the safety of his soon-to-be girlfriend Carol Ferris. As Hal recites the lines to his oath, he defeats Parallax, but in the end we discover that one of his mentors, Sinestro has turned to the Yellow Lantern, the same one that fed Parallax.


In Brightest Day
In Blackest Night
No evil shall escape my sight
Let those who worship evil's might
beware my power
Green Lantern's Light! 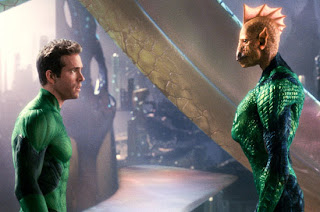 I was thinking very hard on what went fatally wrong with this movie and I can share with you my problems. First being that although Hal Jordan is 99% like Ryan Reynolds, he still isn't. There is that fine line and Reynolds crossed it far too often. This way his essence was pretty much lost for me. The second problem was probably Blake Lively, who seemed to forget that she is not on Gossip Girl anymore... the first half of the movie was great really, as it all seemed to work in the right direction - from cast to writing. Then something happened... and I know what it was for me. I just couldn't care less about Earth! FUCK EARTH! Why does every goddamn evil maniac want Earth??!! We don't have shit here! You know what I want to see? Oa! Oa is interesting as it is a whole planet designed for a police force with members all around the universe! Comics are a fantastical world, why the hell do we keep forcing things to happen on Earth? I know that there is this wild knowledge, the people get more emotionally involved if they see their own planet being destroyed and all the landmarks disappearing.. 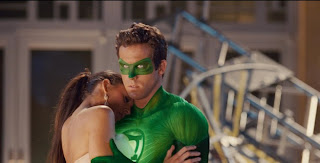 NOT ME!!! I have seen it in 300 billion movies, G.I. Joe starts that way, the Avengers consume New York (click here to read my review!), AND DON'T GIVE A SHIT ABOUT EARTH, I KNOW EARTH, I LIVE HERE!!!!! I WANT TO BE IN SPACE WHEN WE ARE DISCOVERING A COMIC CHARACTER WHO DOES IN FACT SPEND 70% OF HIS TIME IN SPACE!!!!!!! Do you want to know why the cartoon Green Lantern: First Flight works? Because they don't give a fuck about Earth! Yes, Hal is set to protect it one day, but seriously? I mean really, you spent all that time constructing the police force freakin' perfectly, and you give them 15 minutes of screen time? Fuck you DC comics and fuck you director Martin Campbell!

However, as far as origin stories go for people who aren't familiar with the character: it is a perfectly fine movie. On that account only one mistake was made, which is the credit scene in which we discover that Sinestro has turned sides - there is really nothing leading up to that, so people who aren't familiar with the story of Sinestro and his dealings with Hal, won't really get what happened there or why. It is basically a "of course we are making a sequel!" scene.
Basically the only way to enjoy this movie is keeping in mind that Hal needs to be presented to a wider audience in order for the writers to go into specific details that adhere more correctly to the comic. A sequel with Sinestro and Hal can barely be ruined, not even with Reynolds' constant misinterpretation of the character. 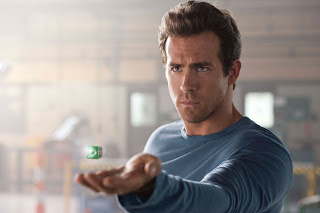 One last honorable mention: In the end, during his final fight Hal recites the Green Lantern oath and during that I was literally crying. That was a perfectly paced moment and it was really well done. If you are a fan of the comics or cartoons, you will really like that scene as it is absolutely the maximum you can ask for. Otherwise I am telling you that the first half works perfectly, the villain actually is awesome, all rewards to Peter Sarsgaard; the CGI works fine and Oa looks beautiful! It is worth checking out, especially if DC is smart enough to use this movie for it's Justice League disaster (sorry, not very optimistic on that part...). Anyway, my only consolation price is that it could have been far-far worse... trust me, with pointless fart jokes taking over Hollywood, if they wanted to make it more family friendly, I probably would've killed someone.

PS: According to imdb, the second one is going to be directed by someone else. Let's hope for the best!