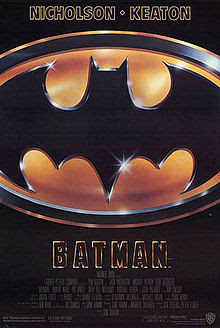 Bruce Wayne is a billionaire in the little city of Gotham, however he has a huge secret: he is Batman. A vigilante who punishes the criminals of Gotham city and helps the police. However, his true persona gets involved with a reporter, Vicki Vale, just as Gotham becomes the victim of a mad man: the Joker. Previously known as Jack Napier, the business man was a victim of an accident that scarred him for life and left him mad. Batman defeats him, but in the process is forced to give up on Vicki. 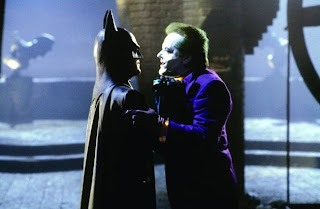 This movie is a classic and it should be. It is a typical Tim Burton film, however, he did grab the essence of Batman: He is the most kind and smiley person when he is Bruce, however, comes the cape on and he becomes a dark mysterious character. The Joker too I believe was dead on, even if personally I would've preferred someone a bit younger for the role. That said, it is not nearly as depressive as the ones Nolan did (click here to read my reviews!), so even for that it deserves two thumbs up! Make sure you check it out. 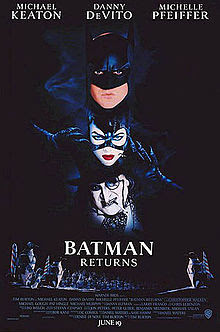 The Batman has a new enemy: the Penguin. A half penguin half human monster who lives in the Gotham sewers, only to arise to seek vengeance on those who wronged him. And as if that weren't enough, Bruce's heart is once again taken by a mysterious woman by the name of Selina Kyle, who unfortunately becomes his enemy as the villain Catwoman. Not even Bruce's love can turn her from her life as a criminal and taking on the Penguin might be more than the Batman can handle. 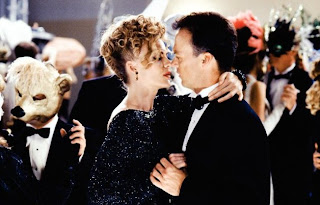 This is the typical sequel movie, meaning: it doesn't exist without the first one or without basic Batman knowledge. Even the first one I wouldn't define as an origin movie, but it still gives us enough hint to know everything we needed to understand the story. That said, I did not like this movie for one character in particular: Penguin. Every cartoon, every comic I got my hand on portrayed Penguin as this highly intellectual being who almost outsmarts Batman. But this movie showed him like grown up with a mom fetish and the mental status of a 5 year old... it didn't do anything for me other than disgust me. Also, too dirty. Even if I have to admit that I like the fact that we don't see Gotham in the morning light is a great choice, because it only emphasizes the need for a hero like Batman, however, there is a difference between dark and dirty. 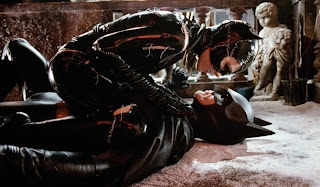 What I mean is, you might use a toilet if the light doesn't work, because who cares if it is dark? You won't be harmed on the toilet, even if you always have that 1% sense of creepiness. But you would probably think twice about it, if it was dirty... and you'd probably keep away. That is how I feel about this movie. I cannot re-watch it again because I keep thinking about those disgusting scenes with the penguin in his aquarium or what and I need to throw up... Anyway, as far as casting, adherence to the comics and the prequel goes, not to mention some dead-on comical timings, the whole movie is great. I also think that both directors, costume designers and actresses should learn from Michelle Pfeiffer. Her portrayal of Catwoman is dead on! I liked very much Anne Hathaway's version, but there were a couple of very big mistakes in the meanwhile... As I said it doesn't work without the prequel, but after you've seen this, you realize that neither does that without its sequel. This too is a classic, and even though many might object to it, it is worth taking a look! 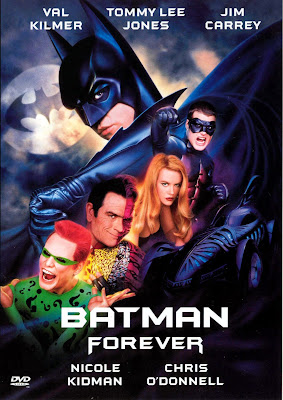 In this chapter Batman has to take on two known criminals, Two-Face and the Ridler, who team up to defeat the great vigilante. Thankfully, this time around he's got a sidekick with him who will just be enough to defeat them Dick Grayson, also known as Robin. 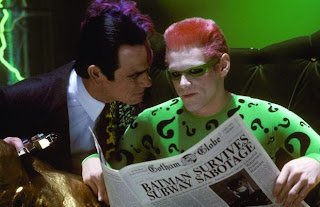 First thought: WOW Val Kilmer... you look nothing like Bruce Wayne! Not even close! However, you do a fine version of him. Bruce always had this incredible charm to him that usually women are not capable of resisting and although I find that the Clark Kent-like glasses were a bit stretching it too far on the nerd side... you were still plenty more enjoyable than the brick like Christian Bale. That said... this isn't the best movie ever. I'll admit that perhaps it was a bit rushed, BUT as far as the make-up and the characters go in comparison to the comics, they were pretty much dead on. The Ridler's costume looked great and Two-Face's masked caused me real nightmares when I was young, so yeah, that looked great too! I probably would've chosen a younger actor for Robin, but this movie was destined for a more mature audience, so I see that a young 12 year old boy would've really raised a couple of eyebrows. That is typically something you can only get away with in comics. Aside form Nicole Kidman, who I honestly don't remember doing anything at all in this movie, this too I think is a good one. Definitely worth watching if you like Batman and as far as 90's comic based movies good, this one I find is pretty great. 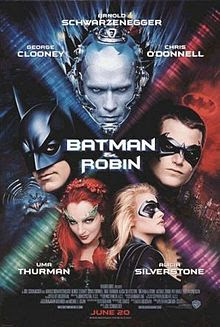 Batman and Robin are about to encounter one of their greatest villains yet, Dr. Freeze. He is a maniac professor who is trying to keep his dead wife alive while freezing here, not realizing it is too late. To help his evil plan, he turns to the help of Poison Ivy, however Batman has an ace up his sleeve: this time his team has another member Batgirl. Not to mention that something seems to be troubling Alfred's heart and mind. 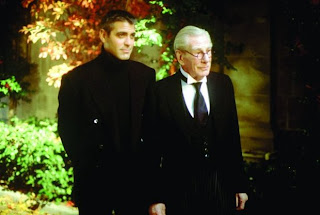 Before I go into analyzing this, I want to point out that I am not incredibly attracted to George Clooney, I don't really see why people love him so much. That said, he was the perfect Bruce Wayne. He looks like Bruce Wayne, he acted like Wayne and he has his charm. Clooney is the closest thing they had. However, this movie is horrible, as you need someone who can also play Batman, and he couldn't. No offence to him, he played him like he was scripted, and the script was awful too! First of all, you have an all star casting according to 1997 standard, which is not always (almost never) a good combination. Schwarzenegger? Really? Do not tell me that he was the best possible choice. Also, not sure if Uma Thurman pulled off a great perfomance in making me believe she can't act or if that was indeed the case. I'm betting it was the second one. And who told Chris O'Donnell to play Robin as if he was the greatest living man on Earth? He isn't. He is a sidekick! Lastly, this isn't something I like to brag about, because I believe Batgirl can be anyone, literally, except for a dumb blonde. And this version was a dumb blonde!
In case you are interested in my opinion, no. I did not mind the Bat nipples - I thought it was cute.
Bejegyezte: CsorEsz91 dátum: 4:53 AM